There Aren’t Many Jewish Foster Parents. This Group Is Trying To Change That. 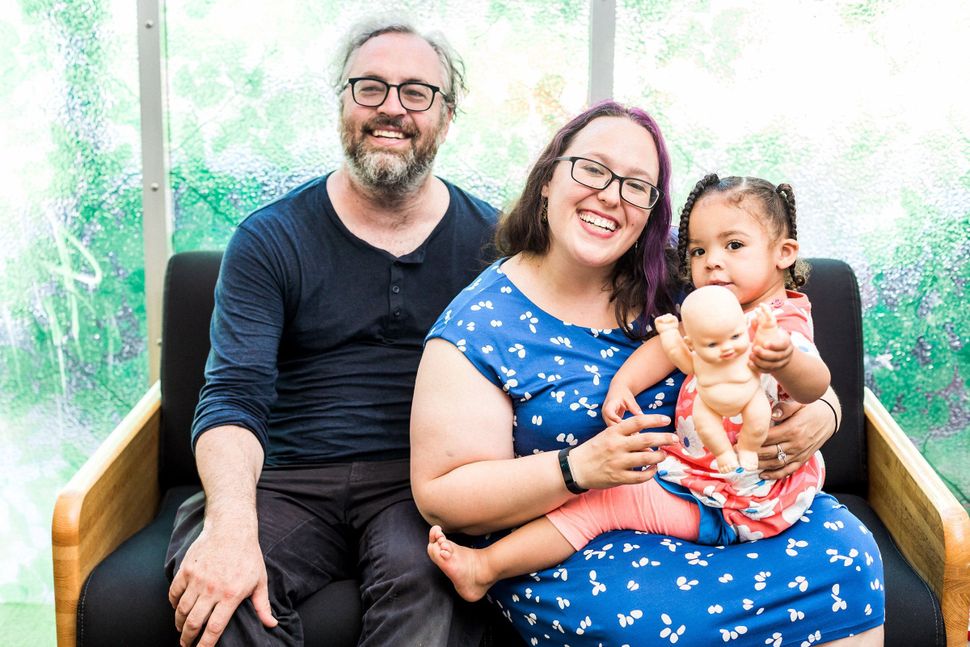 Tamar Fox with her husband and the daughter she adopted after fostering. Pictures of foster children cared for by other people in this story could not be used for privacy reasons. Image by Courtesy Tamar Fox

Allison Borsuk-Georgandas became a foster mother on Super Bowl Sunday, 2017. She was hosting her family for the game when foster care workers arrived with a 20-month-old boy who needed a loving home — right away.

The family sprang into action: Borsuk-Georgandas’ nieces, then 3 and 8, played with him. Her brother tossed a ball back and forth with him.

But after they left, it was just Borsuk-Georgandas and a scared, overweight child who struggled to communicate. She tried bathing him to calm him down — didn’t work. When she put him in the crib, his reaction made her think he had never seen a crib before. She held him until he fell asleep.

“It’s a very humbling experience for somebody to trust you when they’ve lost everything that they know in a matter of minutes, and they don’t understand what’s going on,” she said.

Allison was in the first cohort of fellows for Yatom, a Jewish foster care project. Yatom, which means orphan in Hebrew, is trying to bring more Jewish families into the public foster care network, where they can foster a series of children as needed or, in some cases, adopt their foster child. Foster care presents its challenges, including having to accommodate the child’s cultural and religious identities in a Jewish home. But Jewish foster parents say that it epitomizes the Jewish value of protecting the vulnerable, and that the Jewish community should start welcoming foster children like it has adopted children.

Rabbi Shmuly Yanklowitz, a liberal Orthodox rabbi, founded Yatom shortly after he and his wife decided to become foster parents. The group gives guidance and modest financial support to Jews who want to become foster parents, people who are trained and willing to host children of all ages who, for one reason or another, are no longer safe staying with their parents or guardians. Nationally, 30% of foster care guardians are related to the child; the rest are made up of people who voluntarily enter the system.

In 2016, Yanklowitz’s family received its first foster child, and Yatom started its work with its first cohort of prospective foster parents. They are currently working with their third cohort; each cohort number about nine fellows. The cohorts are given a small stipend, not more than $1,500, Yanklowitz says, which helps to offset costs like lawyer’s fees to diapers. Once a month, they participate in a webinar featuring experts on foster care, Jewish educators and veteran foster parents.

The fellows are largely couples and individuals looking to eventually adopt a child through the public foster care children, with a few families that already have children who want to host foster children. But Yanklowitz, whose family has now fostered six children, says that part of his goal is to get American Jews to see that being a foster parent can not only be a viable means to adoption, but also an end in itself.

“Hundreds of thousands of kids in the system — for some reason our community doesn’t pay attention to them,” he said.

Adoption has long been popular in the Jewish community. Some major nonsectarian adoption agencies started off as Jewish organizations, such as JCCA, in New York. According to a 2001 study of American Jews, they adopt children at twice the rate of the general population — 5% of Jewish families versus 2.5% of all American families.

But Jews strongly prefer using private agencies or adopting internationally to going through the public system. In the 1970s, 39% of all adoptions in the U.S. were through the foster care system, according to a 2007 study of adoption trends in the U.S. For Jews at the time that number was 29%, and by the 2000s, only 9% of Jewish families adopted from foster care, according to survey data and data from Jewish population studies compiled in a 2014 article in the Journal of Jewish Communal Service.

There are several possible reasons for this, according to Jennifer Sartori and Jayne Guberman, co-authors of the 2014 article and co-directors of a support network for Jewish adoptive families. For one, they say, many people think that children adopted privately and internationally are less likely to be traumatized than foster children — a mistaken view, Sartori says. Jews are also on the whole wealthier than non-Jewish Americans, and are more likely to be able to afford private adoption fees, which can stretch to $50,000.

“If you’re a Jewish family, and you foster kids who are not Jewish, particularly if they are older children that have a religious identity and a religious practice, then you as a foster parent have some complicated decisions to make,” said Sartori, who is the editor of the Shalvi/Hyman Encyclopedia of Jewish Women at the Jewish Women’s Archive.

In 2016, there were 437,000 kids in the foster care system nationally, about 100,000 of whom were eligible for adoption, according to the U.S. Department of Health and Human Services. Of those, only 58,000 were adopted. A quarter of the kids were African American, while a fifth were Hispanic. (The government does not track the religious identities of foster children.)

Foster parents are expected to respect the cultural identity of the child’s family, no matter how young the child is. That can mean putting up a Christmas tree, or taking the child to a mosque every week.

Borsuk-Georgandas, 40, has now hosted four foster children. She says she has tried to cater to each one according to their cultural needs. If they want ham, she gets them ham.

“I would provide for them, I just wouldn’t make it in my own oven,” she said. “It has to be even” — equal parts her cultural needs and theirs.

Lisa Lovett, an adoption professional in Boston who, along with her partner, has been a foster mother for four kids, said that she took her first long-term foster child — about 15 months — to her unaffiliated synagogue every week. When she disclosed that to the child’s Christian family, she said they were happy that their child had learned about the importance of consistent worship.

“There was a connection the way there might not have been with a completely secular family,” Lovett said. “That God language translates.” 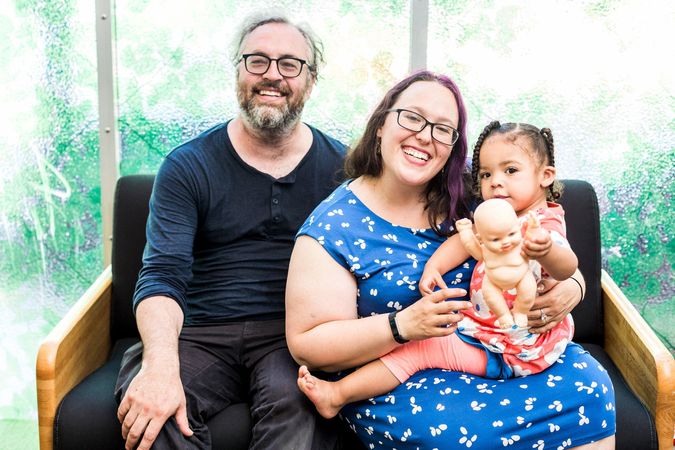 Tamar Fox with her husband and the daughter she adopted after fostering. Pictures of foster children cared for by other people in this story could not be used for privacy reasons. Image by Courtesy Tamar Fox

“That feeling, of we have to look out for people who are in danger, feels like a pretty deeply held Jewish value,” said Tamar Fox, a writer who has fostered two children, one of whom she adopted. (Fox has written for the Forward.)

To be sure, the Orthodox Jewish community has a strong tradition of fostering children who come from strictly observant homes, according to Daniel Pollack, a professor at Yeshiva University’s Wurzweiller School of Social Work. He said that strong social connections in the Orthodox world can lead to faster placements for children needing temporary shelter. OHEL, a family services provider in Brooklyn, is the go-to organization for finding homes for children from Orthodox families in the New York City area.

Yatom is trying to fill the gap for more liberal Jewish families. Yanklowitz says that they have a list of hopeful Yatom fellows for their next cohorts. Though their total budget isn’t more than $25,000 — Yanklowitz says he doesn’t draw a salary — the project’s next step is to become its own organization with a dedicated staff. Yanklowitz, who has helped run several nonprofit organizations, says he has not been able to readily find major Jewish sources of funding that might support Yatom and its foster care mission.

“Our primary goal is to help children,” he said. “But we also want to help Jews demonstrate their love in ways that they want.”

But there is always the specter of having to return the child to their family, which can give any prospective foster parent pause.

Update, 2/28/19 — This article has been updated with information about adoption statistics, and a clarification about the data in a Journal of Jewish Communal Service article.

There Aren’t Many Jewish Foster Parents. This Group Is Trying To Change That.