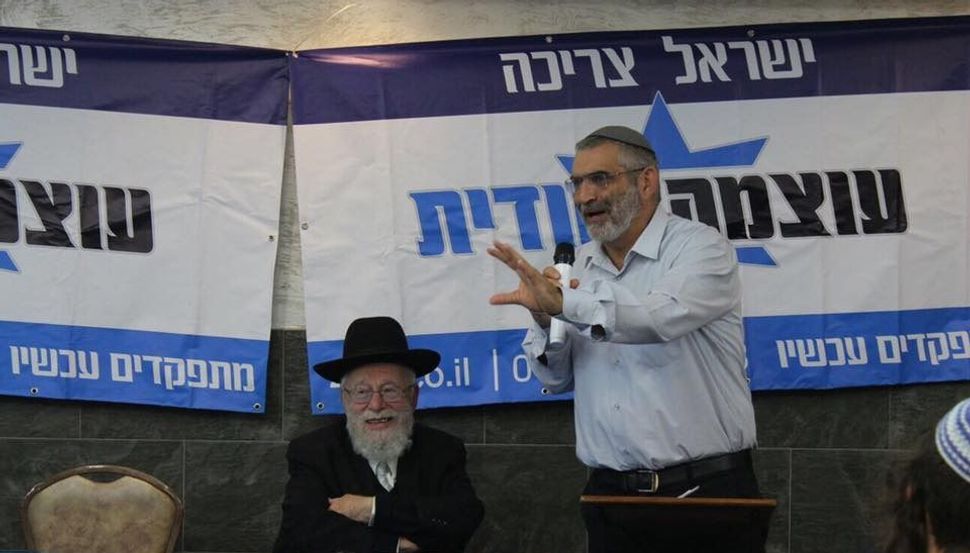 When Israeli Prime Minister Benjamin Netanyahu worked earlier this month to bring into his government a disciple of the racist rabbi Meir Kahane, American Jewish groups sprang into action in an unprecedented way.

The surprise? Centrist groups like AIPAC – which almost never make public statements criticizing Israeli politics or policies – did exactly that. But their statements didn’t go far enough for some left-wing groups, who jumped on the centrists for calling out the extremists without mentioning Netanyahu directly. And then pro-Israel groups on the right told everyone else to back off.

The free-for-all shows that the idea of a singular “American Jewish community” is a myth, experts say. Fractures are growing even wider as a result of technological changes, continued disputes about Israeli policies, and even fundamental disagreements about Jewishness itself.

“The key thing to my mind is the resurgence of anti-Semitism,” said Dov Waxman, a professor at Northeastern University who studies American Jewish attitudes toward Israel. “If ever a Jewish community is going to come together and unify, it’s around an external threat. And what we’ve seen over the last few years, even in the aftermath of Pittsburgh, is even then, there were differing reactions and divisions over why this is happening, and whether the Trump and Netanyahu governments responded appropriately.”

Born in Brooklyn in 1932, Kahane started out as a pulpit rabbi before turning to activism after his contract wasn’t renewed. In the late 1960s, he did enjoy some support in the United States due to his outspoken advocacy for oppressed Soviet Jews. He lost legitimacy after his tactics changed from angry protests to violence and terrorism, however.

After receiving a suspended five-year sentence for manufacturing explosives in 1971, Kahane moved to Israel and started a movement dedicated to founding a Jewish theocracy with no Arab presence. By 1984, he won a seat in the Knesset, Israel’s parliament – where everyone else left the chamber during his speeches.

His party was banned for racism in 1988, and he was assassinated in 1990. Kahanist groups have been declared terrorist organizations in the U.S., Israel and the European Union. But Kahane’s legacy has lived on in some pockets: Baruch Goldstein, a Jewish terrorist who killed 29 Muslim worshippers in 1994, was a Kahanist, and other disciples have been elected to the Knesset before – albeit not in the governing coalition.

In 2012, an entire party devoted to Kahane’s ideals, Otzma Yehudit — which means “Jewish Strength” — was formed. The party failed to meet the minimum vote count in the last two elections and wasn’t expected to succeed at the polls this April. But Netanyahu convinced an existing right wing religious party, Jewish Home, to merge with Otzma, allowing them to combine their vote totals, earn entry to the Knesset and help prop up Netanyahu’s government.

The fact that the American Jewish community had repudiated Kahane fifty years ago left many angered and perplexed by Netanyahu’s move, explained Yehuda Kurtzer, the president of the Shalom Hartman Institute of North America think tank.

In this case, an outcry came not only from dovish groups like J Street, but also from quarters that rarely speak against Israel.

Most notably, AIPAC and the American Jewish Committee, two major organizations that pride themselves on bipartisanship and almost never criticize the Israeli government, spoke out two days after the merger was announced, calling Otzma Yehudit “reprehensible.” (Full disclosure: I interned for AIPAC for a college semester) But those groups’ statements did not specifically assign blame to Netanyahu, who had brought that party from the political fringes to prominence in the first place. This exposed them to criticism from the left for not calling out Netanyahu directly and the right for making such statements at all.

Malcolm Hoenlein, the longtime leader of the Conference of Presidents of Major American Jewish Organizations, also expressed his concern. “What we have to deal with is how it is perceived and understood in the United States,” he told the Times of Israel. “And we have to be very careful because it feeds certain tendencies that are very concerning to us.”

The Jewish Council of Public Affairs, an umbrella organization representing more than 125 Jewish domestic advocacy groups around the country, said in a private letter to Netanyahu obtained by the Forward that the merger provided legitimacy for Otzma’s racism and also “may well damage Israel’s standing in the U.S. and the broader international community.” The JCPA last criticized Netanyahu in January 2018 for threatening to deport African refugees.

Some Orthodox synagogues also criticized the merger; the Connecticut shul Young Israel of West Hartford called it “morally bankrupt politicking” in a statement.

These statements, public and private, aligned centrists and even Israel hawks like Hoenlein with a liberal camp that is already much more comfortable criticizing Israel – like the Union for Reform Judaism, the largest Jewish denomination, whose press release called out Netanyahu specifically.

Why did Netanyahu’s maneuver trigger such outrage? Kurtzer said that it was because condemning racism, and avoiding associations with racists with links to terror-tied ideologies, was a “slam dunk” – which made it all the more perplexing that the merger happened in the first place.

But Waxman pointed out key differences in how groups reacted. Among liberal Zionists, he said, “there’s a growing concern about the drift of increasing illiberalism in Israeli politics.”

“That concern is very different than the concern from Malcolm Hoenlein,” he continued. For centrists, “the problem is that it makes it harder to make Israel’s case.”

And then there were organizations that defended Netanyahu, or at least were anti-anti-Netanyahu, like the Zionist Organization of America – a right-wing organization with a relatively small membership but with the ear of the Trump White House.

ZOA leaders said in a statement that it was “strange, troubling and hypocritical” that groups like AIPAC and AJC had called out extreme right-wing parties but not Arab-Israeli parties that have also been accused of inciting violence.

The intensity of those criticisms generated similarly intense disagreements. Leaders of Young Israel synagogues in Connecticut and Georgia have criticized their national movement for making a statement saying they “understood” Netanyahu’s actions.

Kurtzer said the disagreements were exacerbated by the flattening powers of social media, where a group with 2,000 members can have the same visibility as an opposing group with 200,000 members.

Of course, internal disagreements within the Jewish community are nothing new.

“There’s no unanimity,” Kurtzer said. “If you got up and said the sky is blue, you’d have 11% of the Jewish community disagree with you.”

But Barry Shrage, the former longtime head of Boston’s Jewish federation, said the incident actually showed there was more common ground than people would expect.

“I think the American Jewish community, the vast majority do want a two-state solution, but they do on the other hand also trust the people of Israel and are a little reluctant” to criticize a besieged foreign country.

The varying responses, and the responses to the responses, show that American Jews are continuing to clash on fundamental issues of identity – not just on support or opposition for Israeli policies, but on the propriety of making statements in opposition at all.