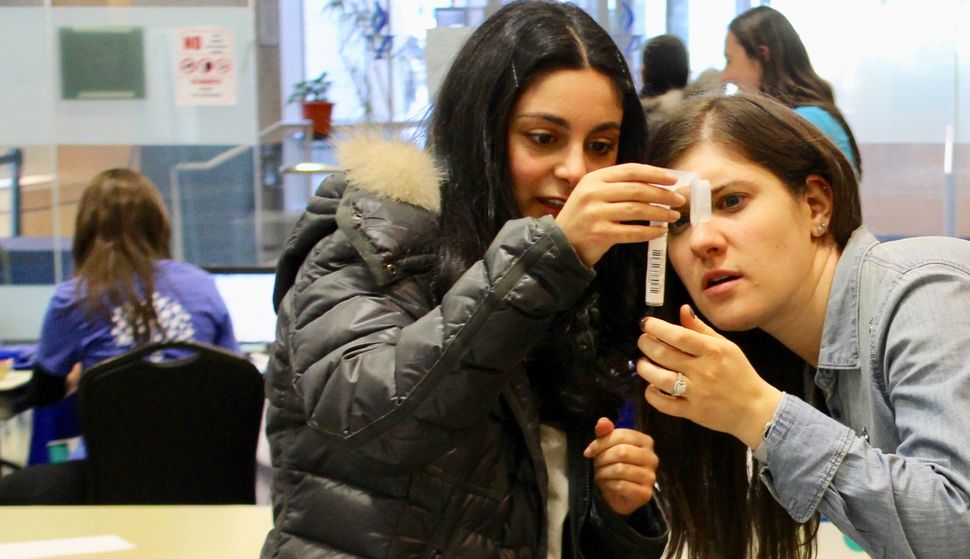 It only takes two milliliters of spit — less than half a teaspoon — to map your DNA. But, as it turns out, that’s kind of a lot of spit.

“Think of lemons, or pickles,” said Talia Kupferman, an on-campus volunteer for JScreen. Try massaging your jaw, she suggested.

The students were there to complete JScreen’s registration process, and send off the saliva samples that will tell them if they are carriers for any one of 226 genetic diseases and conditions, dozens of which are closely associated with Ashkenazi Jewish genes. In the Orthodox world, where marriage is on the horizon just after college and family-making is the end goal, the test can loom large for some.

When people finish spitting, Kupferman said, they often sigh with relief: “‘Okay, that was it. I just had to spit, and I did something really important for my future.’”

JScreen was founded in 2013, and was first aimed at reaching Jewish couples who are preparing to have a child. For this year’s sessions at Yeshiva, they received a special grant that allowed them to bring the cost of testing down to $36 from the usual price of $149. The last time JScreen came to Yeshiva University, in February 2016, they collected spit from 1,200 students in three days.

This time they set up in a small conference area inside one of the buildings on Yeshiva University’s Stern College for Women campus, on Lexington Avenue in Manhattan. On a plastic folding table facing the entrance to the room they set up a couple computers and laid out JScreen swag. On a second table over 300 pre-registered boxes, containing 300 plastic saliva vials, were arrayed alphabetically in rows of eight.

The diseases that JScreen tests for take up an entire printed page, laminated and stuck to the check-in table: from ABCC8-related hyperinsulinism to Wilson disease — both of which are relatively common for people with Jewish ancestry. Most of the tests are more relevant for Jews of Ashkenazi, or Eastern European, descent, who make up the vast majority of American Jews, and have more particular diseases associated with their gene pool, while some are for diseases closely associated with Sephardic Jews, whose ancestors hail from southern Europe.

Students showed up for their spit-takes in between classes. One moment the room would be empty except for Regelman, the genetic counselors and JScreen volunteers, and a few minutes later it would be filled with young women alternatively spitting and giggling into their plastic vials. Only a few men stopped by to spit; JScreen has another event planned at Yeshiva’s men’s college, in upper Manhattan, next month.

When the students entered, they were greeted by Estie Rose, a genetic counselor for JScreen. She would locate their pre-registered vial, remind them of their pre-spitting prohibitions — no eating, drinking or smoking for 30 minutes prior — and show them the all-important 2 millimeter line. Bubbles above the line!

“We have to approve your spit,” Rose told one student. 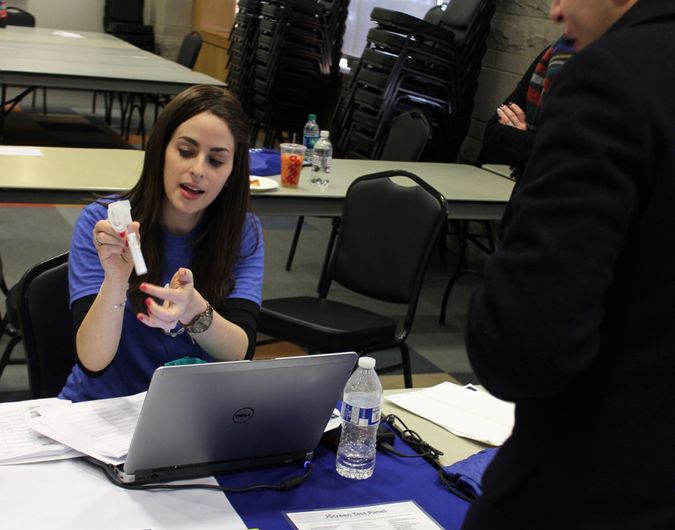 After receiving their vials and their instructions, three friends huddled together to begin the spitting process. They wore a common Modern Orthodox weekday outfit designed for modesty: dark shoes, dark stockings, dark knee-length skirt, dark top. Between laughing at the undeniable goofiness of being tied to a plastic tube until you can salivate into it sufficiently, they mused on the meaning of the screening: preparing for relationships, marriage and children.

“We’re in the dating process,” said Yael Attias, a junior. “It’s not something that’s crazy down the line.”

Sarah Zusin, a senior, said that her mother told her to go — earlier is better than later.

“Why wait?” Attias agrred: If you delay the test, it just delays everything else that is coming anyways.

“Can you check my spit?” their friend Miriyan Goldman, a sophomore, interjected. They paused to examine her vial: She had a couple millimeters to go before the bubbles passed the line.

Would they ask their fiance to get tested? Their boyfriend?

“I would ask them to do it,” said Zusin. “I think most people would do it. Especially within the Ashkenazi population, there are so many diseases that are prevalent in our community, so it’s better to be safe than sorry.”

Attias agreed. But, she noted, it’s still a scary decision.

Once you know, she said, “then you’re living with this.” 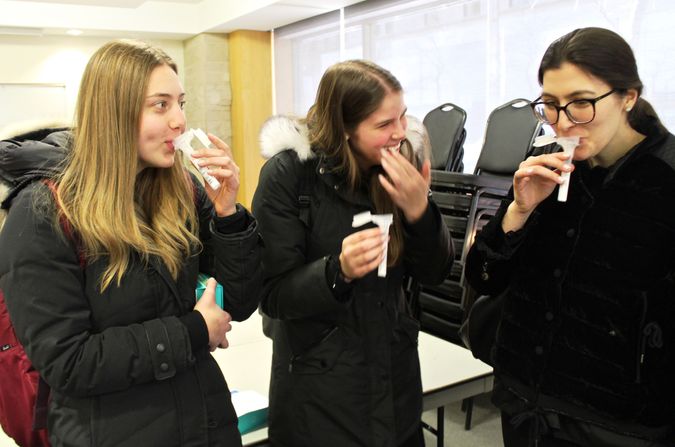 JScreen is seeing expanded use of its testing services as more and more Jews open up to learning about their genetic codes. Several years ago, getting screened for diseases like Tay Sachs, Canavan disease and others would typically require a couple to make a doctor’s appointment, followed by a visit to a genetic counsellor.

Ronit Liebor, a Stern College graduate and a genetic counselor with the company that JScreen contracts to perform its testing, said that she never had an event like this when she was an undergraduate. Jews, and especially young Jews, seem more open to the testing now, she said.

“People have the mindset that, we’re Ashkenazi Jews, chances are we’re going to be a carrier for something,” she said. 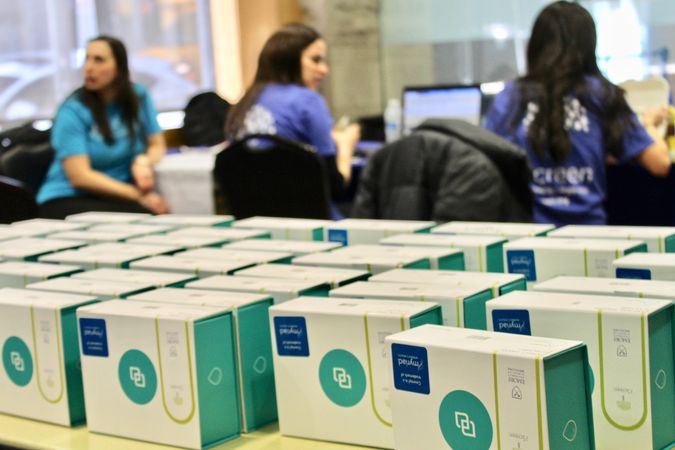 JScreen set out 300 pre-registered boxes for the event. Image by Ari Feldman

Now, curiosity can motivate someone to get tested as much as apprehension about having kids. Zipporah Spanjer, a junior biology major, said she’s taking the test partly out of scientific interest.

“I’m familiar with what happens when you have interbreeding populations, for lack of a [better term],” she said. “You don’t like to think of the term ‘interbreeding’ when you’re talking about humans, but it is what it is.”

Spanjer said that, in her circle, some people say they’ll refuse to date someone unless they’ve been tested.

“Which I think is a very reasonable way to do it, because youre not starting off a relationship until you know that that’s not gonna be an obstacle,” she said. “And that cuts down on the heartbreak, and I think it’s just good practice.”

But, she added, for her it’s not crucial: She recognizes that there are ways to get around certain genetic barriers, like in-vitro fertilization that removes embryos that may have a certain disease. And there’s always adoption.

“There are more kids than there are parents who can take care of them in this world,” she said. “So if it turns out to be an issue, then fine.” 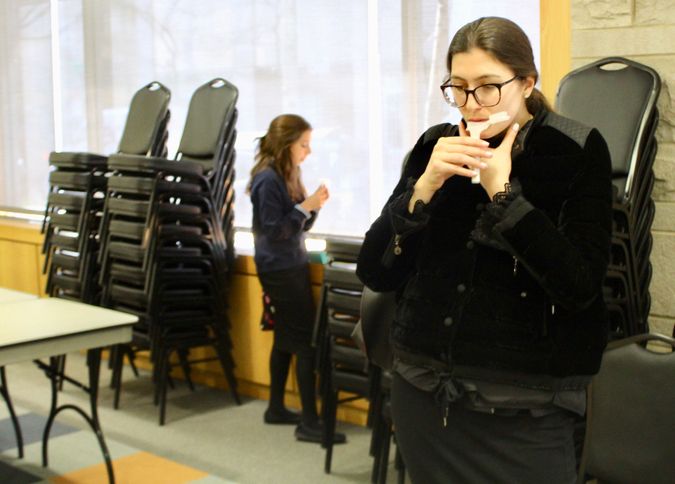 Sarah Zusin massages her gums, hoping to get to the necessary 2 milliliters of saliva. Image by Ari Feldman

About a half-hour after first entering the commons, Sarah Zusin was still there, trying to get her saliva to the finish line. It’s close to the end of the event, and only a couple dozen vials have gone unfulfilled.

“My mouth actually feels so dry,” Zusin said, standing off to the side after her friends had many minutes ago secured the tops of their vials and slipped them into their designated lab bags.

One of the genetic counselors decided to call it: “It’s time to close the tube,” she told Sarah.

“Do it over the trash can, though,” said Rose — she worried that all the bubbles in the vial might spill over the sides.

“We have a glamorous job,” Rose said. 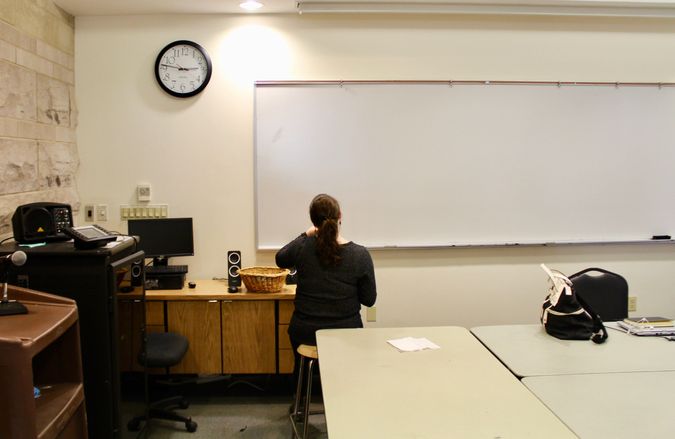 A student finishes her spitting in private. Image by Ari Feldman