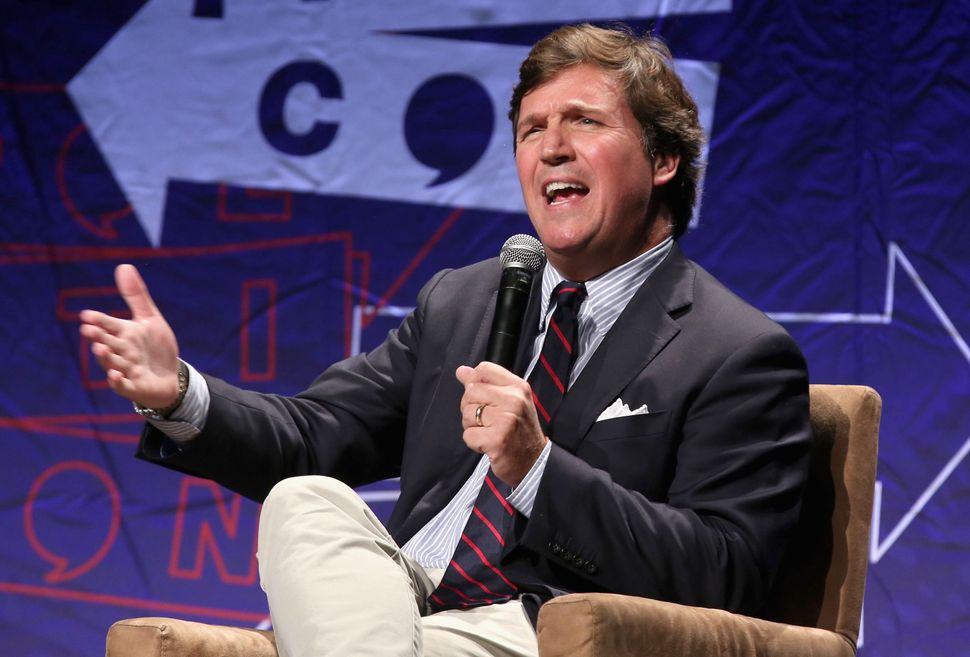 Here’s what white supremacists said about Fox News Channel host Tucker Carlson when they thought no one else was looking:

“A lone voice of reason in the media.”

“Tucker is a blessing, def[initely] our guy.”

The uproar this past week over numerous recently-uncovered insensitive comments Carlson made on a radio show overshadowed news that could have been even worse for him: A massive leak of internal chat logs from Identity Evropa, one of the leading white supremacist groups in America, showed that many members were huge fans of Carlson and the ideas he espoused every night to millions of viewers.

Even though white supremacist groups themselves have largely gone underground – either due to financial pressures, fear of their identities being revealed or infighting – they have continued to try to push their ideologies into the mainstream. And they see Carlson as a key component in that effort.

“Tucker Carlson has long been praised by white nationalists as being one of them or supporting their talking points,” Spencer Sunshine, an associate fellow at the think tank Political Research Associates who studies far-right movements, told the Forward.

Fox News did not respond to a request for comment.

In December 2018, one user described a “Twitter food chain” where information passes from white supremacist podcasts and YouTube shows, to Rep. Steve King and commentator Ann Coulter, to Carlson, to President Trump. A similar comment was made two months later: “Tucker is basically the only funnel from the base to [Trump] at this point.”

Carlson has been making racist comments for over a decade, the left-wing organization Media Matters for America revealed this past week.

During Carlson’s weekly call-ins with shock jock Bubba the Love Sponge from 2006 to 2011, the future Fox News host made many remarks that made distinctions between racial groups. White men, Carlson said in 2008, deserved credit for “creating civilization”; earlier that year, he said people in Iraq (the actual birthplace of human civilization) weren’t behaving “like human beings.”

White supremacists may have been primed to look for similar sentiments on Fox, and they found them. Indeed, Carlson has ramped up his rhetoric since starting his Fox News show a week after President Trump’s election in 2016. He quickly became a favorite of the so-called “alt-right” and continued to make statements that could be read as either standard cultural conservatism, xenophobic fear-mongering about immigration and diversity, or outright white nationalism.

However a listener hears them, however, experts say that Carlson is one of the white nationalist movement’s best megaphones, because by using his platform to reinforce their notions, he is making them more acceptable.

“Tucker Carlson probably has been the No. 1 commentator mainstreaming bedrock principles of white nationalism in this country, which is fear of immigrants, fear of Muslims, keeping them out and arguing that whites are under attack,” Heidi Beirich, the head of the Southern Poverty Law Center’s Intelligence Project, told Salon last August.

Carlson has amplified white nationalist phrases and talking points to his 2.8 million average viewers – including President Trump, who has echoed them.

A segment last August about violence and proposed land seizures against white farmers in South Africa – a narrative frequently promoted by white supremacists – was glommed onto by Trump, who tweeted that he had ordered Secretary of State Mike Pompeo to investigate the issue. The Anti-Defamation League was aghast, saying in a statement that it was “extremely disturbing that the President of the United States echoed a longstanding and false white supremacist claim.”

The leak last week of more than 770,000 messages in Identity Evropa’s Discord chat forums showed that they saw the South Africa incident as a victory for their ideology. One user urged members to promote the segment on social media and turn it into a recruiting tool.

Carlson has also cast himself as a defender of causes that just so happen to also be promoted by white racists – objecting to the removal of Confederate statues, defending the extremist-friendly social network Gab, criticizing the United Kingdom’s decision to ban white supremacists from entering the country.

And he also alludes to the perceived inferiority of non-white people. Last December, for example, he claimed immigrants made the United States “dirtier,” which led at least 30 companies to say they wouldn’t air ads on his show anymore. More have left since the Media Matters investigation dropped.

To be sure, Carlson has frequently denied that he uses his platform to disseminate and sanitize white nationalism. But many media critics – and perhaps most saliently, white nationalists themselves – continue to think he’s doing so.

Sunshine cautioned against trying to read Carlson’s mind for proof of his ideological intentions. “We don’t know if he’s intentionally, self-consciously thinking like a white nationalist and soft-selling it,” he said. “But I think we can see empirically that…what he’s saying harmonizes with white nationalist views. And we can see that when they say it [does].”

Carlson has also been praised on the white supremacist website The Daily Stormer and podcasts like The Daily Shoah. Former Ku Klux Klan leader David Duke declared last year that Carlson is one of “the voices we have in the media on our side.”

Ultimately, the extent to which Carlson continues to promote dialogue that white nationalists approve of will be governed by whether the experience chastises him – or whether the advertiser exodus forces Fox to take tighter control. So far, things appear to be continuing largely as before.

Carlson was defiant on his shows this week. He said he was being targeted by a “liberal mob.”

“These are the people who write our movies and our sitcoms,” he said on Monday. “They are not shocked by naughty words. They just pretend to be when it’s useful. It’s been very useful lately.”