The White Supremacist Movement Is Down – But Definitely Not Out 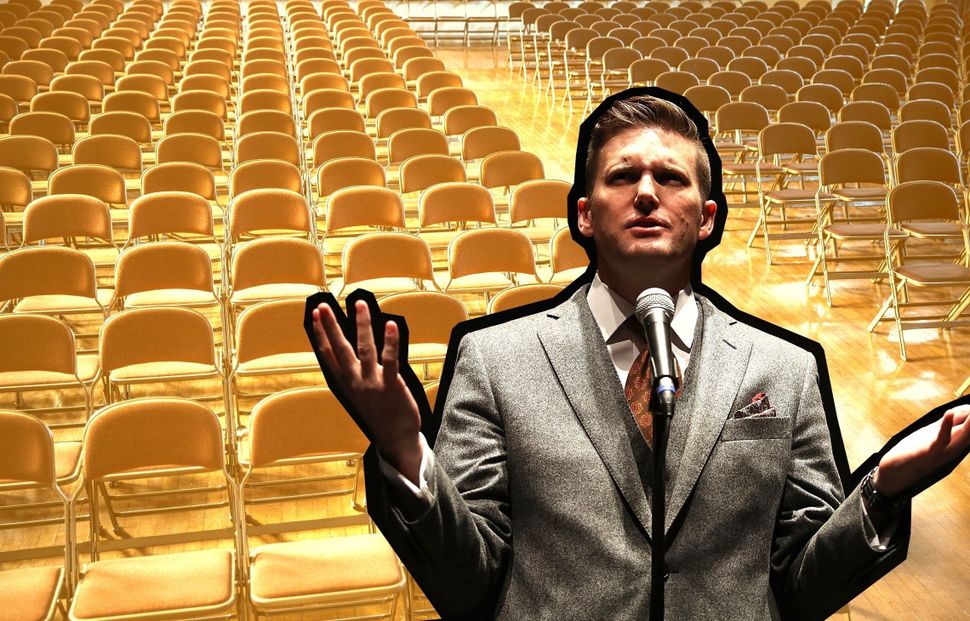 A little over a year ago, Richard Spencer was riding high — a finalist for the Dallas Morning News’ “Texan of the Year” award for his “uncommon negative impact” as a newfangled kind of white supremacist.

Yet today, Spencer and his allies in the so-called “alt-right” — a term he coined to describe the neo-white supremacist movement emboldened by President Trump’s candidacy and victory — are in a very different place. They’re the targets of multiple lawsuits, banned from popular social media platforms and online payment providers, monitored by federal agents and antifa activists, and riven with infighting over tactics.

And on a scale of 100, the popularity of “alt-right” as a search term fell by more than half between January 2018 and January 2019, according to Google Trends. AltRight.com, founded by Spencer in 2010, hasn’t been updated in seven months.

“There are only two or three groups that are really doing stuff, as opposed to a dozen last year,” said Spencer Sunshine, an associate fellow at the think tank Political Research Associates.

But even as the movement’s leaders and organizations struggle, their ideology has continued to inspire violence.

The white supremacist movement is cyclical, said Marilyn Mayo, a senior research fellow at the ADL’s Center on Extremism. “That’s what we’re seeing – they went through a period of great expansion, then they contracted…but it doesn’t mean that they’re gone.”

The Anti-Defamation League reported last week that right-wing extremists were responsible for more murders in 2018 than any year in the last two decades.

Experts say the alt-right’s “Unite the Right” march in Charlottesville — perceived as a watershed moment for them at the time — was a curse in disguise. The widespread media coverage of the rally and its leaders led many marchers to be publicly exposed, or doxxed, in some cases causing people to be fired or drop out of school. Fear of further doxxing “pulled people away from the movement,” Mayo explained.

Unite the Right also led to multiple lawsuits. White supremacist leaders and organizations tied to the rally are being sued in civil court over an alleged conspiracy to commit violence, in a case led by attorneys Roberta Kaplan and Karen Dunn of Integrity First for America. Andrew Anglin, the editor of the neo-Nazi website The Daily Stormer, is being sued for allegedly orchestrating an anti-Semitic “terror campaign” of trolling and harassment against a Jewish women in Montana who had been critical of Spencer’s mother. That case is being supported by the Southern Poverty Law Center, which used similar civil court tactics to bankrupt chapters of the Ku Klux Klan in the 1980s.

Some of their efforts to maintain the spotlight have been downright comical. Spencer’s attempted college tour ended in catastrophe after only a few dozen people showed up for his speech at Michigan State University – who only agreed to host him if he spoke in their agricultural school’s livestock barn. The Traditionalist Worker Party, one of the white supremacist groups most willing to resort to violence, fell apart after group leader Matthew Heimbach slept with the wife of his second-in-command, who was also his father-in-law.

The continued doxxing of white nationalists – many of them serving in law enforcement or the military – likely also deterred many from affiliating further with white nationalist or white supremacist movements, experts say. And it led many existing groups to scale back their public appearances for fear of being identified.

Identity Evropa is one group that’s still active. It has posted flyers on campuses across the country and periodically conducts “pop-up” events before quickly dispersing. Their materials call on whites to “save your people” but don’t contain swastikas or slur other races.

“They’re trying to find a way to get their ideas out there but not alienate disaffected whites by presenting the most well-known hate symbols,” Mayo explained.

Although white supremacist groups themselves may have declined in visibility, individuals and small groups radicalized by their ideology have taken action. The ADL’s report lists 17 attacks conducted by right-wing extremists, including the perpetrators of shootings at Marjorie Stoneman Douglas High School in Parkland, Florida (where the killer belonged to a racist and anti-Semitic Instagram group) and the Tree of Life synagogue in Pittsburgh (where the gunman, Robert Bowers, was an active member of Gab, the Twitter-like platform popular with white racists).

If anything, Sunshine argued, “Pittsburgh affected the left more than the right.” Many on the anti-Zionist left were convinced that most allegations of anti-Semitism were just ploys to silence criticism of Israel, he said. The deliberate targeting of Jews for death caused them to “put anti-Semitism back on their list of ‘isms’ you’re opposed to.”

White supremacist groups may be in disarray, but they are committed to working to “figure out…how to mainstream their ideas,” Mayo said. She pointed out that Rep. Steve King has frequently made white nationalist statements under the guise of talking about “Western civilization.” Other Republican members of Congress have been spotted speaking with alt-right activist Charles C. Johnson.

“We should always be concerned and vigilant about white supremacism,” Mayo said. “You don’t know what’s going to turn a person who supports this ideology into someone like Robert Bowers, when they go from talking on Gab to taking action.”

This story was updated to add additional information about the civil lawsuit stemming from the “Unite the Right” march in Charlottesville.

The White Supremacist Movement Is Down – But Definitely Not Out