What A Jewish Journalist Saw In Charlottesville 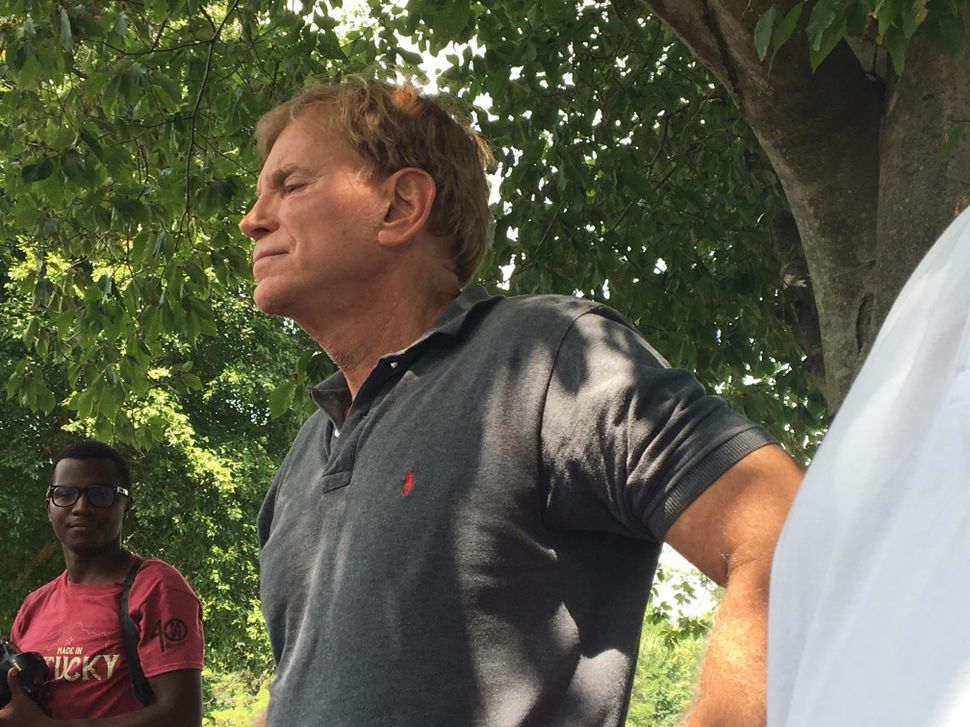 A founder of modern American neo-Nazism, David Duke told supporters in Charlottesville that they were “taking America back.” Image by Nathan Guttman

I had come to Charlottesville, Virginia for the “Unite the Right” rally to gauge the level of Jew hatred, amid all the racism and bigotry. So when, after a night of hate-filled demonstrations and a morning of clashes, the mayor cancelled all permits and kicked the white supremacists out of Emancipation Park, I wasn’t sure what to do until I got wind of a rumor that one hard-core gang had decamped to another park in this idyllic college town.

I headed to McIntyre Park with a few other reporters and was glad — if that’s the right word — to find a crowd of about 100 flowing into the space. A few miles away in downtown, a driver had rammed his car into counter-protesters, killing one and injuring 19. But in McIntyre Park, a riotous group of men — one bare-shirted, the better to show off his swastika tattoo, another being treated for a deep gash in his head — was shouting angrily, at reporters, communists, socialists, bitches… and Jews.

“[L]ittle Mayor Signer — SEE-NER — how do you pronounce this little creep’s name?” asked Richard Spencer, a right-wing leader who dreams of a “white ethnostate,” as he stood on a bench under a tree to rally his troops, deprived of their protest.

The crowd knew exactly how to pronounce his name: “Jew, Jew, Jew, Jew” some shouted out. The rest burst out in laughter. And that was one of the only moments of levity the alt-right audience gathered under the tree enjoyed.

After stepping down from the bench, I asked Spencer about the reference to the mayor and his faith. Signer, a Democrat who assumed office last year, is Jewish. 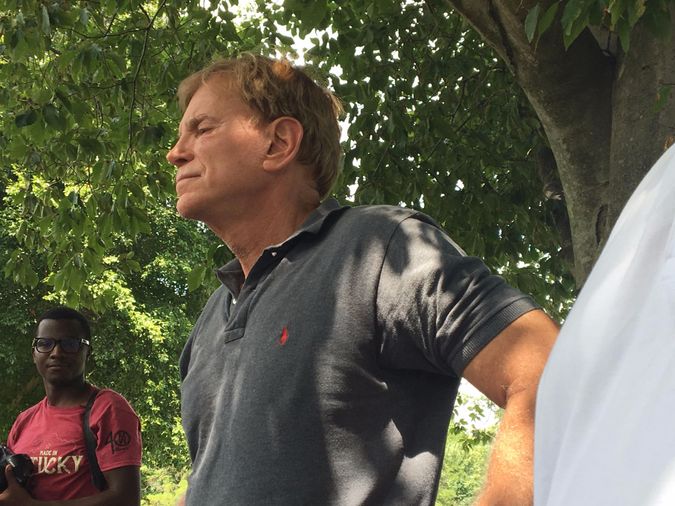 A founder of modern American neo-Nazism, David Duke told supporters in Charlottesville that they were “taking America back.” Image by Nathan Guttman

A member of the group of supporters surrounding Spencer and the reporters volunteered an answer: “He is a Jew.”

“I actually don’t care. He could be Ethiopian,” Spencer added. “The way that he acted is absolutely outrageous. He looks like a fool and we’re going to make him look like an even bigger fool. That’s a lot of fun.”

When another reporter asked Spencer why he is using offensive language when speaking about a mayor who was democratically elected by residents of the city, Spencer responded: “Who cares? Hitler was elected. That’s what you guys always say.”

But then Spencer, a relatively young member of the American far right, was eclipsed by the arrival of an elder of the movement with even more name recognition and status.

“Duke, Duke, Duke,” the crowd chanted, as David Duke, the former KKK leader and poster boy of modern American neo-Nazism, walked straight into the supportive audience and stepped up to the bench-turned-podium.

“The courage you showed today in Charlottesville,” he told his supporters. “This is a first step toward making a realization of something that Trump alluded to early in the campaign — this is the first step toward taking America back.” And he explained: “European Americans face massive discrimination. Truth is that we’re being ethnically cleansed in our own nation.”

Later in the day, President Donald Trump criticized the events of the day and said such hate had no place in this country. He put the blames on “many sides” and ignored reporters who asked him why right-wing leaders like Duke feel inspired and supported by Trump.

A young couple of counter-protestors approached and began to heckle Duke. A small group of his supporters engaged in a profanity-laced shouting match with the couple, as Duke tried to complete his speech.

A minute later, organizers whispered in his ear that “something was going on” downtown. Duke apologized for cutting his remarks short and warned that more counter-protesters were on the way. It was time to leave, but not before one last shot of anti-Semitism.

Supporters broke out spontaneously with calls “The goyim know, the goyim know,” voicing a common neo-Nazi meme that implies a Jewish conspiracy behind attempts to shut down voices of the “goyim” — Yiddish for gentiles.

The small group dispersed quickly as phones began to light up with the news alerts of the alt-right car attack against counter-protestors. The couple heckling Duke lingered on for another round of back and forth insults with the white nationalists as they made their ways to their cars, some carrying Confederate flags, others sporting bandaged fresh wounds from the day of battle.

They refused to talk to answer any more of my questions, even though I made sure my hand covered the old sticker in Hebrew on the back of my recorder.

What A Jewish Journalist Saw In Charlottesville