Does Richard Spencer’s Disastrous College Tour Mean The ‘Alt-Right’ Is Fizzling Out? 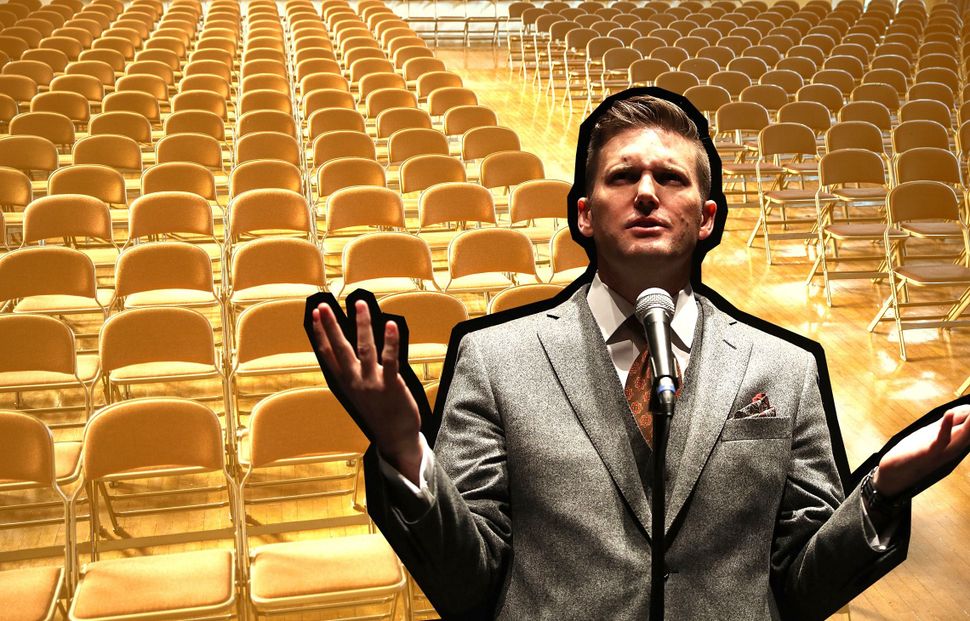 Less than a year ago, Richard Spencer led hundreds of angry white nationalists through the streets of Charlottesville, Virginia. This week, he spoke in a barn to only a few dozen people. And that was only after he tried to give away tickets outside a local Macy’s.

Spencer’s planned college speaking tour, which he hyped as a force multiplier for his message among the young men who are most receptive to it, has disappointed him. Its failure is a sign that Spencer might have hit a roadblock in his quest for more mainstream acceptance — just at a time when his allies in the white supremacist world are beginning to turn on him.

“The thing about white supremacism is that they kind of eat their own,” Lecia Brooks, outreach director of the Southern Poverty Law Center, told the Forward.

Spencer also has rivals in fellow racist agitators on campus. White supremacist propaganda has seen a dramatic increase on college campuses since the fall of 2016, according to the Anti-Defamation League. The group Identity Evropa is responsible for nearly half of all documented incidents, largely by placing, in the middle of the night, posters that promoted white nationalism.

Spencer’s talk Monday technically took place at Michigan State University, but it was in the Department of Animal Sciences’ livestock pavilion, more than a mile and a half from the school’s main campus. MSU allowed Spencer to speak only during spring break, when students were likelier to be away.

Spencer started fundraising for the tour at the end of 2016, around the time he threw a Nazi salute at a conference, raising a glass of Scotch and chanting: “Hail Trump! Hail our people! Hail victory!” The tour started in October 2017 at the University of Florida, and was called the Danger Zone Tour. The tour lived up to its billing, costing the school $600,000 for security and leading to the arrests of three Spencer supporters for allegedly firing guns at counterprotesters.

While Spencer was speaking at Florida, the nine other schools where he wanted to talk, including Louisiana State University, The Ohio State University, the University of Michigan and Kent State University, were watching and learning about the disruption he could cause. They sought to minimize it. Most denied his request to speak. MSU put him in the barn. Some allowed him to speak only during spring break. Others allowed him to book facilities, but only if he paid high security fees, or signed up for expensive insurance policies. Spencer sued three of the universities that refused him — the University of Cincinnati, Ohio State and Kent State — but he dropped the suits against the Ohio schools.

“I think this is clearly a turning point for the white nationalist ‘alt-right’’s ability to use the schools and to appear in public,” Spencer Sunshine, an associate fellow at the think tank Political Research Associates who studies far-right movements, told the Forward.

Now he’s got just one potential speech in the works, at the University of Michigan, but the event still isn’t scheduled. And Kyle Bristow, the lawyer who sued the universities to force them to let Spencer speak, announced over the weekend that he was done representing Spencer and was quitting political activism after a series of articles about his racist past appeared in the Detroit Free Press.

“For the public, his 15 minutes are over,” Sunshine said. “People aren’t coming out of interest [in his ideas]. The novelty factor has worn off for them.”

Indeed, Spencer’s profile may have peaked in August, when he led the Charlottesville marchers. After that, Brooks explained, the death of a woman protester and the blatant display of Nazi symbols caused most potential mainstream supporters to rethink their position on Spencer.

It also caused rifts within the movement. “There’s been a big blowup since Charlottesville,” Brooks said, explaining that many blamed Spencer for the violence that occurred. “This was a very unusual show of unity… and it’s been hell ever since.”

Sunshine explained that Spencer’s appeal within the movement came from “being a media figure who doesn’t look like a Nazi or a Klansman.” But he has lately angered some in his movement by growing closer to leaders of the Traditionalist Worker Party, which explicitly models itself after the Nazi movement. Members of the TWP were at Michigan State trying to provide a form of security for Spencer’s supporters.

Spencer touched on the downside of his infamy in his speech Monday.

The Charlottesville rally had been “a bit of a disaster,” he said, stating that the “blowback against us was tremendous.” Spencer and other white nationalists had been banned from using most internet-based payment systems and fundraising platforms. “I have a very hard time raising money online,” Spencer said.

“There’s a recognition on his part that… people are going to want to shut him down with acts of violence, and it would not be shocking to me if part of his calculus is, if those folks behave worse than he does, then they’ll get worse press and he’ll get better press,” Kenneth S. Stern, executive director of the Justus and Karin Rosenberg Foundation, which studies hatred and anti-Semitism, told the Forward.

That’s exactly what happened in Michigan. Despite the school’s efforts to maintain calm, clashes broke out between hundreds of anti-fascist protesters and white supremacist counterprotesters, and they included someone throwing what multiple witnesses described as horse feces. Police arrested 25 people, including the operations director for Spencer’s think tank, the National Policy Institute. Charges for the arrestees included carrying a concealed weapon, resisting police and obstructing officers, The Detroit News reported.

Ultimately, the experts said, Spencer’s ideas will still find an audience for some, even if university policies prevent people from hearing him speak in person. But Spencer’s role as the most visible white supremacist spokesperson is no longer so ensured.

White supremacists continue to support Spencer “because he’s effective at getting media attention,” Sunshine explained. “But there’s a reluctant acceptance of him. I think a lot of people don’t like him. He’s not such a uniter.”

It’s unclear whether Spencer will continue his campus crusade. He has a new legal advocate, James Kolenich, but the two said Monday that they haven’t even met. Spencer’s tweets that appeared after the Michigan State talk did not indicate future plans, and the events tab on the NPI website don’t list any upcoming activities.

But Spencer and his allies announced a new umbrella group a few months ago, called Operation Homeland. Their first major public campaigns took place before the Policy Conference of the American Israel Public Affairs Committee, in Washington, which they criticized in two different local actions.

In the first, mimicking Identity Evropa, flyers criticizing Israel were distributed and posted at American University.

For the second, the erstwhile scariest man in America hung on a highway overpass a banner that read “AIPAC Is Gay.”

Does Richard Spencer’s Disastrous College Tour Mean The ‘Alt-Right’ Is Fizzling Out?