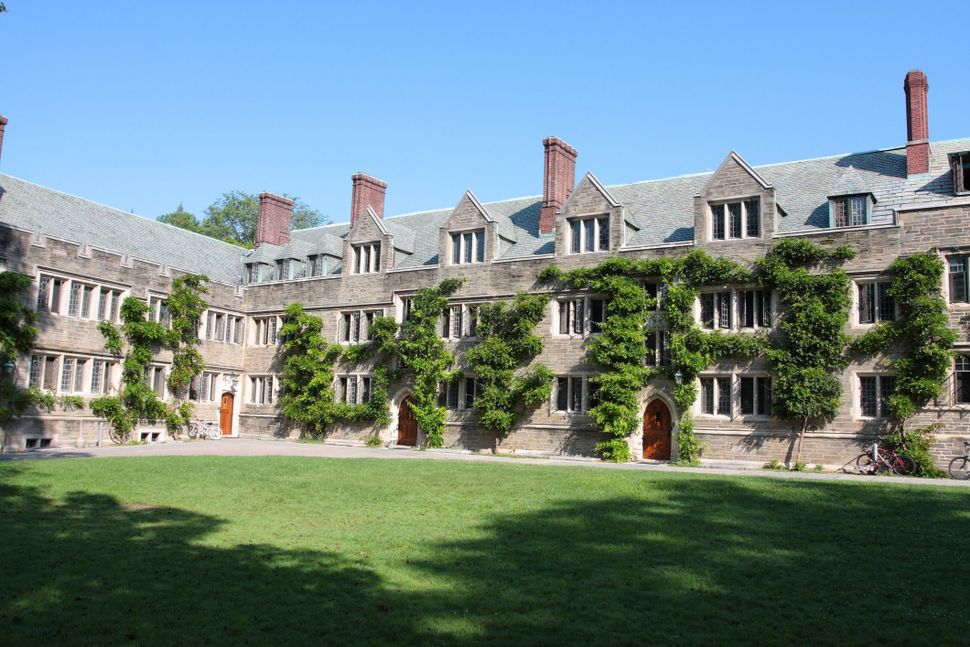 Rafi Lehmann attends Shabbat services every single week at Princeton University’s Center for Jewish Life, the elite university’s affiliate of the Jewish student organization Hillel. But this Friday, he won’t be eating challah in the dining hall – he’ll be protesting outside it.

That’s because Lehmann and the club he helps lead, the Alliance of Jewish Progressives, are calling for a boycott of the CJL’s dinner. Why? They say the upcoming “Israel Shabbat” themed dinner, organized by the club Tigers for Israel, is not inclusive of Jewish students like them who oppose Israeli policies.

His group’s petition encouraging Jewish and non-Jewish students to boycott the Shabbat dinner because it “fails to reckon with the nuances of the Israeli-Palestinian conflict [and] is deeply hurtful and exclusionary” has been signed by more than 100 students in the 24 hours since it was first published. Around 5,400 undergraduate students attend Princeton, including 500 Jews, according to the Forward College Guide.

Shabbat at CJL “is a beautiful coming together every Friday, it’s a sacred space,” Lehmann, a junior, told the Forward. “And we see Tigers for Israel coopting that space, and CJL allowing it, as a violation of the sacredness of that space.”

But that’s not how the CJL sees it. “We appreciate and respect that members of our community have a wide range of opinions regarding the Israeli government’s policies or actions in regards to the Israeli-Palestinian conflict,” executive director Rabbi Julie Roth emailed the Forward. “The CJL is not taking a communal stance on these policies in its decision to host Israel Shabbat, and we encourage everyone to attend Israel Shabbat and to engage in respectful dialogue with their peers about Israel.”

(Tigers for Israel president Noa Zarur asked for questions to be referred to the CJL.)

Lehmann says the Alliance of Jewish Progressives have about 15 active members – they have a weekly text study program, and partner with left-wing Jewish organizations like Bend the Arc and IfNotNow. Like IfNotNow, the alliance doesn’t have an official stance on the boycott, divestment and sanctions movement against Israel, or whether there should be a one- or two-state solution to the Israeli-Palestinian conflict.

Roth said they often get 200-300 people for Shabbat dinner, many of them themed events, including Pride Shabbat, Greek Shabbat and Soul Food Shabbat. And she stressed that they host Israel-related programs from a variety of political perspectives, including partnering with left-leaning clubs like J Street U and even the Alliance of Jewish Progressives themselves.

The issue with “Israel Shabbat,” Lehmann said, is that making the entire dinner a celebration of Israel, organized by a proudly pro-Israel group, alienates Jews with opposing views and makes them reticent to enter the campus’s hub of Jewish life.

Representatives did have conversations about possible compromises. The CJL’s proposals, including adding discussion groups to the dinner or allowing the progressive club to hold a separate event in the building at the same time, were turned down. “I realize that a lot of Hillels around the country wouldn’t be so accommodating” in offering that space, Lehman said. “But the issue is that ultimately, we don’t see ourselves as an ‘alternative’ voice.”

The alliance’s counter-offer was having Israel Shabbat in the second-biggest event area and a “neutral” dinner in the main dining room. “We said, if you don’t accept this option, we’re going to have to protest the event,” Lehmann recounted. It wasn’t accepted, and so protest they will.

The AJP is still figuring out what their counter-program, called Not Our Shabbat, will actually look like. Lehmann said he’ll likely protest outside the Hillel building and try to educate entering attendees about the parts of Israeli policies they’re not likely to discuss at the dinner. But he made clear that he would not be protesting during the religious services before the meal – in fact, he might still attend them himself.

Several Israel-related disagreements have cropped up at Princeton in the past few years.

A prestigious “eating club” next-door to Hillel became embroiled in months-long debate over a proposal to hang a banner reading “Human Rights for Palestine.”

And a scheduled November 2017 appearance at CJL by Israeli Deputy Foreign Minister Tzipi Hotovely was cancelled after progressive Jewish students complained that Hotovely’s history of anti-Arab invective violated Hillel’s standards for Israel-related events – which, ironically, were largely crafted to keep out BDS supporters, not Israeli politicians.

Lehmann said he wasn’t opposed to CJL, just this particular event. “We’re totally in support of a great Israel Shabbat, a great Israeli-Palestinian Shabbat,” he said. “We’re starting to make plans for next year that will address many of these questions.”