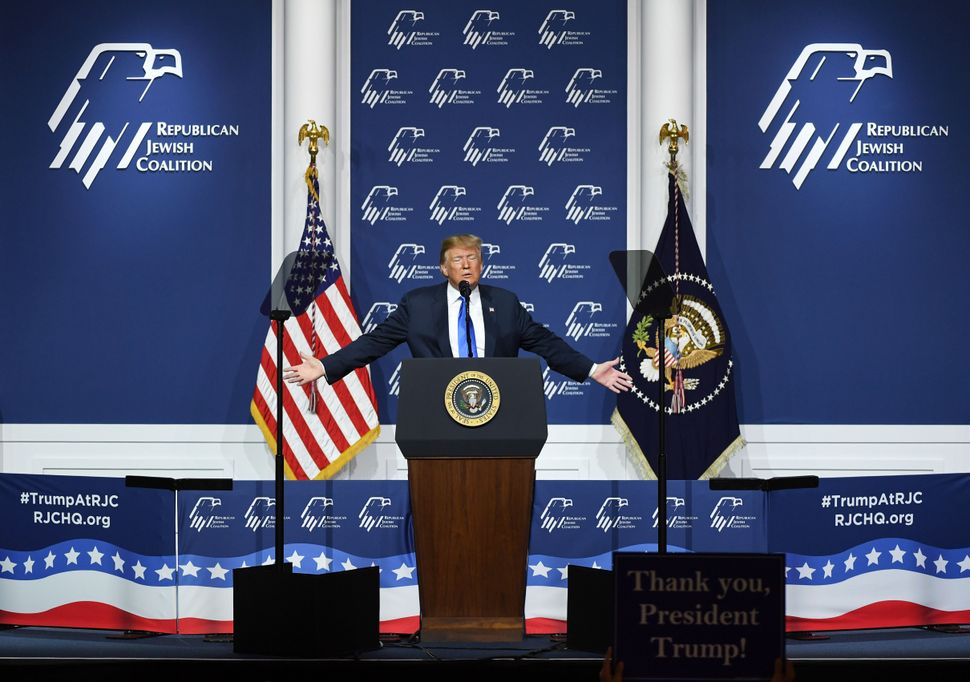 In a storyline that, like El Niño, sweeps around pretty reliably every four years or so, Republicans are planning a new gambit to win Jewish votes in the lead-up to the presidential race.

This year, they say, it’s different.

In the midst of the hubbub, the RJC announced plans to bring themselves closer to the center of the Jewish world, as well.

As POLITICO first reported on Sunday, the organization announced it will spend $10 million to boost Jewish support for Trump.

That comes after weeks of confusion around an unknown right-wing Jewish group calling itself Jexodus, and then The Exodus Movement, that Trump promoted repeatedly on his Twitter feed, which said it would lead young Jews away from the Democratic Party.

The claims are, on the one hand, a rehash of similar claims made every presidential cycle by Republican Jewish leaders. Republicans haven’t won more than 30% of the Jewish vote since 1984, and today only 26% of Jews say they approve of Trump, according to Gallup.

Yet this time, Republican Jews say, they’ve got a real shot. Praising Trump for moving the U.S. embassy to Jerusalem, and pointing to divisions in the Democratic party over Israel, the RJC says they have an opportunity to make the case to Jewish voters.

“It’s pretty good ammunition to use, and we’re trying to get the word out,” said Fred Zeidman, a member of the RJC’s board of directors.

Political observers aren’t so sure. “In this country, opinion on Trump moves a very small amount,” said Raphael Sonenshein, executive director of the Pat Brown Institute for Public Affairs at Cal State LA. “It’s hard to know why a large bloc of people would switch parties to vote for him for reelection.”

The numbers show that the Republican Jews have a tough road ahead of them. Democrats are coming off a particularly strong sequence of recent presidential race performances among Jews: 71% in 2016, 69% in 2012, 78% in 2008. The RJC has been battling that trend for years. In 2012, the organization said it spent $6.5 million on a campaign that featured Jewish voters who said they had “buyers’ remorse” after voting for Obama in 2008.

The RJC now says it will outspend that campaign this year. “The Jewish vote will remain a largely loyal Democratic vote because of domestic issues largely, but if there was ever a cycle where Republicans could make inroads, it is this cycle,” Ari Fleischer, the onetime George W. Bush press secretary who is now on the RJC board, told POLITICO.

Neither Fleischer nor the RJC’s executive director, Matt Brooks, responded to a request for comment from the Forward.

“We spend a lot of money every year trying to bring out [the] Jewish vote for Republican candidates,” Zeidman said. “We think we have a fascinating opportunity right now, number one because of what Donald Trump did for Israel, which has just been unprecedented.”

At the RJC meeting, Trump himself boasted about how pleasing his policies towards Israel had been for the Republican Jews in attendance. In a speech, the president said that, when he told U.S. Ambassador to Israel David Friedman that he planned to extend U.S. recognition to Israel’s claim to the occupied Golan Heights, Friedman “was like a wonderful, beautiful baby. He said, ‘Do you really — you would do that, sir?’ And I said ‘Yeah, I think I’m doing it right now!”

In a much-commented-on moment, Trump referred to Israeli Prime Minister Benjamin Netanyahu as “your prime minister,” a moment that drew condemnation from the Anti-Defamation League. But Zeidman said that, while he understood why the president’s phrasing was problematic, he took no offense. “To me, Israel is my country, too,” said Zeidman, who is not an Israeli citizen.

Meanwhile, the RJC poured attention on the contretemps around Rep. Ilhan Omar, the Democratic congresswoman from Minnesota, who has been at the center of a series of controversies about how she describes Israel’s influence in the U.S. political debate. Those controversies come as the Democratic party engages in an ongoing, grassroots struggle over its policy and attitude towards Israel.

“I imagine they’ll work very hard to elevate the Congresswoman who’s made comments that are seen as disparaging of Jews,” Sonenshein said. “That can, at the margins, have some impact.”

It’s not yet clear how the RJC plans to spend its $10 million. As in past years, it will likely include an ad blitz in swing states where Jewish voters can play a key role, such as Florida and Nevada. Sonenshein notes that, regardless of whether the RJC’s spending is successful in converting anti-Trump Jews, it could help make sure the quarter of American Jews who like Trump make it to the polls next November.

“That $10 million could be very effectively spent on mobilizing the 27% in the Jewish community,” Sonenshein said. “At the end of the day, when you have limited choices to make in your campaign, you often end up saying, how do we get our people out to vote. At the margins, that could make a difference.”