Measles Outbreak Spurs Some Orthodox To Vaccinate — But Hardliners Dig In 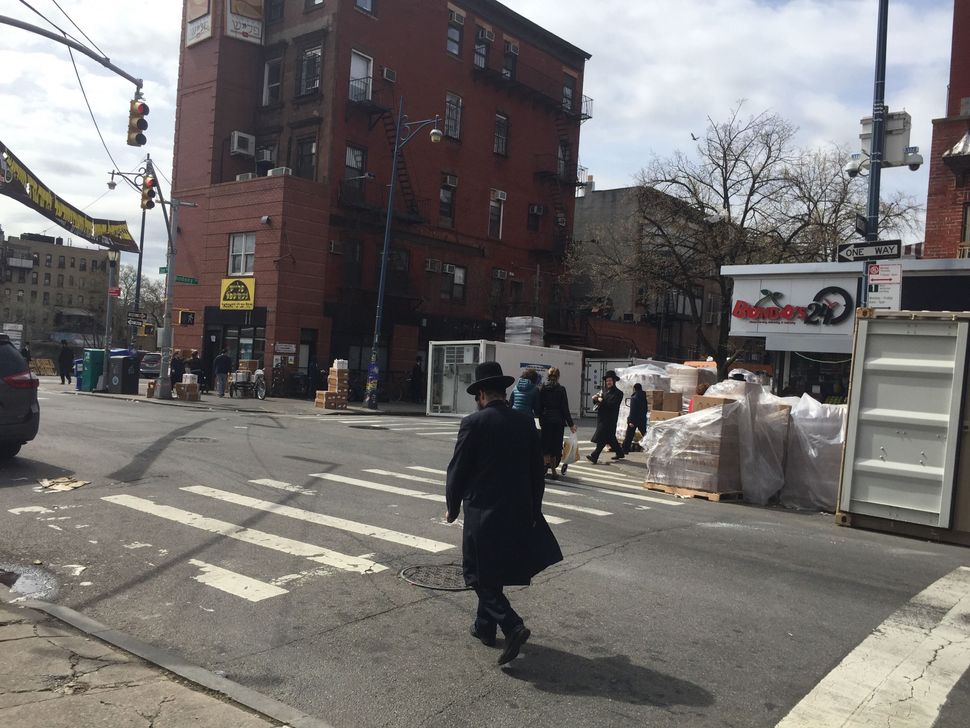 On Lee Avenue, in the heart of Williamsburg, the Hasidic parents and children hurrying in the hours before the Passover holiday are living in the midst of a historic measles outbreak.

Trips to the doctor’s office, where stricken children are being treated, have become truly dangerous for babies who haven’t yet reached the age at which the vaccine is administered.

A man who gave his name as Kohn, who was pushing his young son in a stroller, said that his youngest child had been exposed to measles twice in that way.

Seven months into an outbreak that has sickened more than 300 people in Brooklyn and Queens alone, locals and healthcare workers in the Hasidic community say that some parents who delayed vaccinations are now hurrying to inoculate their children. Hardcore vaccine skeptics, however, aren’t backing down.

Dr. Jay Begun, a pediatrician in Williamsburg, said on Wednesday afternoon that he had given two measles vaccinations in the half-hour since he had arrived at his clinic.

But Begun said that those who were bringing their children for belated vaccination were what he called “vaccine- hesitant;” people who had skipped vaccinations for various reasons, but were not ideologically committed to the cause.

Yet for the anti-vaccine hardliners, nothing seems to be getting through.

“You could stand on your head, they’re never going to give [the vaccine],” said Dr. Jay Begun, a pediatrician in Williamsburg, said.

The measles crisis has unsettled the Hasidic community in Williamsburg, where the city declared a health emergency earlier this month, and is pitting a hardline minority of vaccine skeptics against a community that, despite its fundamentalist religious beliefs, embraces modern medicine. Meanwhile, in the informal Yiddish-language media where anti-vaccine theories spread unseen by the secular world, anti-vaccine advocates are using the outside pressure to inflame their followers.

The virus can spread through the air, and can linger for hours in an enclosed space. Begun, founder of Kindercare Pediatrics, said that he will only see children with high fevers who are unvaccinated at the end of the day, when other children aren’t at the clinic, to avoid exposing them to a potential measles infection.

“We’re using extreme caution in terms of letting them into our office,” Begun said.

The outbreak and response has changed at least a few minds. A Hasidic woman who gave her name only as Jenny, stopped while pushing a stroller carrying her young son, said that an acquaintance of hers had vaccinated all of her children over the past week.

“Since this story happened, she asked around and then she decided to go ahead and vaccinate,” Jenny said. “And she had all her kids vaccinated. She has like seven, eight. She said she hasn’t done it in sixteen years.”

City health officials have put massive pressure on Hasidic vaccine skeptics, barring unvaccinated children from yeshivas, threatening to impose thousand-dollar fines on unvaccinated people who live in the affected area, and even shutting down one Hasidic day care center that would not provide immunization records for its students.

“They have tremendous pressure from their social circles, from all the professionals around them, from the school, from the congregation, from the membership, from the neighbors,” said one member of the Satmar community, who asked not to be named. But, he said, in most cases, “They wouldn’t budge.”

“Right now they are doing crazy things to get out of vaccination,” said one Williamsburg healthcare professional, who also asked not to be named. He said he knew of parents who had been told that their unvaccinated children would not be allowed to go to yeshiva, but who had sent them anyway, and then dodged school officials who tried to send the children home.

“These people not only have dug in their heels, they actually have a righteous zealousness,” he said.

In a Yiddish-language lecture posted April 10 on a call-in hotline called Koil Beri’im, Rabbi Hirsch Meisels, a prominent Hasidic diabetes advocate and an influential vaccine skeptic, suggested that the campaign against Hasidic vaccine skeptics was anti-Semitic.

After claiming that vaccines are dangerous and researchers are bribed, Miesels says that Jewish religious leaders must fight to maintain the conditional religious exemptions for vaccination currently allowed in New York State law, or they could lose other religious rights.

He said that non-Jews have also contracted measles, and compared the attention on cases in the Jewish community to the blood libel. And he said that if the government is allowed to encroach on religious rights on the matter of vaccination, it could lead to government restriction on issues like kosher slaughter and metzitzah b’peh, the controversial practice of applying oral suctioning to a baby’s circumcision wound.

Jenny, for her part, said that her young niece, who is less than a year old, came down with the measles days ago; her sister has taken her out of town to recuperate. “She’s nice that she didn’t expose everyone in Brooklyn, because she lives in an apartment building,” Jenny said.

Yet Hasidic parents are aware that some of their neighbors are still refusing to vaccinate. “They’re just waiting for the crisis to blow over,” said one man, accompanying his two daughters down Lee Avenue.

“They’re vaccinated,” he said, pointing to his girls, as they hurried ahead on matching pink scooters.

Measles Outbreak Spurs Some Orthodox To Vaccinate — But Hardliners Dig In