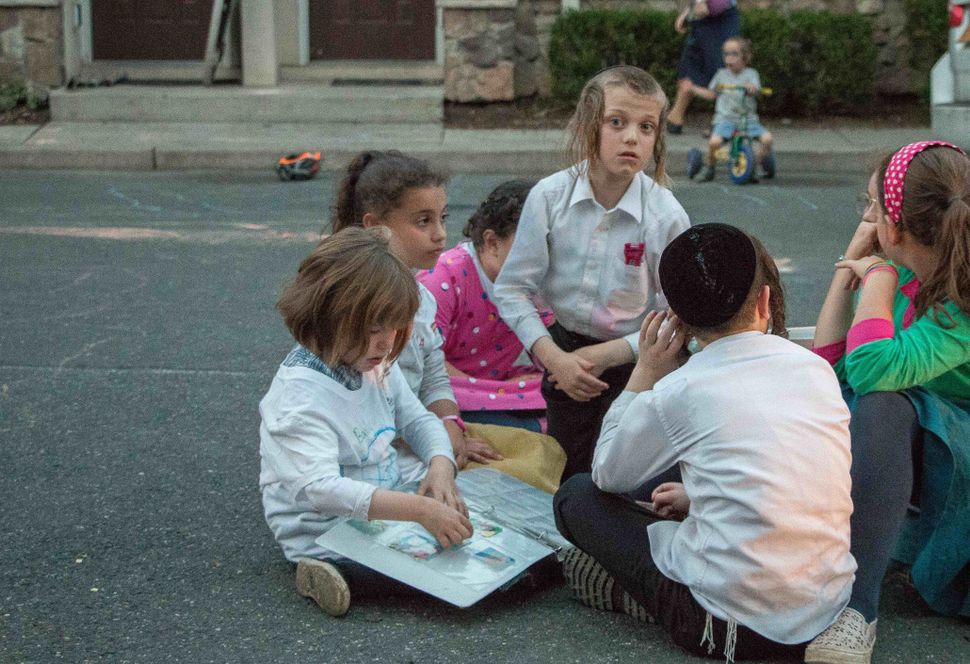 Esperanza, a domestic worker in a suburb of New York City, cleans the homes of four ultra-Orthodox families every week for $12 an hour. About a month ago, the mother of one of the families called Esperanza and told her not to come: All seven of her children, including her seven-month-old baby girl, had measles.

After two weeks, the mother told her that the infections had passed. Esperanza returned; only the baby still had a measles rash, she recalled.

But she still didn’t know the whole story: Esperanza, a legal immigrant who does not speak English, had no idea that there was a historic measles outbreak spreading among Hasidic Jews of Rockland County — a community that relies extensively on the local Latino population for house cleaning and other domestic work.

Rockland’s measles outbreak, which started in October and is largely limited to the area’s Hasidic community, shows no signs of abating at over 153 infections as of last week; the United States as a whole only reported 120 measles infections in 2017. on March 26, barring unvaccinated minors from public spaces for 30 days.

Yet for many in the county’s Latino community, that there was a measles outbreak at all was news to them. An epidemic among them is unlikely due to 90% vaccination rates in many of the immigrants’ native countries, but that one-in-10 person who isn’t vaccinated would likely get measles if exposed to it, and then bring the disease home, where the elderly and infants would be vulnerable.

“It’s scary, because … they didn’t say anything to us,” said Esperanza, who requested a pseudonym so as not to damage her employment opportunities. She added that she is vaccinated for measles.

Rockland County, just above the New Jersey state line on the west bank of the Hudson River, is mostly suburbs. Since the 1950s, it has been home to a rapidly growing Hasidic community, which now numbers about 60,000. Several villages in the area are completely Hasidic, including New Square, home to members of the Skverer group.

The outbreak is hitting communities that are receptive to misinformation about vaccines, with some even going so far as to defy their rabbis, insists — contrary to established medical consensus — that there is a connection between the measles vaccine and autism, Vox has reported.

Much of Rockland County is criss-crossed with suburban villages made up of winding Lanes, Courts and Drives. Where the outbreak is happening, however, Hasidic Jews live in close quarters in multi-family developments with enough bedrooms to accommodate their large families, which some sources say have eight children on average. Blocks of midcentury homes have been replaced with denser townhouses, synagogues and religious schools.

A large portion of the county’s Hasidic population has grown into and around Spring Valley, a village that is one of the most diverse areas in the county. Spring Valley’s population of nearly 33,000 is more than a third Hispanic, with a large number of Hatian immigrants, as well. A third of its population was born outside the U.S. Just next door are Monsey, Kaser and New Square, all heavily Hasidic towns.

“The business, the people who give us jobs, it’s the Jewish community,” said Luis Nivelo, a activist and a construction worker who lives in Spring Valley.

Nivelo said that few Latinos in Rockland County reported hearing anything from either their employers or public health authorities about the growing number of infections, which are mostly among children. He said that many people’s first time hearing about it was with the news over the state of emergency.

“We got a surprise when they were talking about how this is a real emergency in the past few months,” he said.

Nivelo, who frequently posts videos to his Facebook page about local issues, made a long video explaining in Spanish what the state of emergency was, and that measles is rarely contracted by people who have the vaccine. After he posted the video, Nivelo said that “a lot of people started calling me, a lot of people were nervous.” The video was viewed over 300 times in two days.

Part of the problem is that people in the Latino community were not familiar with measles or why it’s dangerous, and didn’t know the risks, Nivelo said.

Measles is a virus that often presents with symptoms such as a fever and, eventually, a rash, and in severe cases can cause pneumonia and swelling of the brain. Between one and two children out of every 1,000 that contract the disease will die from it, according to the Centers for Disease Control and Prevention. Having had measles also lowers your body’s immune response, making you more likely to contract other infections for up to two years after having the disease.

Contracting measles is highly unlikely if you’ve been immunized with the measles-mumps-rubella, or MMR, vaccine. But epidemiologists say that unvaccinated people have a nine in 10 chance of getting the disease if put in a room with an infected person.

Many recent immigrants to Spring Valley are from Central America, where most countries have measles vaccination rates that are lower than New York State’s rate of 92.5%, but only slightly. A measles outbreak at an immigration detention center in Arizona was found to have been spread by unvaccinated American staff members.

Nivelo, who was born in Ecuador but has been in Spring Valley for 25 years, had to call his mom to find out if he had been vaccinated as a child. He had.

Still, the potential exposure in Hasidic homes poses a risk to Latino domestic workers, some of whom live in multi-family homes or are in regular contact with infants, who do not receive the vaccine until 12 months, or elderly people who may never have received the vaccine.

“So far,” Lighter said, “it’s only really been the ultra-Orthodox community that’s been infected with this outbreak. And this is a possible way that it can go outside the community. If they are not immune, it will.”

The DOH declined to say whether any people in Rockland who have contracted measles have been Latino.

It’s not clear if Hasidic employers have been telling the Latinos who work in their homes about the outbreak. Nivelo said that some domestic workers told him they were concerned that it may not be legal to ask their employers if any of their family members has been infected. Two domestic workers in Hasidic homes in Rockland County who communicated with the Forward said that neither of them knew about the outbreak until the state of emergency.

Esperanza said that, even when she went back, her employer did not tell her whether the baby still had the disease — she could see that it still had a rash.

“I didn’t know whether it had gone away or not, because the Jewish woman hadn’t told me anything,” she said.

New York State’s Department of Health, which has undertaken an immunization campaign to stop the measles outbreak in Rockland, printed out flyers in Spanish, urging people to get vaccinated. But some of the flyers distributed by the department don’t mention the outbreak, and others simply say that “measles is being spread in our community” but don’t explain that the disease is largely confined as yet to Hasidic neighborhoods where so many Latinos work.

Community members and activists are concerned that there was not enough outreach to the Latino community about the outbreak.

“The Latino community is in those homes just as much as the Orthodox community is, they just don’t realize the risk there,” said Steven White, a local activist and health professional.

What’s more, Rockland County’s Latino community lives in something of of a Spanish-language news desert: There are no locally-based Spanish newsradio stations, and only New York stations of Telemundo and Univisión to watch. Most people get their news via Facebook, and Latinos who don’t speak English don’t watch the local news channels, according to Evelyn Bautista, the founder of Tender Steps of New York, a non-profit in Spring Valley that offers social services and ESL classes.

Last week, after Rockland County’s emergency declaration, national Spanish news networks aired segments on the outbreak. Esperanza said that those broadcasts were the first time she heard about the outbreak.

But even if the measles had been widely known, many women would have continued going to work, according to Bautista.

“Maybe they’ll take precautions, like wearing gloves or covering their mouths, but they’d still come into work,” she said. “Because it’s not like they’re gonna skip work.”

Esperanza is continuing to clean Hasidic homes, including the home that had the measles infections. She said she is still concerned about the disease spreading.

“It’s ugly, because if it catches up to us, we weren’t warned,” she said.