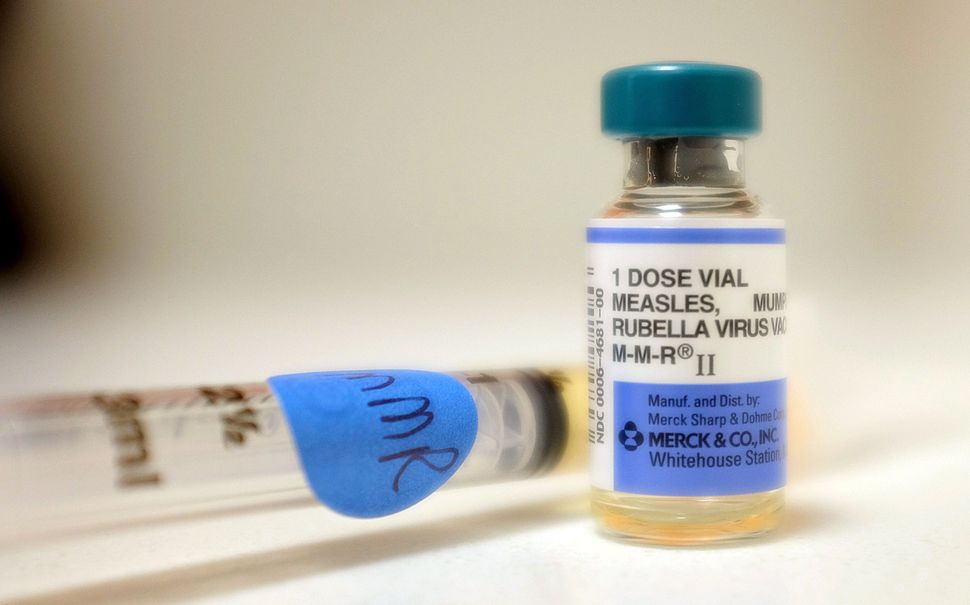 A vial of the MMR vaccine for measles, mumps and rubella. Image by Getty Images

A woman wearing a yellow star was seen at a rally Thursday opposing a state of emergency to fight the spread of measles in Rockland County, New York, Lohud.com reported.

The woman was part of a small protest in the Palisades Center mall in West Nyack, New York, only a few minutes’ drive from the Hasidic Jewish communities where measles has infected over 153 people since October, most of them children.

The woman, who identified herself as Stephanie Mahairas, had a yellow star that read “No Vax” affixied to her backpack.

“This is about religion, singling out the Jews,” Mahairas, who identified as a Christian, said. “This is about the state imposing itself on a person’s bodily integrity.”

“Who’s next? The Christians who don’t want to to partake in abortion?” Mahairas added.

A handful of people unhappy with Rockland County’s measles emergency order have gathered here at the Palisades Mall. Besides opposition to vaccines, they say there are civil rights issues @wcbs880 pic.twitter.com/LtMDkwR4JS

The yellow star, often in felt or another fabric, is a universal symbol of the Holocaust. Jews in Nazi-occupied Europe were forced to wear the star, which often read “Jude” — “Jew” in German — to identify them in ghettoes.

Other groups have appropriated the star as well. In 2018, one gun store sold yellow stars that read “Gun Owner.” The conservative social media provocateur Laura Loomer once wore a yellow star to protest being banned from Twitter. In 2017, a Miu Miu dress that featured an appliqued yellow star was the subject of criticism and confusion.