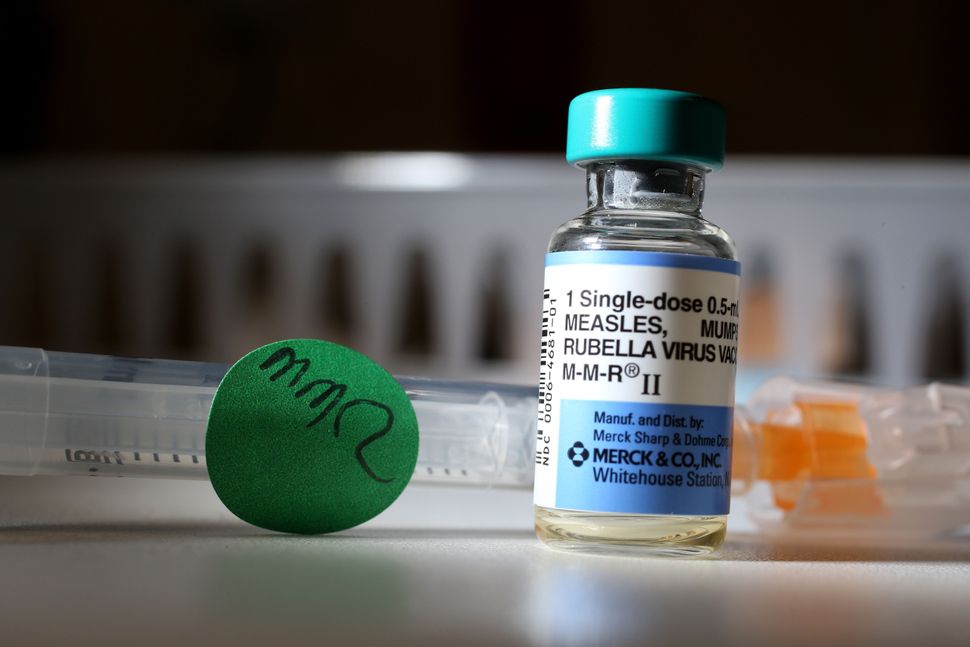 A dose of the MMR vaccine for measles, mumps and rubella. Image by Getty

Officials in Rockland County, New York, have declared a state of emergency to combat a growing measles outbreak begun in the area’s Hasidic Jewish community, The New York Times reported. The declaration will bar unvaccinated minors from being in public areas.

The county, a suburb of New York City, has had 153 cases of measles since October, with about a third of those coming in 2019. The state of emergency begins midnight Tuesday and extends for 30 days.

The outbreak began in the county’s Hasidic enclaves, located primarily in Monsey, New Square and Kaser. The outbreak began in the early fall, with public health officials tying it to an ongoing measles outbreak in Israel. Hasidic Jews often travel to Israel for the High Holidays. Some also make annual pilgrimages to Ukraine, to the grave of a legendary Hasidic rabbi; Ukraine has Europe’s worst ongoing measles outbreak.

Despite widespread support for vaccination in the ultra-Orthodox community from major rabbis and religious leaders, some ultra-Orthodox Jews still refuse to vaccinate their children, holding onto debunked myths about harm and chronic conditions caused by the vaccine. A few major ultra-Orthodox umbrella groups have resisted making official rulings on whether children must be vaccinated to attend yeshiva.

“I believe that there is no Torah source to tell me exactly how to take care of my children,” one Hasidic mother in Brooklyn told the Forward.