The Day The Forward Called The Cops On The Jewish Left 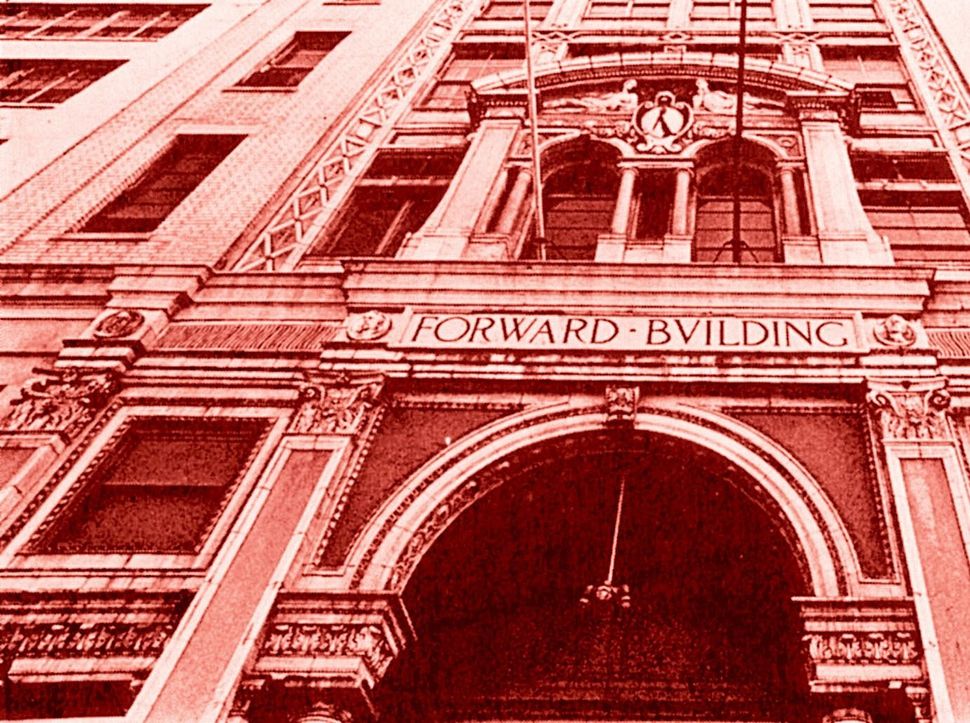 One midwinter afternoon in 1926, the socialists at the Jewish Daily Forward called the cops on the Jewish left.

Columns of angry workers marched on the Forward’s Lower East Side headquarters, carrying banners that read “Down With the Forward.”

The Forward knew they were coming, so the newspaper bosses called police headquarters for help. The police department sent dozens of cops, including the crack plainclothes officers of the Industrial Squad, who specialized in beating up leftists.

The police had been told not to use their clubs unless it was “absolutely necessary.” That didn’t last long.

In the park, the workers booed the police. Then came the charge.

From the distance of a century, it’s tempting to reduce the internecine conflicts among the Yiddish-speaking leftist Jews of the Lower East Side in the 1920s to kitschy clichés about two Jews and three opinions. But for the men and women who fought those wars, these were no cozy family fights. And the Forward, your grandmother’s friendly socialist rag, was a partisan.

The Forward was socialist, but also bitterly, violently, intensely anti-communist. It hated the Soviets, who hated it back. Trotsky said that paper was “always ready for the most perfidious betrayals,” and The Daily Worker, a communist paper, ran a cartoon caricature in 1926 of the Forward’s editor, Abraham Cahan, with an oversized rump. 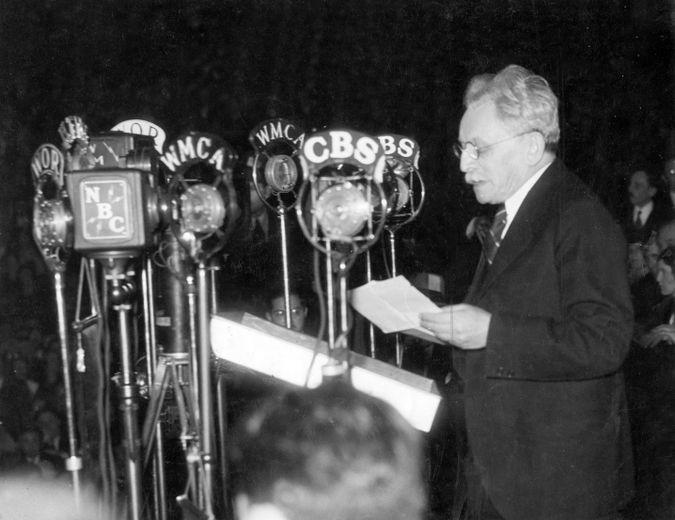 The second half of 1926 had been a trying time for the Jewish workers of the Lower East Side, as the Communists and Socialists fought for control of the locals of the International Ladies’ Garment Workers’ Union.

A strike the Communist-controlled cloak maker’s locals of the ILGWU had launched in July ran through the fall and into the winter, and appeared to be headed for failure. In mid-December, the international headquarters of the ILGWU, cheered on by the Socialists at the Forward, staged a coup and took control of the cloak makers locals from the local leaders.

The coup, ILGWU President Morris Sigman told The New York Times, would end the “bloody tragedy into which Communist adventurers and their followers have led thousands of prostrate cloakmakers.”

Within days, the international union’s agents had settled the outstanding disagreements with the cloak manufacturers. The local union leaders were furious. On December 15, humiliated and robbed of their power, the ousted Communists held a meeting at Webster Hall, where they denounced Sigman and his cronies.

Perhaps because it was so closely allied with the ILGWU leaders and had supported their coup, or perhaps because it epitomized the socialist establishment of the Lower East Side, the Forward came in for particular condemnation.

Invigorated from their rally, the Communists left Webster Hall to march on Sigman’s headquarters on 16th Street, where they were turned away by a squad of waiting police. Undeterred, the crowd headed downtown to Seward Park, across the street from the Forward building.

The size of the workers’ army that marched the 2 miles to East Broadway from 16th Street is a matter of dispute. The Daily Worker says there were 6,000 of them. The New York Times counted 2,000, while the New York Herald Tribune put the number at 1,000. The Forward, in its own coverage, said the marchers numbered just “several hundred.”

So, a group of marchers that sized somewhere between the capacity of a large lecture hall and the population of a small town arrived at Seward Park at 3 p.m., led by the guiding lights of the left-wing garment workers movement. “Famous” Fanny Warshawsky, a furrier, led a group of women protesters. Another leader was a furrier named Mendzsher, who the Forward claimed had earlier brought a group of Greek Communist toughs into the Forward building to bust heads.

The name of the marcher with the “Down With the Forward” banner went unrecorded.

On East Broadway, across from Seward Park, stood the hulking 10-story Forward building, which Trotsky had called a “palace” redolent with the “stale odor of sentimentally philistine socialism.” Somewhere high above the rock-hewn busts of Marx and Engels that stood over the arched entryway, Cahan, the mustachioed editor, must have been gazing down at the protesters, watching the Industrial Squad prepare to do their work.

In his editorial the next day, Cahan wrote the whole thing had been an immature stunt. “Before the Communists sent their crowd to the Forward building, one of their ranks, a reckless youth, yelled out to his pals: ‘Let’s get to smashing and bashing! Let there be blood; it’s a revolution!’”

Down below in the streets, the scene was getting tense. The crowd tried to rush the Forward building, but the massed police turned them back. The workers shouted “Cossacks” and “scab” at the police, perhaps the two worst slurs in their vocabulary.

The Forward bosses had told the police that the Communists wanted to break up their printing presses and beat up the editorial writers. That’s probably correct. After their first charge failed, the Communists massed, then charged again. The police held the line. Then things got bloody.

Press accounts differ on what precipitated the beatings. According to the Times, the police attacked after “women spat in the faces of the patrolmen, knocked their hats off and threw themselves to the ground, refusing to move.” The Herald Tribune said that after mounted officers rode into the crowd, a woman slapped a policeman in the face, “whereupon the police began swinging their clubs in all directions.” The Forward suggested that the melee started after “several Communist hooligans grabbed a baby carriage and tried using it as protection to break through the police line,” knocking the baby to the pavement in the process.

The Daily Worker doesn’t say why the police charged. But their description of the charge is vivid: First came the mounted police, trampling the crowd. Then the Industrial Squad ran in from the side streets, joined by thugs hired by the socialist union bosses. “Blackjacks were wielded as freely as nightsticks and revolver butts, felling many of the demonstrators,” the Daily Worker wrote.

The beatings went on for 15 minutes. The police chased the rioters through Seward Park and up Canal Street, before the crowd melted away into the Lower East Side. 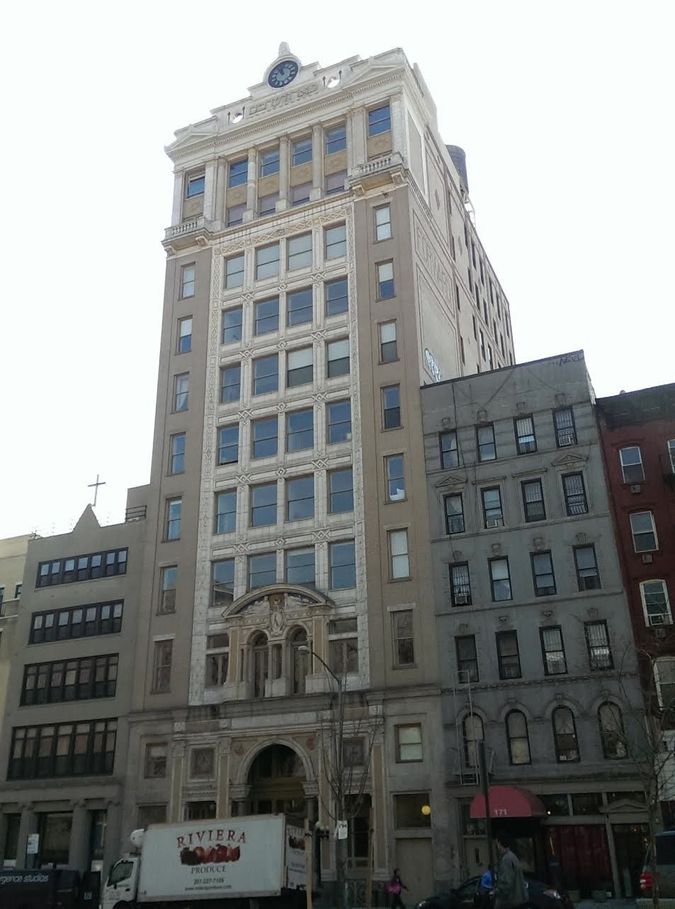 When it was all over, the damage on the Communist side was severe: More than 20 injuries, and five young women arrested, all of them in their mid-20s.

Cahan did his best to minimize the incident. He said that the rioters were paid agents, that the attack on his newspaper was an embarrassment for the Jews, and that it was all the more reason to purge the Communists from the garment union leadership. “This scene won’t last long in the Jewish labor movement,” he wrote. “Jewish workers never knew from pogrom threats…. The American world admired this, but over the past couple of years the Communists tainted it. These stains will be removed and the Jewish labor movement will once more have its magnificent character and heart returned.”

Sigman told the Herald Tribune that the protest had been the “last feeble effort on the part of these Communists and adventurers to make a show of strength.” In part, he was right. The Communists never regained control of the ILGWU locals, and Sigman, Cahan and their allies won.

In the long term, who knows. There’s barely a trace left of the ILGWU. The Forward’s palace is now a luxury condominium where one-bedroom apartments sell for $2.6 million. One wonders if the odor of “sentimentally philistine socialism” still lingers.

The Day The Forward Called The Cops On The Jewish Left