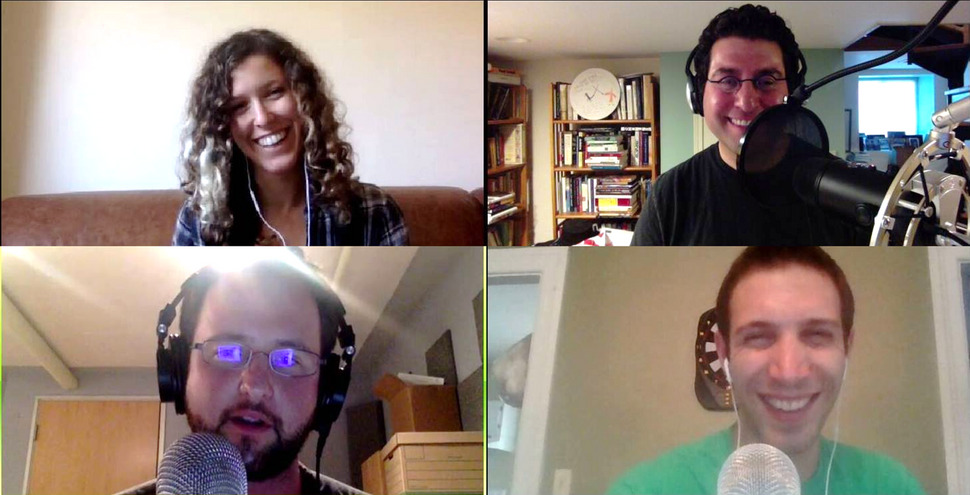 At the podcast party, guests trickled in slowly, but no one was really there. They ate only the food they brought, and no one exchanged either a hug or a handshake. The venue chosen by the hosts gave everyone pretty much the same view of the speakers.

Judaism Unbound, the more-or-less weekly podcast that examines trends in 21st century American Jewish life, reached 1 million downloads in April. To celebrate, co-hosts Dan Libenson and Lex Rofeberg invited listeners to join them on the video conferencing platform Zoom, and lined up speakers to share a bit of “Torah,” or teaching, with the group.

What ensued was an experiment in digital Jewish community. Listeners and speakers talked to the group and with one another in private chats. The event hardly cost Libenson and Rofeberg anything to host — they bought only a few Facebook advertisements to spread the word. Libenson jokes that they told guests to bring their own kosher-for-Passover snacks.

“We don’t know how to throw a party on the internet — nobody does,” Libenson says. “But one day everybody will know how to do it. In the meantime, the only thing to do is to try it out.”

That ethos of searching and innovation has driven Judaism Unbound for 231 episodes since 2016. Through interviews and in-depth conversations, the podcast has assembled a cross-section of the doers and thinkers who are at the frontiers of Jewish thought and practice. But Libenson and Rofeberg are also leaders in the growing digital Jewish space of Facebook groups, online meditation circles and prayer service streaming, and have come to embrace the possibility that their podcast will help expand the Jewish definition of community to include life online.

“We’ve now become ambassadors of the Jewish internet, in a sense,” Rofeberg said.

Judaism Unbound started as a means to a book. Libenson, 49, a law professor-turned-Jewish professional, wanted to write a book about what he saw as the coming Jewish future. He brought on Rofeberg, now 28 and a rabbinical student, as a research assistant, and the two eventually decided that the research could take the form of a podcast. In true digital-age fashion, the two did not meet in person until the podcast was well underway.

Over three years later, the podcast is an end in itself. Judaism Unbound’s episodes get about 40,000 to 50,000 downloads every month, making the show about the seventh most popular Jewish podcast on iTunes, behind Tablet’s “Unorthodox” and several text study podcasts.

Libenson and Rofeberg initially based Judaism Unbound on podcasts about the tech industry, like “Future Tense” and “This Week In Tech”: future-forward, centered on innovation. In that style, the podcast’s interviews give a wide access to the ambitious, messy and idealistic projects that are challenging the traditional structure of American Jewish life. Guests range from nationally known Jewish leaders — Benay Lappe, Amichai Lau-Lavie, Rick Jacobs, Lizzi Heydemann — to lesser-known intellectuals and innovators in Jewish thought and practice, like Noam Sienna, author of “A Rainbow Thread: An Anthology of Queer Jewish Texts From the First Century to 1969,” and Lori Schneide Shapiro, the founder of the Open Temple, a new Jewish community in Los Angeles. 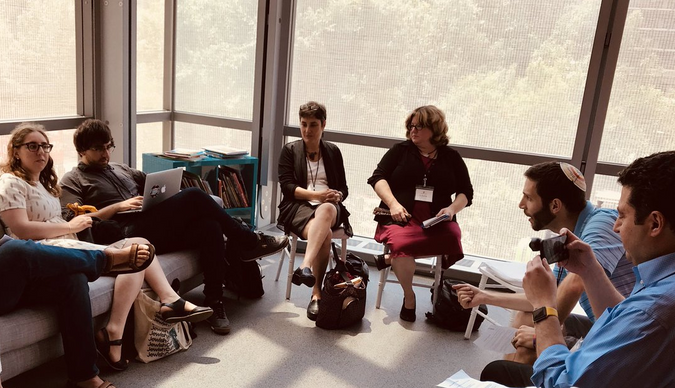 Rofeberg and Libenson (on right) leading a podcast workshop. Image by Courtesy of Judaism Unbound

The podcast also features conversations between Libenson and Rofeberg in which the pair approach the logical ends of their ideas about Jewish innovation, sometimes with weird, thought-provoking results. One discussion recently started with decluttering guru Marie Kondo’s idea that one should only keep belongings that “spark joy,” and applied it to Judaism. By the end, Rofeberg was half-jokingly suggesting that “Seinfeld” may end up being more genuinely integral to Judaism than certain Jewish holidays.

Libenson’s response? “My question is whether Judaism and the Jews are a completely overlapping Venn diagram, or ought to be.”

The podcast has found an audience with people who want to know how Judaism is evolving, in real time, and who may feel they lack language for how to talk about those changes, according to comments about the podcast included in a recent report on digital Jewish learning from the Jim Joseph Foundation.

“They really have their fingers on the pulse of what is contemporary in Jewish practice today,” said Harold S. Geller, who works in advertising technology and is a frequent listener on his morning commute. Geller, 59, defines himself as a “post-denominational liberal Jew,” and says that Judaism Unbound speaks to his desire to find meaning through a wide variety of Jewish experiences.

Both Libenson and Rofeberg share a dissatisfaction with the primacy of legacy Jewish institutions, and a commitment to creating new organizations that speak to a wider array of Jews. Libenson was the head of the University of Chicago’s Hillel before being dismissed in 2012 during a dispute with Chicago’s federation over the Hillel chapter’s independence. He subsequently started a separate venture, jU, to engage Jewish students on the campus by giving them support and resources to plan their own Jewish events and activities, which fizzled after four years. (Full disclosure: I was a jU fellow in 2013-2014.)

Rofeberg first reached out to Libenson during the Hillel troubles, when Rofeberg was the student representative to the international Hillel board while attending Brown University. He is now studying to become a Jewish Renewal rabbi (a process that happens largely online, through a low-residency program), and is a member of the Jewish activist group IfNotNow.

Since 2016, Libenson and Rofeberg have come to realize that not only are they striving to create a record of who is leading Judaism forward. They’re also trying to convince the Jewish world of the internet’s increasing relevance to Jewish life today. It’s not the sideshow to IRL (“in real life”) Jewish practice, they say: for many people, their whole Jewish universe happens online.

The internet could become “the central hub of Jewish life,” Libenson said.

That contrasts with how many Jewish organizations use the internet, Libenson says: as a supplement to in-person programming. Some Jewish digital-only ventures have found runaway success, like Sefaria, the text repository and study tool. But for Jewish communities, the gold standard for practice — and for bringing in fundraising dollars — is to have a physical location with physical events.

But the future, for many Jews, may be digital-first. Rofeberg, who, like Libenson, is a frequent panelist and guest speaker around the country, said he always tells people — especially in small Jewish communities — that there aren’t just a handful of Jewish communal organzations in their area: there are thousands, and they’re only a click away.

In a recent episode, the pair interviewed Rabbi Denise Handlarski, leader of a new digital Jewish community called SecularSynagogue.com. Rofeberg suggested that one advantage to digital Judaism is that people can look up terms and concepts they don’t know in real time, for example in group chats, or when watching a talk on Facebook Live.

“That is something that is better about digital Judaism,” he said. “And we have to be able to say, there are some things that are better [about digital Judaism] without that meaning to somebody, oh, I’m attacking geographically proximal interactions.”

Handlarski agreed, saying that she helps guide and educate people — doing what rabbis are supposed to do — SecularSynagogue.com as they discuss Jewish ideas, and not after the fact.

“As the leader in a digital space, I can better insure that everybody has the opportunity to come along,” she said.

That message resonates with many Judaism Unbound listeners.

“It used to be that, people would go to the synagogue for [guidance],” said Geller. “Now we’re living in a world of virtual community, and we find it where we find it.”

For Sandra Lawson, a Reconstructionist rabbi and associate chaplain for Jewish life at Elon University’s Hillel, Judaism Unbound (which featured her early on as a guest) exemplifies how some people are using technology and new media to push Judaism forward.

“They’re also not trying to throw out the baby with the bathwater,” she said. “There’s a traditional component to it, alongside them looking at the fact that we’re in the 21st century.”

But being digital is what helps Judaism Unbound exist. Their budget last year was about $150,000 — practically nothing for a Jewish not-for-profit. The overhead is mostly limited to podcast hosting fees and a Zoom subscription, and over 90% of their funding — much of which comes from the Palo Alto JCC and listener contributions — goes towards paying Libenson’s and Rofeberg’s salaries. The low costs keep Libenson and Rofeberg from having to confront the fact that the Jewish philanthropic world is not used to funding entirely digital operations.

“It’s still an open question as to the way to fund an organization that doesn’t exist locally in any physical way in any community,” Libenson said.

True to their tech-industry inspiration, they say that they still don’t know what Judaism Unbound could become: They could cease to be “only” a podcast, or “only” digital.

But, Libenson says, not all of their listeners are interested in the churn of what is new, the shape of Judaism to come. Most are just trying to learn how to feel like more engaged Jews in the present.

“Where the future comes in for most people is, if they feel that the future is going to be very different from the present or the past, it gives them a source of hope that turns out to be very significant,” Libenson said.