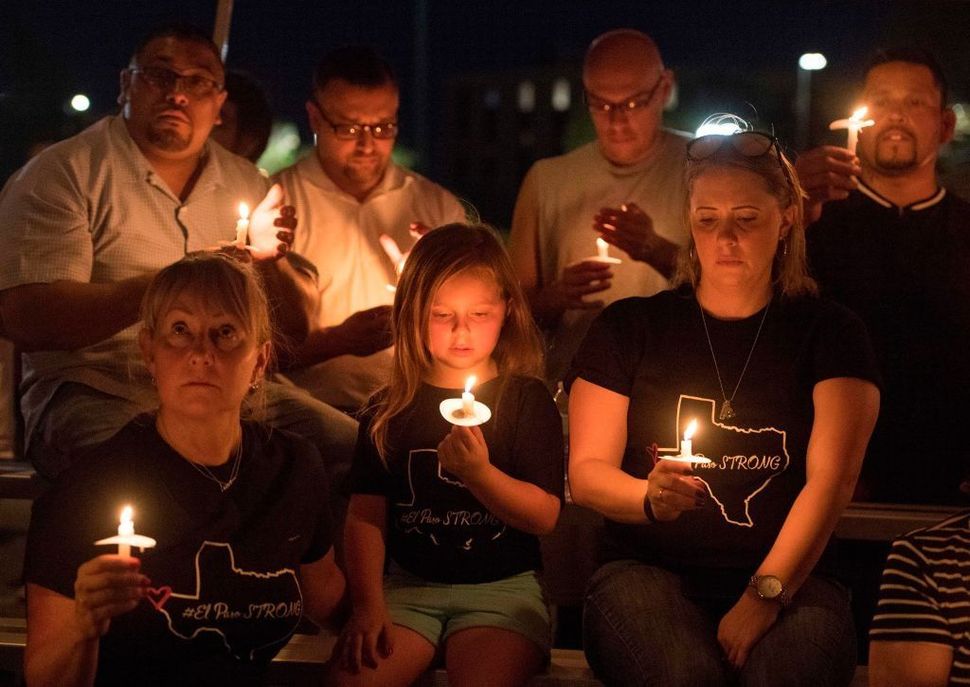 People pray during a candlelight vigil for victims of a white nationalist shooting that killed 22 people in El Paso, Texas. Image by MARK RALSTON/AFP/Getty Images

George Selim knows more about fighting domestic terrorism than almost anyone – and four days after a white nationalist gunman killed 22 people in an El Paso Walmart, he said the United States is doing it wrong.

These days, Selim is a senior vice president at the Anti-Defamation League in charge of their education and security programs. And before that, he started the office in the Department of Homeland Security that was supposed to fight “homegrown extremism,” like Islamic terrorism and white nationalism.

“We need a wholesale rethink,” he told the Forward on Wednesday during a phone interview. “It’s hard and it does take a long time, but I’ve seen it happen,” he said.

After the September 11, 2001 terror attacks, Selim said, the government totally transformed its anti-terror strategy — reconfiguring how different government agencies work together, and even creating the Department of Homeland Security itself. A similar revamp is needed now, he said.

The government should focus less on reacting to attacks and more on preventing them from occurring in the first place, he said. Social media companies should take more responsibility for hateful content on their platforms. And the public needs more mental health resources, more research on the factors that lead to these attacks, and more education on how to spot danger signs in individuals.

Selim held multiple positions in the Bush, Obama and Trump administrations before resigning in July 2017, citing the polarization in Washington. That was the year that Trump began cutting the budget for DHS’s anti-domestic terrorism programs – going so far as to revoke a $400,000 grant to an organization dedicated to de-radicalizing white nationalists.

Now, the administration’s October 2018 “National Strategy for Counterterrorism,” which Selim likely would have had a hand in crafting if he was still at DHS, is almost completely focused on Islamic terrorism. There’s only one sentence about domestic terrorism, and nothing specifically about white nationalism (though it does mention “animal rights extremism”). CNN reported Wednesday that Homeland Security officials had fought in vain to get the White House to focus more on white nationalism in the document.

Trump himself even said after the New Zealand mosque shooting in March that he didn’t think white nationalist violence was a rising threat. But after the Poway, California synagogue shooting the following month, and again this week, the administration appears to have come around.

Acting Homeland Security Secretary Kevin McAleenan recently created a task force similar to the one Selim led – but according to the Los Angeles Times, it only has a quarter of the staff and 12% of the budget. “We need to invest more, no question,” McAleenan told CBS on Tuesday.

Part of the problem is the lack of government jobs, Selim said, but it also falls on universities to offer more classes on these issues to train the next generation of staffers. He compared the current skills gap to the lack of Arabic speakers or terrorism experts who graduated college in the years before 9/11.

Many white nationalist terrorists were reportedly radicalized after being exposed to racist and violent propaganda on social media. Tech companies have said they are serious about stopping radicalization, but are also reluctant to ban content that isn’t explicitly illegal.

Selim said they have to go farther, and invest more resources in stopping misinformation and bigotry. “We can’t throw our hands up and say, ‘Because we have a First Amendment we can’t do anything about online incitement,’” he said. “Individuals are in fact being radicalized, groomed and recruited online every day.”

The ADL is calling on Congress to pass the Domestic Terrorism Prevention Act, a bill that would create domestic terrorism units within the FBI and other federal law-enforcement agencies, and provide resources on white nationalism to local police departments. The bill was introduced in March and has so far been co-sponsored by 39 members of Congress – all of them Democrats.

Congress is in recess, but Selim said an emergency session was necessary to begin taking action.

“We can’t wait months until the fall [when Congress returns]. We need urgent action now,” he said. “And God forbid another family grieves the loss of a child by some other horrific act of hatred while the administration and Congress stand by without taking any noticeable action.”