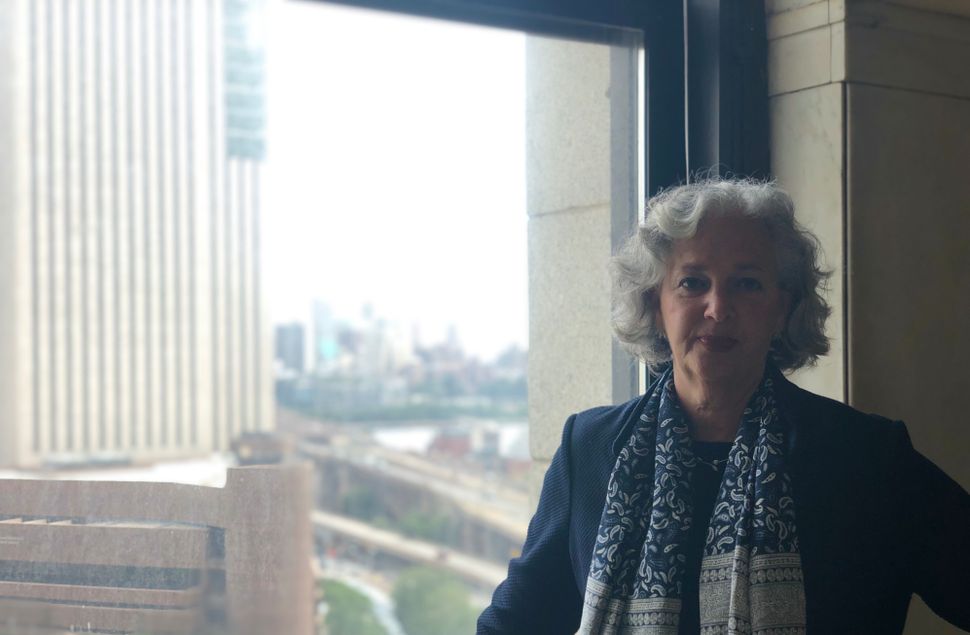 Deborah Lauter is the executive director of New York’s Office for the Prevention of Hate Crimes. Image by Molly Boigon

The leader of New York City’s Office for the Prevention of Hate Crimes said she faces “a huge challenge” in preventing offenses: the spread of hate online.

“We’re in a whole new atmosphere where hate travels instantaneously and can be a motivating factor,” said Deborah Lauter, the office’s new executive director.

For many American Jews, social media platforms have become cesspools of harassment and threats. According to a report released last year by the Anti-Defamation League, Jews see more internet hate during electoral contests and major political events.

Lauter, who was previously a senior vice president for the Anti-Defamation League, stressed that the ultimate focus of the office will be hate crimes on the ground. But, she said staff will work with academics, community organizations and others in the field to study the ties between hateful behavior online and actual hate crimes perpetrated in the city.

“Can you make the connection between what haters or potential haters are being inspired by and their actual violence?” she said.

Researchers have found that the internet accelerates the process of radicalization.

The role of online extremism has also come into focus in the wake of mass violence events perpetrated by individuals who sowed hate speech on social media, like the shooter in Christchurch, New Zealand.

Lauter said City Hall hasn’t decided on concrete steps to address radicalization online, but said part of the office’s strategy could involve educating children about how to identify hateful sources on the internet.

“A kid can get engaged in that without knowing,” she said. “Can you give kids skills to understand what’s wrong with that picture?”

Staff from Lauter’s office will partner with other agencies, including the NYPD and the Department of Education, to understand factors that contribute to hate crimes and direct resources to targeted communities.

Lauter will hire about five employees and manage a budget of $1.7 million for fiscal year 2020. During her tenure at the Anti-Defamation League, the organization pushed for passage of federal legislation that provides funding for communities to prosecute and investigate hate crimes.

The Office for the Prevention of Hate Crimes launched last week in the aftermath of a spate of violent attacks on Jews in Brooklyn this summer. At one point, there were three anti-Semitic assaults in one week.

There are about 1.1 million Jews living in the five boroughs.