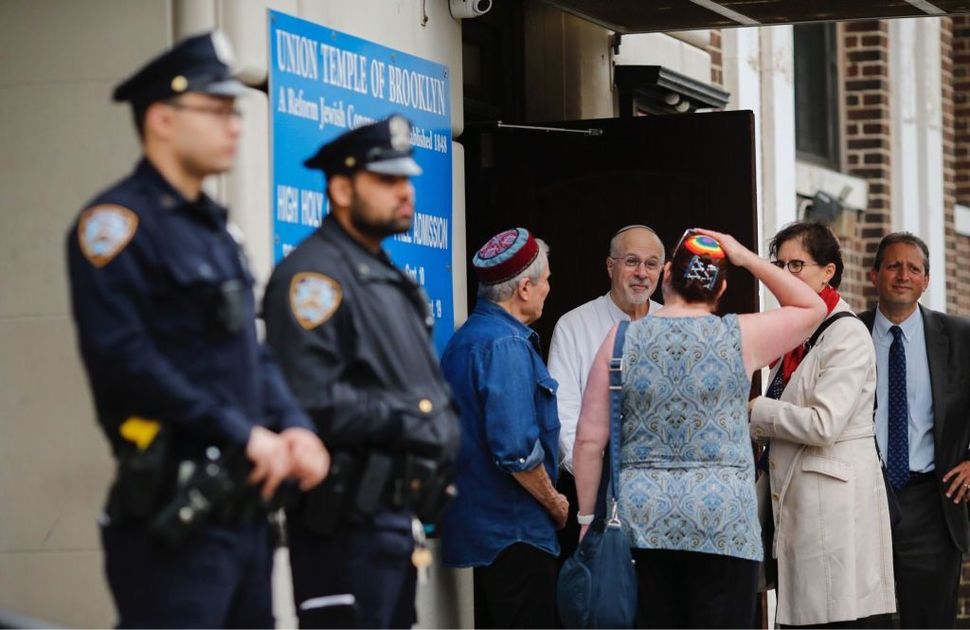 NYPD officers outside a Brooklyn synagogue. Image by Getty Images

In her recent op-ed, Avital Chizhik-Goldschmidt was right to express outrage over the escalation of anti-Semitism directed at Orthodox Jews. The examples of prejudice and discrimination she cites should disturb all New Yorkers who care about religious freedom and pluralistic democracy. The spate of anti-Jewish hate crimes over the past two years is extremely disturbing and warrants immediate action.

That is precisely why, earlier this year, the City Council passed, and Mayor de Blasio signed into law legislation establishing the Office for the Prevention of Hate Crimes (OPHC). In June, the Mayor called for the office to open before the end of summer, months ahead of schedule, and at the end of August I was honored to take over as Executive Director.

There is no short-term fix to ending the longest hatred. As someone who has devoted three decades of my professional career to fighting anti-Semitism and all forms of hatred, I know that it requires a multi-pronged approach that focuses on education, law enforcement, and community relations.

In my conversations with Mayor de Blasio, he has expressed his deep belief in and understanding of this approach. That’s why the OPHC has formed an interagency committee that includes the Mayor’s Community Affairs Unit, NYPD, City Commission on Human Rights, Department of Education, Department of Health and Mental Hygiene and others, to coordinate efforts and create opportunities for creative, holistic, long-term ways to address bias-motivated violence in every affected community. Importantly, we will work with community-based organizations to elevate best practices and explore new, proactive ways to combat hate.

Diversity and inclusiveness are foremost among NYC’s greatest strengths and defining values. The Orthodox Jewish community has always been a beautiful, integral part of the fabric of our city. That Jews now feel threatened is simply unacceptable. We must work together to break down stereotypes and to promote respect for differences. We must — we will — double down to stop this wave of hate and restore civility and safety.

We are paying attention.