Letter from Germany: We Do Not Want Your Apologies 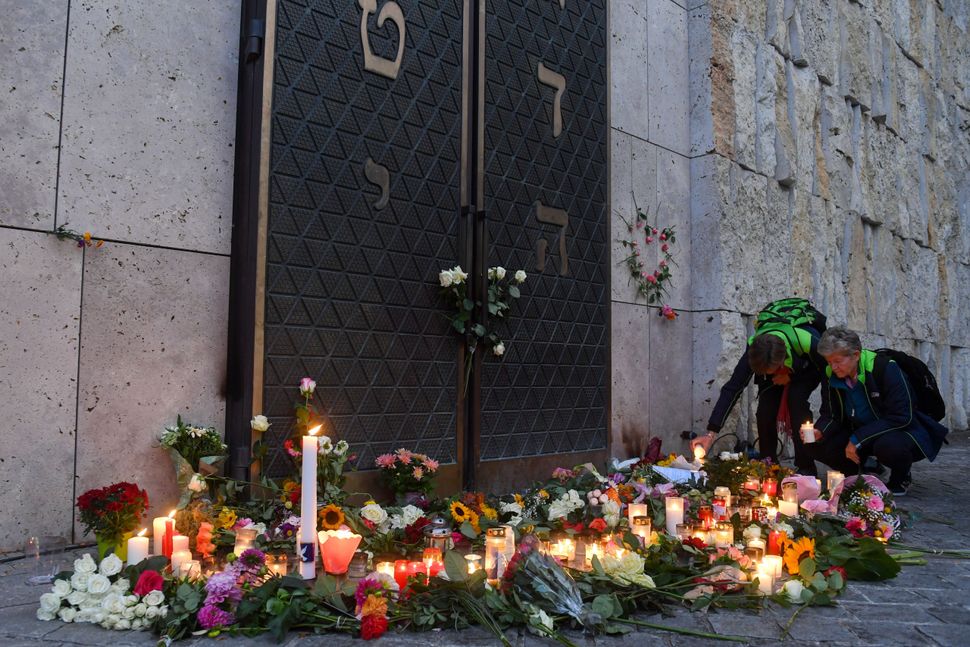 Well-wishers across Germany are apologizing for an attempted attack on a synagogue in the small city of Halle; the shooter killed two bystanders. Image by Getty Images

Once or twice a week, I walk with my 7-year-old son, sometimes with one of his friends, to a chess class.

There’s an easy road: via Rosenthaler Strasse in Berlin’s Mitte district, past Hackescher Markt, then a right to our destination. But we don’t like the big streets – there are too many people, and we can’t play our games.

So instead, we usually take Ackerstrasse, where I name a country and he has to say its capital city; then we go past Koppenplatz, where we play “Department of Funny Walking;” and just before we reach the Jewish high school, we take a right into the street with the yummy waffle stand. That’s where we do some “Simon Says.” Finally, we turn right again, walk by the fence, pass the police officers and the metal detector, and go inside New Synagogue for the chess lessons.

This is the same place where a 23-year-old refugee from Syria tried to commit an attack on October 4, wielding a knife in his hands as he climbed over the fence and approached the guards shouting slurs about Jews and Israel.

The man did not hurt anyone, and was released one day after the attack. Just four days later, 105 miles away, an anti-Semitic gunman stormed a synagogue in Halle during Yom Kippur prayers. His goal of killing as many Jews as possible was thwarted by a locked door, that shooter instead killed two passing by.

As the shooting in Halle happened, we were on the beach in Israel, where I grew up. But our vacation ends soon, and my family is supposed to back there soon. To Berlin, where we have lived for 12 years.here I own a restaurant that serves Israeli food. Where I walk my son to chess class.

This is what my son expects. My wife and I are talking about it in long, silent, looking-into-each other’s-eye conversations.

If we walk to chess class, which route will we follow? Maybe the busier streets are safer? Should we still talk in Hebrew? What and where are we supposed to look at, to check to see if we are safe, before and after leaving the synagogue?

I Never Answer the Door

I remember the hope that filled my suitcases when I moved to Berlin in 2007: The freedom, the space, the openness, the ability of people to observe and accept one another; the art scene, all these people from all these countries.

But lately, I find myself folding parts of my Israeli and Jewish identity back into my suitcase. I feel I must censor who I am when I leave the doors of our home.

When a package from Amazon comes, I never answer the door; we have a mezuzah on our door frame, and who knows what the delivery person might make of that. So I hear the buzz, and later take the note they left and pick up the package at the bodega across from our building. And then I fold another part of myself into the luggage.

I don’t buy the “sorrys.” I don’t go to the vigils, and I don’t join the kippah-wearing ceremonies. How many times can you say that you are sorry and let the same thing happen again? At some point, the word loses its meaning; at some point, the victims understand that it’s just the thing you do until the next news will take over.

I don’t want to talk about the far-right Alternative for Germany Party, or AfD, either. They don’t fool me. They, along with the extreme faction of radical Islam in Germany, are the ones who are responsible for the killers like the Halle shooter.

The Guy is Still There Every Saturday

Last year, I wrote about the Palestinian falafel vendor at the Saturday market in Berlin’s bourgeois Prenzlauer Berg neighborhood, who has been verbally attacking Israelis and other Jews with anti-Semitic slurs for years, every week.

After my article was published, I protested at the market for 10 weeks. Police stopped me twice and detained me once.

A German newspaper sent its writer to cover the protest. She depicted me as an aggressive man fighting against a Muslim, both of us bringing a conflict from the faraway Middle East to their poor host country, Germany.

But my real protest was with the Germans, who allowed this guy to shout offensive insults at me and other Jews like: “What a shame that Hitler didn’t finish his job.”

The guy is still there every Saturday, selling his falafel and cursing at Jews. But I am not there anymore. So take your candle vigils and kippah-wearing solidarity shows elsewhere.

This is How You Create That Fertile Ground

Are you sorry? Ashamed? Really?

Let’s see: The attacker in Halle said that he denies the Holocaust. What do you expect when German government leaders visit Iran and embrace leaders there that do the same?

The attacker said that Jews are the root of all evil. Well, can I remind you that three months ago, a leading German news magazine accused two little Jewish lobby groups in Berlin of determining Germany’s parliament policy in the Middle East. Can’t you connect the dots here?

The German ambassador to the United Nations has compared Israel to North Korea. A Lutheran bishop has said the country should reconsider its relationship with Israel. The foreign ministry has compared Jesus and Palestinian refugees. A daily newspaper celebrated Israel’s victory in the Eurovision song contest with an anti-Semitic caricature.

A couple of months ago, four Palestinian men were captured and killed after crossing the border from Gaza to Israel with a ton of arms and explosives. A German online news site’s headline? “Israeli army kills four Palestinians.”

This is how you make the ground fertile for attacks like the one in Halle. Those who are truly sorry don’t repeat their acts.

I am not contesting Germans and their right to their opinions; I am not angry as I am I writing these lines, I am realistic: How do we talk about the line between fair and justified critique of Israel and anti-Semitism? If there is no line, don’t look shocked when the next attacker strikes.

Germany’s commissioner for Jewish life and against anti-Semitism, Felix Klein, made a radical statement in a liberal democracy when he told the Jews of Germany to avoid wearing a kippah.

It’s radical because Klein picked up the carpet called “Jews in Germany” and revealed the truth. For years, we swept the situation of Jews in Germany under the carpet. It’s time for the government, the politicians, organizations, and all German individuals to pick up their own carpet.

We do not seek your apologies. We just hope not to hear them again in the near future.

Ze’ev Avrahami, a chef, owns Sababa Restaurant in Berlin, where he lives with his wife and two children. He writes regularly for the Israeli daily Yediot Aharonot. Follow him on Twitter @zeevny.

Letter from Germany: We Do Not Want Your Apologies