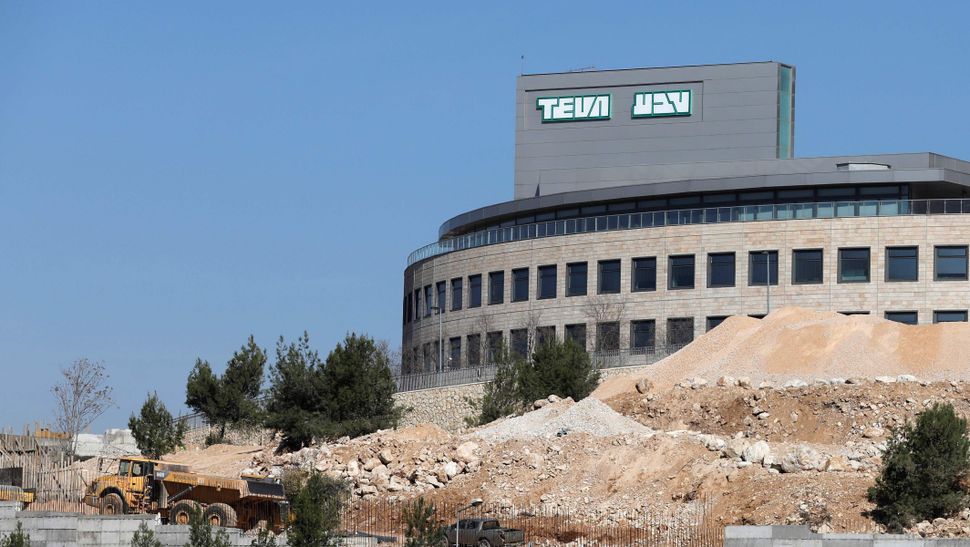 The chief executive of Teva Pharmaceutical Industries — Israel’s largest company — has been summoned to the U.S. to make a deal in the massive opioid litigation.

Teva is one of several pharmaceutical giants defending lawsuits over their involvement in the opioid epidemic, which has taken on global proportions and kills, on average, 130 Americans a day, according to data compiled by the Centers for Disease Control and Prevention.

About 2,600 suits in which it Teva a defendant are being overseen by a federal judge in Ohio. To settle its part of the litigation, Teva is offering to provide billions of dollars worth of free drugs, according to Bloomberg, including a generic version of the overdose-stopping spray naloxone, also known as Narcan.

In response, the judge essentially said: Come see me. He has already encouraged the group of five major companies involved in the suit to strike a deal that would “do something meaningful to abate this crisis.”

If the deal isn’t accepted, the trial covering the thousands of lawsuits is set to begin Monday, and if the pharma companies lose, they could be on the hook to collectively pay $8 billion in damages, Between this and a separate suit, analysts have told Haaretz that Teva could be expected to pay penalties as high as $4 billion.

Teva, whose history stretches back to a drug wholesaler founded in Jerusalem in 1901, is in trouble. The total value of its stock has tumbled dramatically from nearly $60 billion in 2015 to about $7.5 billion now. It has cut thousands of jobs in recent years, damaging its reputation as Israel’s economic golden child. The company is only offering the free drugs because it is too saddled with debt to pay a cash settlement, sources told Bloomberg.

So how did Teva get here? 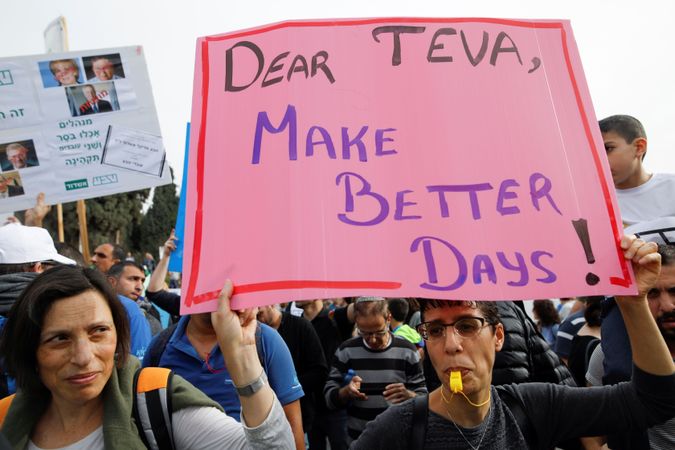 Israeli employees of Teva, the world’s biggest manufacturer of generic drugs, hold placards on December 19, 2017, outside the prime minister’s office in Jerusalem during a demonstration against plans by the pharmaceutical giant to shed over 1,7000 jobs. Image by Getty

The company is considered the world’s largest producer of generic drugs. In 2011, it acquired an American drug producer, Cephalon, that manufactured opioids and other drugs. A few years earlier, Cephalon had paid a $425 million fine for misleadingly promoting one of its opioid drugs, as well as two other drugs, according to one of the complaints in the opioid mega-suit. After buying the drug producer, Teva handled all marketing of Cephalon’s drugs, the complaint says.

As the opioid epidemic became a national crisis in the United States, numerous states and local municipalities began suing Teva, as well as American companies like Purdue Pharma and Johnson & Johnson, for their roles in producing large quantities of opioids and marketing them widely. In the current litigation Teva is hoping to settle, some plaintiffs charged them under racketeering laws usually applied to organized crime.

Teva officials have repeatedly declined to comment for articles about the opioid litigation.

A suit brought by the state of Oklahoma was the first to go to trial, earlier this year. The state alleged that Teva had conspired with other major drug procuers to deceptively market opioids in the U.S. Teva settled the Oklahoma suit for $85 million.

The company also faces criticism outside its involvement in the opioid epidemic. In July, Teva discontinued production of a vital drug for treating cancer in children. That has contributed to widespread shortages in the U.S. of the drug, vincristine, which doctors say does not have a substitute.

Teva has not offered any comment on the decision to end production of vincristine, and the U.S. Food and Drug Administration’s website notes only that Teva “made a business decision to discontinue the product.”

Some “impact investors,” who use their shares of public companies to lobby the companies’ leadership to meet certain goals, have tried to push Teva towards more accountability. One such firm is JLens, a consultancy that lobbies on behalf of Jewish organizations holding various stocks. After meeting with representatives from JLens and other institutional investors earlier this year, Teva said it would create an independent report about the company’s activities as they relate to opioid production.

Such a report would still not erase Teva’s troubles in the short term. Its chief executive is set to meet with the judge overseeing the opioid litigation, alongside other CEOs, attorneys general and lawyers for the plaintiffs at the federal courthouse in Cleveland. Teva has said it would give out $15 billion in drugs over 10 years, Bloomberg reported.

The announcement of the deal led Teva’s stock to jump Thursday, but analysts are skeptical that the bump is anything more than just that.

“We think it’s hard to call this a positive or negative with not yet knowing the details,” one analyst wrote, according to Barron’s.