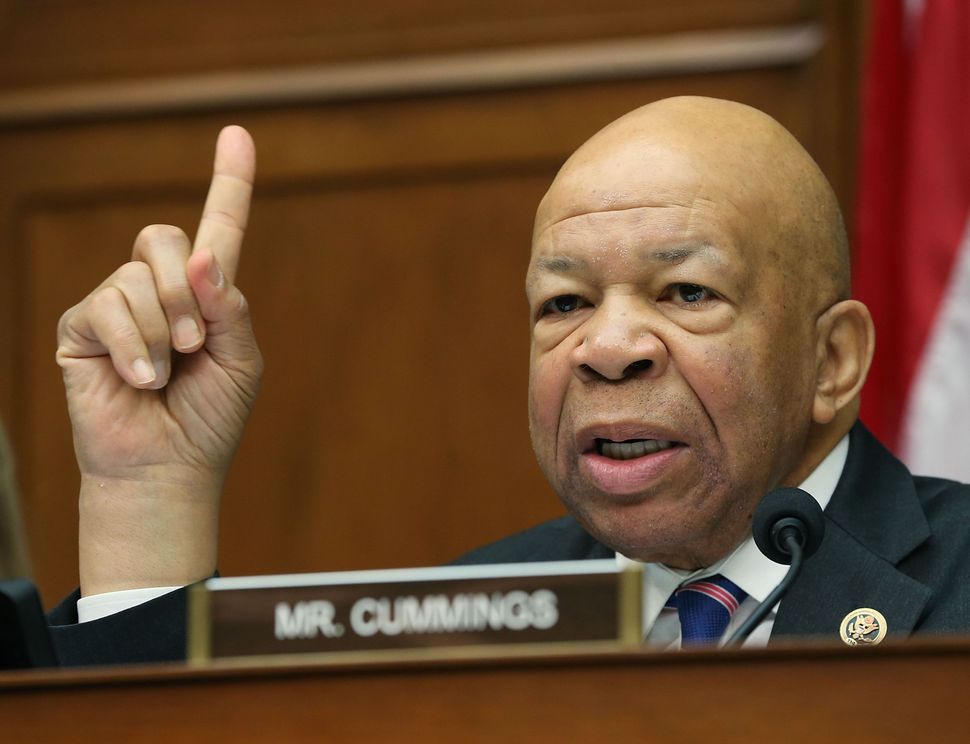 As I thought about Rep. Elijah Cummings in the hours after his death Thursday morning, my mind kept going to images of the students applying to join his namesake initiative, the Elijah Cummings Youth Program in Israel.

Each spring, about 25 high school sophomores from the Congressman’s district are selected to interview for slots in the two-year leadership program. These 14- and 15-year-old nervous kids walk individually into a room to face the full 20-member program board, a group evenly divided from the Jewish and African-American communities.

Seated at the head of the table was always Congressman Cummings. He always participated in the two days of interviews, and – with his booming voice – he always asked the first question in every interview. Talk about an intimidating introduction to the program!

But for the dozen or so students selected to participate each year, the Elijah Cummings Youth Program offers nearly limitless opportunities, thanks in large part to the dedication and commitment of the congressman.

More than 20 years ago, Congressman Cummings joined with leaders of Baltimore’s Jewish and African-American communities and the Baltimore Jewish Council (the independent Jewish Community Relations Council of The Associated: Jewish Federation of Baltimore) to launch an initiative to build deeper and stronger relationships between those two communities. They decided to focus on youth, recognizing that was a way to create lasting change.

Students who are selected – mostly African-American – spend two years focused on leadership training, public service and a summer trip to Israel between their junior and senior years. They learn about politics and government service in the capitals of both our state and our nation. Upon their return from Israel, they talk to different communities about their experiences traveling around the Jewish state and staying at the Yemin Orde Youth Village. In recent years, the program fellows have also partnered with teens from the Jewish community to jointly explore the shared histories of Baltimore’s African-American and Jewish communities, with an eye toward social justice initiatives for youth.

Congressman Cummings has served as honorary co-chair of the program, but he was far more involved that that title would suggest. He personally called each selected student to welcome him or her to the program. He joined them for programming and retreats, wrote recommendation letters, delighted in hearing them announce their college selections (especially if they had chosen his alma mater, Howard University), and stayed in touch for years. If he received a fee for a speaking engagement, he donated it to the program.

When CNN Saturday morning anchor Victor Blackwell delivered a powerful response to one of President Trump’s tweets attacking Congressman Cummings and Baltimore, those of us familiar with ECYP knew part of the reason for Victor’s emotion. He is a graduate of the first ECYP class and has been an active alumnus for the past two decades. That is just one example of the impact that Congressman Cummings had on the lives of so many.

During his many community speeches, Congressman Cummings frequently told the story of the Jewish pharmacist who gave him his first job as a teenager and encouraged him to think ambitiously about his future. (That pharmacist’s grandson is now on the ECYP board.) Those early experiences, the congressman would say, helped shape how much he came to appreciate the importance of different communities working together, to build trust and understanding.

When Congressman Cummings spoke, he would regularly remind us that “our children are the living messages we send to a future we will never see.” I came to appreciate that his work consistently reflected that belief.

In my 3 1/2 years as executive director of the Baltimore Jewish Council, one of my greatest sources of pride has been the opportunity to work so closely with Congressman Cummings on the Elijah Cummings Youth Program in Israel. All of us here at the BJC vow to carry on both the program and the congressman’s legacy of promoting better relations between our Jewish and African-American communities.

Our community, our city, and our nation lost a friend, a man of faith, and a remarkable leader Thursday morning. He was a champion of the city he loved and all of our community’s needs, priorities, and values, with a constant focus on creating opportunities for young people. May his memory be for a blessing.

Howard Libit is executive director of the Baltimore Jewish Council. The Elijah Cummings Youth Program in Israel is an independent non-profit that operates out of the offices of the BJC. Howard can be reached at hlibit@baltjc.org.