Orthodox Female EMTs Hit Setback In Fight For Their Own Ambulance 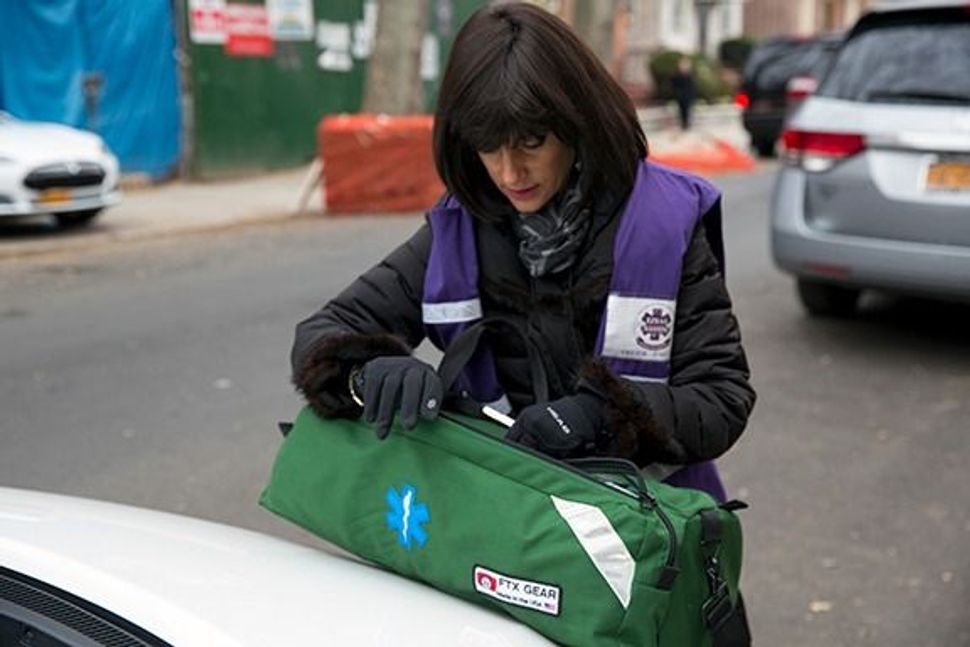 Packing Her Bag: Judge Freier started her own EMT service. Image by Courtesy of 93Queen

Update note: At 5:03 p.m. on November 20, this story was updated to show that Ezras Nashim’s ambulance permit application is in limbo due to an inconclusive vote.

Ezras Nashim, the Orthodox all-female EMT corps, still doesn’t know if it will ever get permission to buy its own ambulance after opposition from an all-male EMT service stalled their application — at least temporarily.

Ezras Nashim’s ambulance permit application is in limbo after neither side got enough votes from the Regional Emergency Medical Services Council of New York City (REMSCO). At least 14 of the 24-member panel needs to vote either to grant a permit or deny it. In this case, 12 members voted against; seven in favor; five abstained and two were absent.

Now the decision will be transferred to the New York State EMS Council (SEMSCO) in Albany; the date has not been announced.

Hatzoloh of Boro Park, the all-male Orthodox Jewish EMT service, opposed Ezras Nashim’s application in front of REMSCO, arguing that there is no “proven need” for a parallel service catering to Orthodox women, and that the group’s response times (8 minutes), which are slower than theirs (2.5-4 minutes), prove that they should not be in operation.

“We’re not allowed to have lights and sirens on our cars,” said Sarah Hussney, an Ezras Nashim EMT, before the meeting. “I’m sure our response time would be faster. That’s why we should have an ambulance.”

Four of the 12 REMSCO members who voted against the application were Hatzolah members.

“This has to do with Ezras Nashim proving need,” said Scott Orlanski, a representative of Hatzolah and a voting member of REMSCO. “This is about the facts,” he added, “Not the emotion bandied around.”

Ezras Nashim argues that their service is needed because many women in their community are uncomfortable being treated by male medics, given their religious value of modesty.

Ezras Nashim was first founded in 2014, when the fifty-year-old Jewish ambulance corps Hatzoloh denied applications from Orthodox women to serve as medics on their ambulances. A group of women, most visible among them Ruchie Freier (now a criminal court judge in the Kings County 5th judicial district), decided to start their own corps, to cater to ultra-Orthodox women’s sensitivities. (“Ezras Nashim” is a term which generally refers to a synagogue’s women’s balcony, but can also mean “the aid of women.”)

“We have considered the modesty issue many times over the years,” said Rabbi Yechiel Kaufman, a rabbi who opposes the license, according to a report in the New York Post about a previous hearing. “The associated risks of having two emergency services so disparate… far outweigh the benefits to the community.”

The group received public attention with the documentary film “93Queen,” which chronicled its inception. Today, Ezras Nashim serves Brooklyn’s Boro Park, with around 20 EMT volunteers on its team. They also operate in Monsey, Flatbush and midtown Manhattan. In 2019, they served 450 women, from childbirth to falls in the shower to burns in the kitchen.

The tension between the two groups is part of a much larger battle — over the right of Orthodox women to define female modesty, on their own terms, and based on their own experiences. It comes into play, for example, in the debate over the publication of women’s pictures in local magazines and over the communal dress code standards for women.

“As observant Jewish women, modesty is a way of life,” Ezras Nashim insisted in its application to REMSCO. “It dictates the way we dress, speak and act on a daily basis. Our personal identity and the defining characteristic we bring forth is our dedication to modesty.” According to them, treatment from either men in their community or outsiders with local hospitals’ ambulance corps can lead to traumatic experiences for women not used to physical contact with male strangers.

Orthodox Female EMTs Hit Setback In Fight For Their Own Ambulance