Trash Pickup On Shabbat: How NYC Sanitation Created A ‘Mountain of Garbage’ Outside Boro Park’s Yeshivas 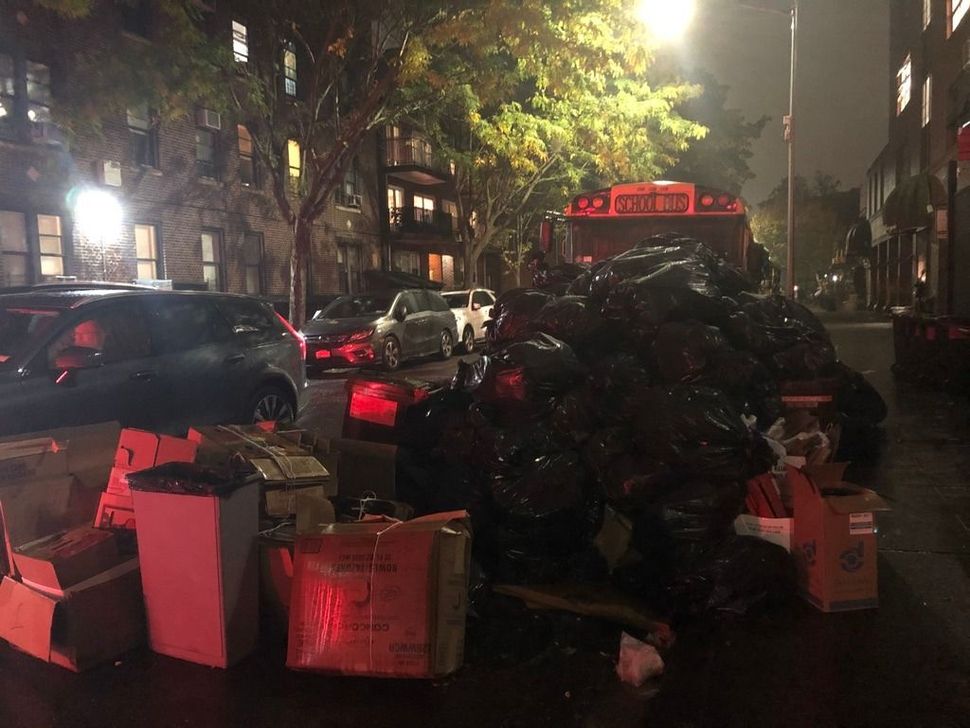 Trash outside of a yeshiva in Boro Park on the day before pickup. Image by Molly Boigon

On a drizzly autumn night in Boro Park, Brooklyn, scholars with peyos rush home from study, little boys play on bikes and scooters and a door opens to a hallway where two men stand in the curl of their cigarette smoke. All around them on their neighborhood streets, an obstacle blocks their sidewalks, rises above the cars and fills their nostrils with a familiar stench: trash.

“The garbage is all over,” said resident Grace DeVillo Genco at the last community board meeting in Boro Park. “What is going to be our recourse to have the streets cleaned?”

Residents and local officials complain about trash heaps on their sidewalks, and say the sanitation department’s failure to account for the neighborhood’s unique Jewish character has contributed to the problem.

In September, the city’s Department of Sanitation reduced trash pickup at 28 schools in District 12 — which includes Boro Park — from daily to twice weekly as part of the rollout of compost collection in New York.

Now each school gets compost collection five days a week, paper recycling four days a week and other recycling three days a week. Garbage is collected only two days a week. But residents and local officials say that’s not enough in Boro Park, where there are so many large schools.

“We have buildings with thousands of children in them, schools that serve breakfast, lunch and dinner, who are getting twice-a-week pickup,” said District 12 Manager Barry Spitzer at September’s community board meeting.

Spitzer cancelled a scheduled interview, did not respond to subsequent calls and emails and walked away from a reporter at a public meeting.

District 12 is one of the top daily garbage producers in Brooklyn, according to the Department of Sanitation.

According to monthly collection data from the city’s open data portal, it produced the highest volume of trash in Brooklyn between January and October of 2019.

Part of that high volume comes from the yeshivas in Boro Park, which make up a quarter of the district’s schools. The yeshivas have higher enrollment than most private schools to serve the neighborhood’s substantial Haredi population and their large families.

Boro Park’s schools have bags of garbage growing in front of them like weeds, and when trucks come to pick up the trash, residents and elected officials say sanitation workers leave burst bags in the street and ditch the ones that don’t fit in overstuffed trucks.

There are steps sanitation departments can take to make sure they time pickup correctly and service areas with the right number of trucks, said Bryan Staley, president and CEO of the Environmental Research & Education Foundation. He said they should analyze school and residential garbage before changing collection services.

A “waste characterization study” would help the city ensure the right number of pickups by analyzing how much waste is compost compared with garbage. The city might have underestimated how much garbage is generated in District 12, said Staley.

The sanitation department’s last study of this kind was in 2017, and the department declined to answer a question about whether Boro Park was included. A spokesperson said only that waste samples were taken from all five boroughs.

A language barrier also might be playing a role in the trash pileup. There are nearly 36,000 Boro Park residents who speak Yiddish at home and about 9,400 residents who speak Spanish or Spanish Creole at home, according to the most recent American Communities Survey data.

The sanitation department visited each of the seven yeshivas between two and four times during August and September to help train school leadership and facility managers. But they did not provide school outreach in Yiddish, although the outreach team had a fluent-Spanish speaker, created Spanish collection schedules and offered trainings in Spanish. The sanitation department did create outreach materials in Yiddish when they started collecting compost from homes.

A cultural disconnect could be thwarting the organics collection effort as well. Even in Israel, where more than 1 million people are Haredi, city governments have struggled to implement green initiatives in Orthodox areas. Many religious Jews have come to see environmentalism as something secular and left-wing. Torah study holds the spiritual above the material, and elements of the Haredi lifestyle generate a lot of trash, like disposable dishes and diapers.

Separating the organic waste is also a lot more work for yeshiva staff.

“We used to grab the tablecloths and throw it into the garbage can,” said Isaac Friedman, custodian at United Talmudical Academy of Boro Park. “Now, we have to take each and every plate and divide food over here, the plate over here. Imagine you have to do it every day, and if we serve two shifts of lunch, we have to do it between every shift. It’s a lot of work.”

Friedman has been the custodian at the yeshiva for 15 years, and he said he’s never seen anything like the “mountain of garbage” that regenerates twice weekly outside the building.

“You could see a couple hundred bags,” he said. “It’s disgusting. It stinks.” 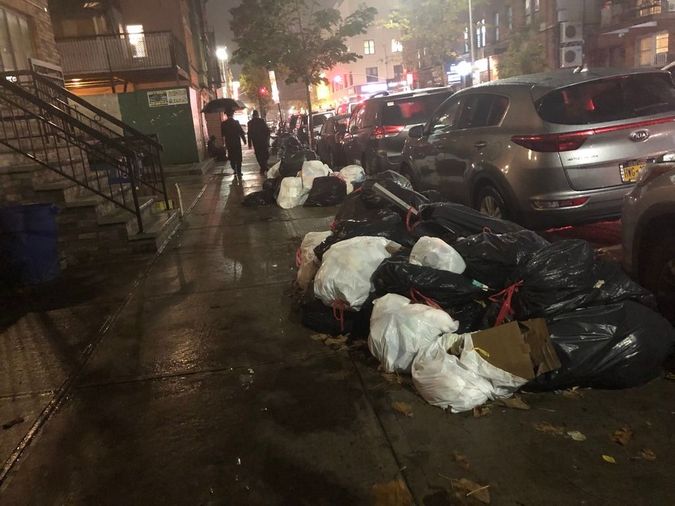 Trash on the street in Boro Park. Image by Molly Boigon

Brooklyn Boro President Eric Adams said in an interview that the sanitation department has not adequately communicated with residents about the organics program and needs to “fit the community” and not “do their job in their own sandbox.”

“There’s been a lot of miscommunication, but I also think it’s a big mistake for the city to take this one-size-fits-all approach,” said Adams. “I think that failure to really understand the uniqueness of communities is preventing the agency from getting the full benefit of keeping the streets clean.”

District Manager Barry Spitzer and City Councilman Kalman Yeger have both spread unsubstantiated claims that the sanitation department is punishing the district. They have said the department reduced trash pickup at the schools after a lack of participation in the residential organics collection program.

When asked about those accusations, a spokesperson for Boro President Eric Adams wrote in a statement, “We have not heard that information.”

Like Barry Spitzer, Kalman Yeger did not respond to multiple interview requests.

Despite the challenges in Boro Park, environmentalists hope residents will participate in the organics collection program— and cut the Department of Sanitation some slack.

“I know people are very passionate about how many pickups they get,” said Justin Green, executive director and founder of Big Reuse, an environmental nonprofit. “I think composting is a valuable program and the city and the department of sanitation has been a national leader in getting it established.”

Trash Pickup On Shabbat: How NYC Sanitation Created A ‘Mountain of Garbage’ Outside Boro Park’s Yeshivas