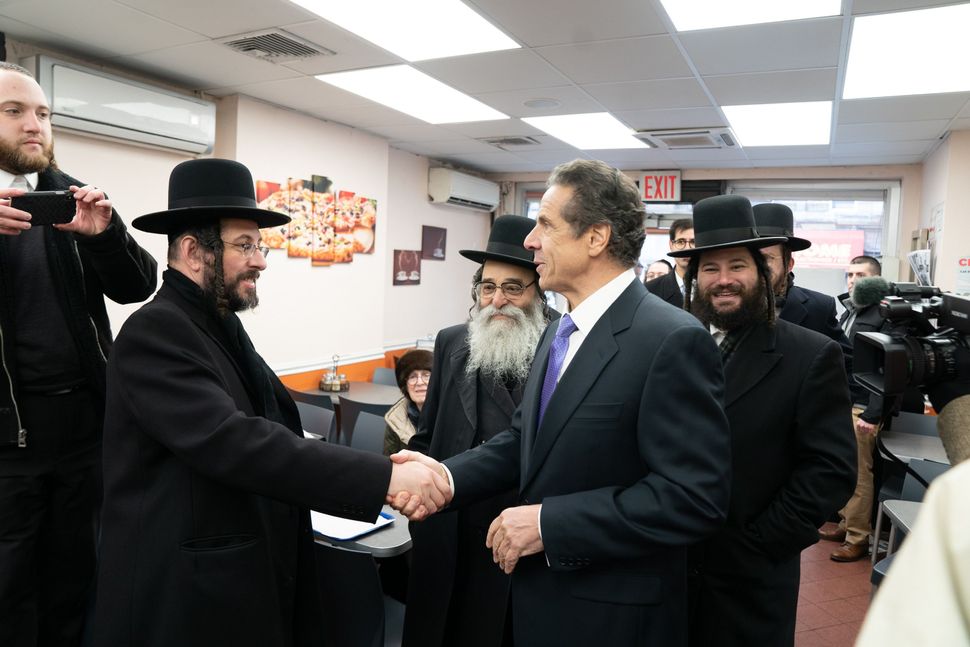 Governor Cuomo visits an Orthodox Jewish neighborhood in Williamsburg with Rabbi David Niederman to show support for the Jewish community in the wake of the stabbing in Monsey and a recent rash of other anti-Semitic attacks. Image by Office of Governor Andrew Cuomo

Over the past few weeks – after the violent attacks at a kosher supermarket in Jersey City, New Jersey and a Hanukkah party in Monsey, New York – officials have come forward with proposals about how to respond. Here’s what you need to know about what local, state, and national government leaders are responding:

Speaking at a December 31 press conference flanked by Jewish leaders, Senate Minority Leader Chuck Schumer said he would push to quadruple the Department of Homeland Security’s annual Nonprofit Security Grant Program to $360 million. The grant program, which is already relied upon by dozens of Jewish institutions to pay for safety improvements, had already increased from $60 to $90 million as part of an appropriations bill passed by Congress and signed into law by president Trump last month.

Schumer also pledged to increase funding for a program that pays for Department of Justice experts to train state and local officials in investigating and prosecuting hate crimes.

Rep. Max Rose, the chair of the House of Representatives’ Subcommittee on Intelligence and Counterterrorism, is holding a hearing later this month to investigate the federal government’s response to anti-Semitic attacks.

Rose is also one of the top co-sponsors of Rep. Adam Schiff’s bill that would for the first time make domestic terrorism a federal crime.

In response to the skyrocketing number of attacks on Jews in his city, especially in Brooklyn, De Blasio earlier this year launched the Office for the Prevention of Hate Crimes, which will partner with the New York Police Department and Department of Education to direct resources to targeted communities.

De Blasio announced after the Monsey attack that the new office will create interfaith, multi-ethnic Neighborhood Safety Coalitions in three of the areas of Brooklyn most affected: Williamsburg, Crown Heights and Borough Park. The coalitions, made up of community leaders, will meet regularly to strategize how to deter acts of hate besides police intervention.

In Brooklyn, the Anti-Defamation League is doubling its funding of its “No Place for Hate” anti-bias curriculum across public schools, particularly focusing on Crown Heights and Williamsburg.

Others are taking a more national perspective. Currently, only 12 states require Holocaust education in their public school curricula (though that includes five of the six biggest states). A bipartisan bill led by two members of Congress from New York (where Holocaust education is mandatory) would provide money for school districts to develop and improve their own Holocaust-related lesson plans.

A major rally against anti-Semitism is scheduled for Sunday in Brooklyn, sponsored by the city’s biggest Jewish organizations. City and state leaders in New York and New Jersey have been holding meetings with local Jewish leaders to address concerns – though some have not gone so well.

De Blasio was reportedly excoriated in Borough Park by attendees frustrated with his previous claims that President Trump and white nationalism were to blame for the rise in hate crimes (many of the arrested alleged assailants have been young men of color).