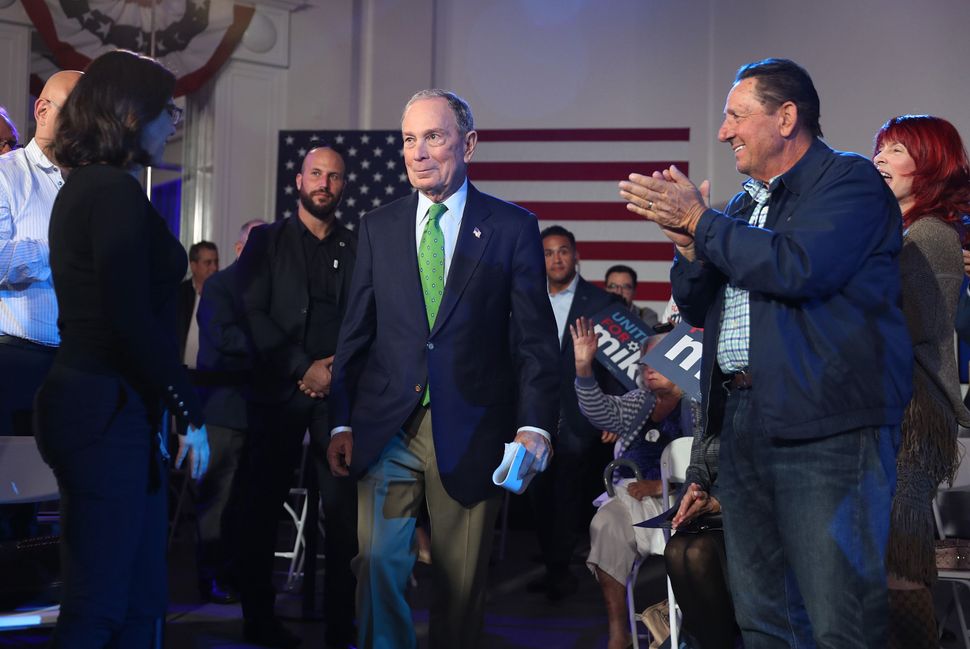 For nearly 50 years of her life, Shelley Herman lived in Manhattan – most recently the East Village – and when New Yorkers felt flattened by the terror of 9/11, it was Mike Bloomberg, in her opinion, who truly got the city back on its feet again.

“He did so many things to bring normal life back to New York. He would say, ‘Don’t be afraid to ride the subway,’” said Herman, a former bookkeeper who now lives in Delray Beach, Fla. She was one of about a hundred people who had crowded into a storefront to mark the opening of a local office that calls itself Team Mike.

“I think he will do what he says, because that’s how he is,” added Herman, 70, who sports short blonde hair and a lot of energy. “I don’t think having made a lot of money makes you a bad person.”

Herman was one of hundreds of volunteers who arrived at newly opened Bloomberg field offices across Florida this weekend — 14 in all, with a total of 20 planned in advance of the Florida primary that is now just three weeks away. In a newly renovated shopping center on Glades Road, a key artery that runs through the affluent Boca Raton suburbs, people signed up to make phone calls, grab lawn signs and bumper stickers and hear a popular Democratic congressman give a rousing endorsement of Bloomberg’s candidacy.

This purple state is a kind of crown jewel on the way to the nomination, and in every general election but one in the last half-century, Florida has voted with the winning candidate. In that battle, Bloomberg has a built-in constituency that knows him from the old country, as it were: new Floridians who lived in New York when he was mayor; those who made Florida home long ago but have stayed in New York’s orbit and others who split their time between the two. The route from New York to Florida is well-worn, and for American Jews on the East Coast, it’s almost like the other aliyah. Indeed, more than 63,000 people moved from New York to Florida in 2017 alone, according to the Census Bureau.

Such snowbirds are a key component of the Jewish community in Florida, which has an estimated Jewish population of around 645,000, according to the American Jewish Year Book. That’s only around 3% of the state, but most delegates to the Democratic National Convention are awarded by congressional district, and South Florida has three districts where Jews comprise more than 10%, according to the Berman Jewish Databank. In those districts, the Jewish population can become a powerful voting bloc.

Bloomberg may have had lackluster debate performances — taking beatings from Democratic rivals that made one of America’s wealthiest men seem awkward and unprepared — but his backers say he still has time to make his case ahead of the Florida primary on March 17. Yet one recent Florida poll shows him as the Democrat most likely to beat Trump in November. In the showdown between two septuagenarian Jews from New York, who happen to represent the polar opposites of policy in the Democratic party, Florida is more likely to “like Mike” than to “feel the Bern.” (Although another poll released Monday shows Bloomberg with only a narrow lead over Sanders and Biden in Florida.)

Carol Super Gold, a retired media advertising executive for Time-Warner who spends more than half the year on Singer Island in Palm Beach County, said she had already voted by mail for Bloomberg and was now focused on trying to encourage friends and neighbors to support him as well, either by early voting from March 7-14, or on actual day slated for the presidential primary, March 17.

“He was the best mayor that New York City has ever had, without a doubt,” says Super Gold. “The city worked extremely well while he was mayor, crime went down and more people found jobs. New York is as difficult to manage as the country is, in its own way.”

Bloomberg does, however, bring some New York baggage to the national race as well. Some are disturbed or even disgusted by “stop and frisk,” the policy by which police would search people on the street at will — and the impact it had on people of color. The recent focus on Bloomberg’s numerous non-disclosure agreements or NDAs with women who worked for him are also making some people think twice about his candidacy.

At Grove, a kosher supermarket, writer Nancy K.S. Hochman said she would be very reluctant to give her vote to yet another man with a problematic record towards women. “I saw some arrogance there,” she said about his response to questions on these NDAs during the last debate. “It’s as if he thinks everyone should stand aside and let him battle Donald Trump.”

Leaving the store with their packages, a different set of shoppers indicated that Bloomberg looks to them to be the only alternative to Trump.

“He might bring some class to the office of the presidency, which we now see is lacking. He’s a successful businessman — he won’t give away the store,” said Jack Nussbaum, who spends part of the year in Florida and the rest of it in New Jersey. Bloomberg is the only Democrat he would consider voting for, because he considers everyone else in the race too liberal and not sufficiently pro-Israel.

Yet that’s precisely the reason why his grandson plans to give the president another four years. “I want to vote for an ally of the Jewish people, and to me that’s Trump,” Shmuel Nussbaum said.

Such discussions are happening in Jewish communities across the country — particularly among the Orthodox, which is the only stream of Judaism whose adherents have shown a clear trend over the last two decades towards supporting Republicans.

“Orthodox Jews are going to be sweating it out,” said Hank Sheinkopf, a New York-based political consultant who has worked for both Bloomberg and Trump. “Do they vote for the guy that saved their city, which they still identify with, and made it livable when it looked like it was going to go under?” Or, he added, do they vote for a Republican who has supported the Israeli government like no president before?

Such a mindset is common among many New York expats in Florida, who at heart are still more New Yorkers than Floridians, Sheinkopf said.

Many former New Yorkers from other backgrounds have signed up to work for the Bloomberg campaign, participating in phone banks in which volunteers call registered Democrats making the case for Mike. David Thompson, 68, a retired commercial pilot who lives in Ft. Lauderdale, is one of them – despite having been an independent most of his life. He calls himself a “common centrist.”

“I‘ve talked to Republicans who will vote for only one man who is a Democrat and that’s Bloomberg,” he said in a phone interview. “And I’ve noticed that most people from New York are already voting for him and they’re already happy with the job he did as mayor.”

Thompson says Bloomberg’s more recent work on climate change and green building drew him to the candidate as well. Thompson read and was inspired by “Climate of Hope,” a 2017 book Bloomberg co-authored with Carl Pope, a former head of the Sierra Club.

“Between climate change, gun control and all his philanthropic work, no one’s done more with his money for this country than Mike Bloomberg,” he said. “When you vote for him, you get a network of mayors and congressmen all over the country ready to work with him.”