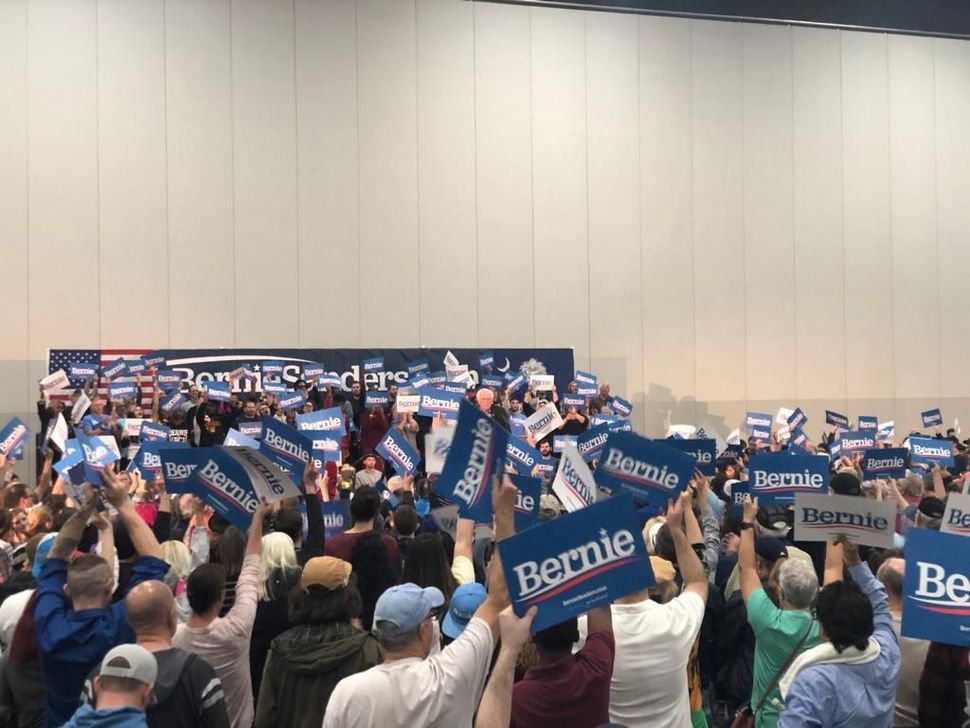 They had hair dyed pink and orange, heads covered by baseball caps, a bowler hat, a beanie and at least one hijab. A few foreheads were smudged with black for Ash Wednesday. One head eventually emerged above the rest, shining with sweat and humidity, and flanked by white hairs scattered in all directions like a field of dandelion puffs.

He entered the room to John Lennon’s “Power To The People,” and the crowd’s reaction indeed resembled Beatlemania. Screams echoed in the cavern of the Myrtle Beach Convention Center. Fans jumped up and down and took selfies. One person FaceTimed to beam the madness to a far-flung friend, while another sent a text: “I’m feeling the Bern lol.”

That big glowing head, of course, belonged to Sen. Bernie Sanders of Vermont, the frontrunner for the 2020 Democratic presidential nomination and the first Jew in history to carry that mantle. At a pair of rallies in South Carolina a few days ahead of the state’s primary on Saturday, Sanders did not seem to be aware that he looked disheveled and old, that he kept wiping his runny nose, that his thick Brooklyn-Jewish accent rang out like a bell through the convention center on words like “South Caroliner.”

He gestured with abandon, opening and closing his thumb and forefinger for emphasis, peppering his speech with the English dialect particular to retirement homes in Boca Raton: people were “sick and tired,” wondering along with him “how in God’s name.” His voice dripped with sarcasm suggesting it “might be a good idea” to have a president who’s read the Constitution.

“It doesn’t matter who his audience is: I feel like he always has the same thing to say and that’s consistent,” said Richard Holmes, 36, who came to the rally from Little River, S.C. “He doesn’t pander to a certain audience or demographic.” 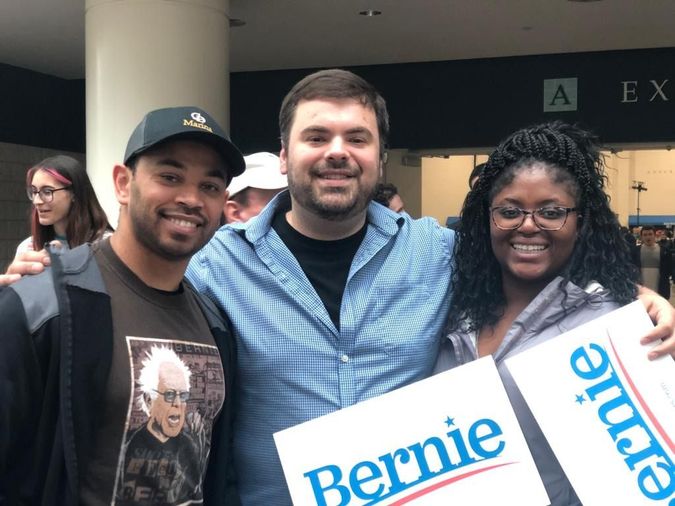 Sanders supporters in Myrtle Beach and North Charleston, S.C. expressed this sentiment again and again when I shadowed the Sanders campaign on Wednesday. He’s authentic. He’s real. He’s been the same person for 40 years and he will never change. What you see is what you get: an anti-establishment democratic socialist who tells The New York Times he doesn’t suck up to people by calling on their birthdays, who has no problem getting visibly angry on a national debate stage, and who refuses to play along and pretend he wants to bridge the growing gap between red and blue America.

That’s what got him this far — farther than any Jewish politician in history: winner of two out of the first three Democratic nominating contests, with more convention delegates racked up than any of his remaining six rivals.

But can it get him the rest of the way? If Sanders continues his march toward the nomination with strong performances here in South Carolina and then in the 14 states voting next week on Super Tuesday — and the big batch a week after that — it may become harder to maintain that air of authenticity.

There will be more political consultants and pollsters, Secret Service agents and the virtual bubble in which they shuttle the campaign apparatus around the country. There will be thousands of voices in his big ears, many more constituent groups and strategists struggling to lock his flailing arms rigidly in place.

Already, the risers behind Sanders — like those at presidential-campaign rallies everywhere — were a carefully curated rainbow of races, ethnicities, ages, suit jackets and neon-yellow work vests. The playlists were a militantly diverse mix of Elvis Costello, Vampire Weekend, Cardi B. and Sly and the Family Stone.

The speakers and performers who introduced him appeared to span as many marginalized identities as possible, a trans country singer and a queer undocumented immigrant of color among them. Like so many presidential candidates before him, Sanders was whisked by chartered jet the 100 miles between the North Charleston, S.C., and Myrtle Beach convention centers, where he shrugged and chuckled at the same tired joke from the same old stump speech.

And what many of his supporters praised as “authentic” and “consistent” is also known in the political game as “disciplined” and “staying on message.”

Unlike President Trump, Sanders actually sticks to his script. He uses the same expressions over and over, and never strays from his core talking points: Working-class people deserve more. Wall Street has too much power. Health care is a human right.

This rhetorical consistency helps convince voters he is committed to his stated priorities. The messy delivery and muddled appearance masks what is actually a militant and meticulously practiced pitch. 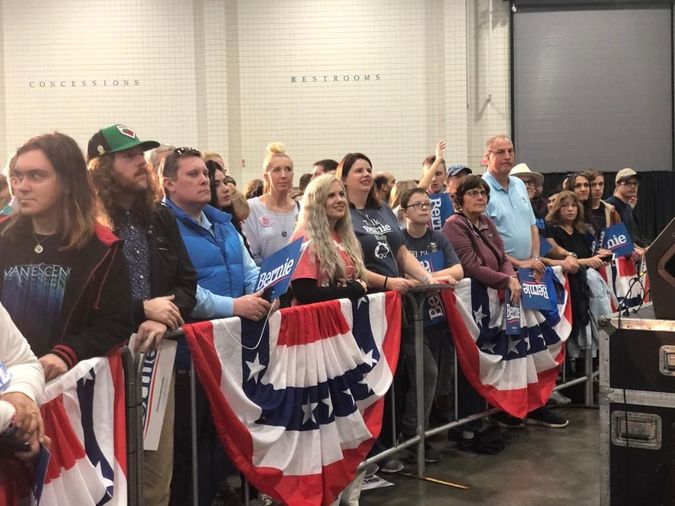 “He’ll stay the same,” said Kathy Foster, 59, who lives in Myrtle Beach, “and it is important that he keeps the same ideals.”

But Sanders is facing pressure to change — from the Democratic establishment, worried not only about his ability to beat Trump but also his effect on down-ballot races in swing states, and from Jewish leaders concerned that his aggressive criticism of Israel threatens its longstanding bipartisan support.

His praise on “60 Minutes” for Fidel Castro’s literacy campaign in Cuba launched a torrent of criticism from both moderate Democrats and Latinos — within hours of Latino voters helping thrust him into the No. 1 slot in last weekend’s caucuses in Nevada.

And on Wednesday, even as I was tromping around with him in South Carolina, CNBC reported a Democratic mega donor, Bernard Schwartz, is trying to convince House Speaker Nancy Pelosi and Senate Minority Leader Chuck Schumer to endorse another candidate in hopes of stopping Sanders from clinching the nomination.

For years, Sanders has brushed off questions about how he might pay for his ambitious promises of tuition-free college and universal health care by insisting that a government that can bail out bad banks and run decades-long wars can simply reprioritize to figure it out. But after repeated questions from voters, journalists and other candidates about the practicality of his proposals, the Sanders campaign folded during Tuesday night’s South Carolina debate and slapped a banner on his Website: “READ: How Bernie pays for his major plans.”

It is the essential challenge for every outsider-candidate. As he edges closer to the convention, will Sanders have to give an inch, maybe even a mile, to the establishment he eschews?

The voters I spoke to at his rallies say no.

“There are other candidates who already are changing,” pointed out Darlene Slusher, 51, who drove a half-hour from her home in Conway, S.C. to attend the Myrtle Beach rally with her pre-teen daughter, Lila. “Bernie is not going to do that and I have no fears that he would back out” of his positions.

The faces that turned upward to see this leftist Jewish septuagenarian during Wednesday’s rallies seemed to be hoping against hope as he railed against Wall Street and the prison industrial complex.

At the North Charleston event, the room had the feel of an island of misfit toys. Large men in work boots and thin young women in Doc Martens both smelled like cigarette smoke. Children sat on the floor and ate string cheese. Someone wore a pin showing a dead pig in a tophat, tongue hanging out, captioned “Eat the rich.”

In this crowd, Sanders seemed to be larger than his policies. Yes, he got big cheers for affordable prescription drugs and powerful unions. But this was a room full of people who had also saw themselves in his reflections. Sanders, like them, doesn’t care what people think. He isn’t polished or handsome or smooth. He is out of the mainstream, and quintessentially himself. 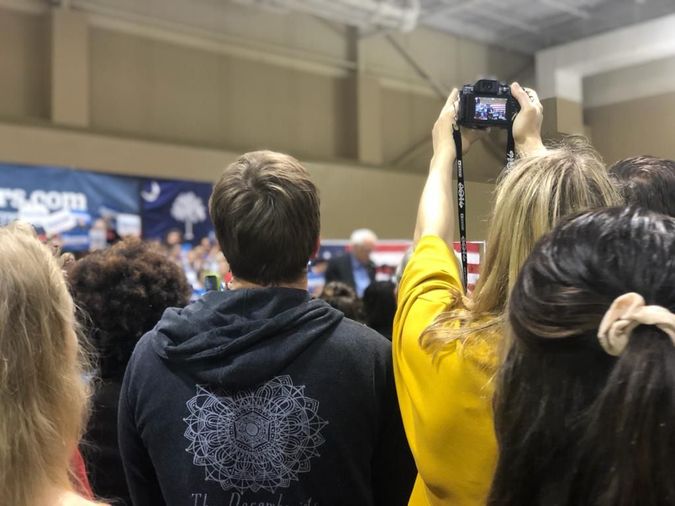 “Bernie’s said the same thing forever,” said Eileen Twitchell, 63, who was here on vacation from Boston. “He is what he is.”

Their fervent hope is that Sanders will succeed in winning the nomination, and later, the presidency. But they also hope he will resist the forces trying to fit him in the mold.