After over five years of dating, Miriam Wallach’s daughter and her boyfriend got engaged. But in their families, where support for Yeshiva University’s basketball team is as much a pillar of the faith as Torah and daily prayer, they made just one mistake.

They got engaged on game night.

Among Yeshiva’s superfans, it was a (mock) scandal. Wallach’s a third generation Yeshiva student; her grandfather played on the basketball team. Her soon-to-be son-in-law is the son of a prominent Orthodox radio host, another YU basketball nut — and whose show and career Wallach manages.

It’s been a banner year for the team, and their fans, who have endured decades of uneven performance from the Mighty Maccabees, or Macs. For just the second time in the team’s history, they have a berth in the NCAA Division III playoff tournament — and a fighting chance at going deeper in the tournament than many of their fans had ever thought possible. They even dodged a last-minute scheduling glitch, courtesy of coronavirus.

“In a million years, would you ever have expected to see five yarmulke-wearing players on the court win an NCAA championship?” Wallach said.

The Macs swept their conference, and have impeccable stats — more than 85 points per game on average, and an average margin of victory of nearly 15 points. Clips shared on Steinmetz’s Instagram show the team making fluid passes, taking confident drives to the basket, and landing huge dunks.

Division III observers have taken notice. The blog D3hoops.com’s Top 25 survey has seen Yeshiva’s team move from 24 nationally five weeks ago to 13 going into the playoffs.

But all around them was evidence of the chaotic week that preceded their historic tournament berth. On Wednesday, Yeshiva closed its main campus for the week after announcing that a student had tested positive for coronavirus. An hour before the team was set to arrive at their hotel outside Baltimore, where their first game is, the hotel cancelled their reservation, citing concerns about the spread of the virus.

Though the team was able to find another hotel that would take them downtown, it wasn’t the end of their struggles: Friday morning, the NCAA announced that there would be no spectators allowed at upcoming games, leaving Macs parents to watch the livestream of the game from their hotel rooms. According to Wallach, there are dozens of stories of fans who abandoned their drives from New York down to Baltimore when they got the news this morning.

And then there are the Orthodox Jews in Pikesville, a very Jewish suburb of Baltimore, that wanted to come show their support for the team. Instead, Wallach says, they’ve offered the team places for Shabbat meals on Friday night.

The Maccabees’ success comes after decades of middling performance in their New York City conference. Aaron Kinderlehrer, who has been attending YU games for over 40 years, says the history — and the success of this season — is roughly analogous to the travails and 2016 triumph of the Chicago Cubs.

Things started to change when Steinmetz became coach in 2014. Before: losing seasons, low scores, less attendance. Since: a winning record every year, and bleachers filled with fans.

Everyone is interested, from every corner of the Jewish world, according to Nachum Segal, the radio host, who hosts the popular Jewish program “JM in the AM,” and who is Walach’s boss (and future father-in-law of her daughter). Children want their birthday parties to happen at games — unheard of for a previous generation of Maccabees fans.

“We were sitting there when there were 100 seats for each of us,” said Segal. “And now, every board member wants to come to the games, it’s the hottest ticket in town.”

With Steinmetz at the helm, the team is poised to stay strong for coming seasons as well: Some of its best players this year are freshmen and sophomores.

But the secret sauce, Segal says, is love for Torah and Jewish values. Fans report that the team plays clean, the coaches are respectful — and they study a bit of Talmud before every game.

“The way that this team is succeeding on the court, and at the same time having serious, God- fearing Jews perform this way in their basketball pursuits, is the culmination of every dream the fans ever had,” Segal said.

But being an observant Jewish fan comes with its dangers, from a Sandy-Koufax-on-Yom-Kippur perspective. Friday’s game got pushed to a 2:15 p.m. start, putting it within free throw distance of the Sabbath’s 5:35 p.m. candle lighting time, after which observant Jews cannot use electronics — even to watch a Jewish basketball team. Speaking shortly before the opening tip-off, Segal, who was planning to watch the game on his phone on his way to Long Island for Friday night dinner, was worried about missing the last seconds.

“My greatest fear is that it goes to double overtime, and YU has to say, ‘Sorry, we have to leave,’ and forfeit the game to go celebrate Shabbos,” Segal said. “Actually, it would be the greatest thing to happen, like ever, but it would kill me as a fan.” 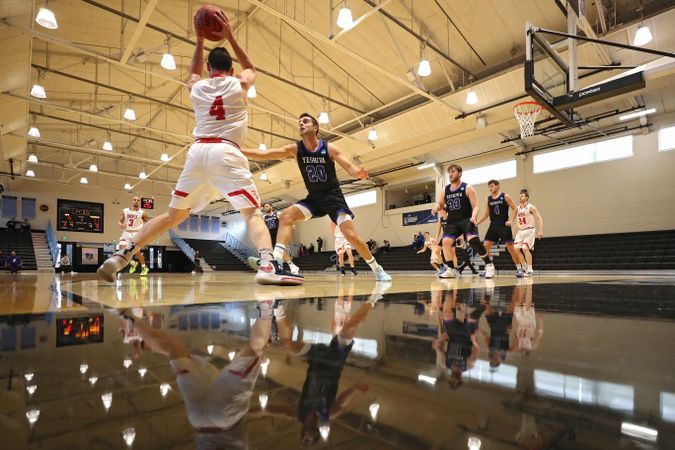 The teams played in a nearly empty gym, after the NCAA cancelled spectator attendance out of fears of spreading coronavirus. Image by Getty