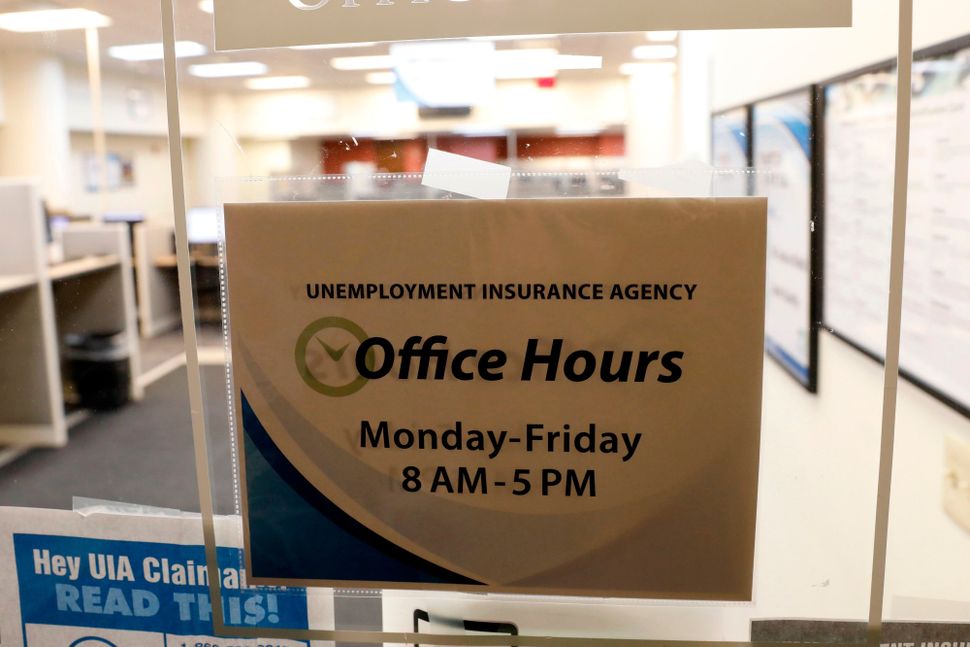 A State of Michigan Unemployment Agency office is seen in Cadillac Place that is currently closed because of coronavirus, COVID-19, in Detroit, Michigan on March 26, 2020. Image by JEFF KOWALSKY / AFP

Bryan Leib got the dreaded call last week. His employer, the Jewish nonprofit Americans Against Antisemitism, was laying him off due to uncertainty caused by coronavirus.

“We’re not a large nonprofit, and we found ourselves having to make tough decisions,” said Leib. “The last thing people are thinking about, I think, is giving to a nonprofit fighting anti-Semitism.”

As the federal government announced that an unprecedented 3.2 million people have requested unemployment assistance, the Jewish community is feeling its share of the pain. Some nonprofits, like Leib’s employer, have laid people off. Many kosher restaurants and other Jewish-owned businesses shuttered for the foreseeable future.

Yet the more than 70,000 people who work for Jewish not-for-profit organizations are slightly more insulated from the economic crash than their counterparts at businesses. If the last recession is any indication, the crunch won’t come for most nonprofit employees for another few months.

Avrum Lapin, a consultant for not-for-profits and philanthropic foundations, said that many donors and organizations had learned from the previous crash. Philanthropists do more due diligence on their grantees’ finances, and the groups themselves do more financial planning.

This means that the larger and more established groups should have an easier time weathering the storm – but the converse of that is that smaller and newer groups, like the year-old Americans Against Antisemitism, are more vulnerable.

Indeed, helping laid-off Jewish communal professionals is part of the core mission of a newly announced coalition of the largest Jewish groups in the country. This task force will also coordinate fundraising and services.

“We’re all trying to understand not just the immediate, but the long-term financial implications of the crisis on our member organizations,” said Paul Bernstein, CEO of Prizmah: Center for Jewish Day Schools, one of the coalition members. “And therefore, working together on how to analyze what the economic impact might be is very valuable.”

According to the Department of Labor, service industries have seen the largest spike in unemployment claims nationwide, but several other sectors have also seen surges in closings and layoffs, including entities dealing with health care and social assistance, arts and entertainment, and recreation — all of which are represented among Jewish nonprofits.

For example, the Tenement Museum in New York’s Lower East Side had massive cutbacks last week, down from 138 full- and part-time employees to a skeleton crew of five that are still receiving full-time pay.

Yet it took around six months after the Great Recession began in 2008 for most Jewish organizations to do large-scale layoffs, though some organizations with lower cash reserves – especially those affected by Bernard Madoff’s Ponzi scheme – did harsher cuts quicker.

“During the subprime crisis, there were absolutely organizations that had to close,” said Lila Corwin Berman, a professor of Jewish history at Temple University and an expert on Jewish philanthropy. “A bunch had to reinvent themselves or scale back.”

Full sector-by-sector employment data won’t be available from the government for another week. But it’s likely that nonprofit employees actually have slightly more protection than those who work for for-profit businesses, which are more reliant on consistent daily or weekly income.

Indeed, both Bernstein and Stosh Cotler, the CEO of the Jewish progressive advocacy group Bend the Arc, said that many of their donors had proactively reached out and affirmed that they would continue to donate to their organizations — and that means people will keep their jobs.

“Will people give less? Some may,” said Lapin. “And some may be driven by personal commitment and give whatever it is that they might have given otherwise.”

Even if some donors do scale back their giving, not-for-profits are also eligible for some of the provisions of the $2 trillion aid package passed by the Senate. For example, charities will be eligible for loans from the Small Business Administration to help them meet payroll, and sectarian schools are eligible along with public schools for emergency response funds.

Looking ahead, the price of the pandemic could be greater than lost dollars and staff cuts. Organizational missions could fall by the wayside, and for some nonprofits, that’s a matter of life and death.

“The one group of people that are probably using this to their advantage to organize right now are the Jew-haters in this country,” said Lieb. “I fear that by taking our foot off the gas pedal, so to speak, that we’re giving them an opportunity to organize and plan for whatever’s next.”