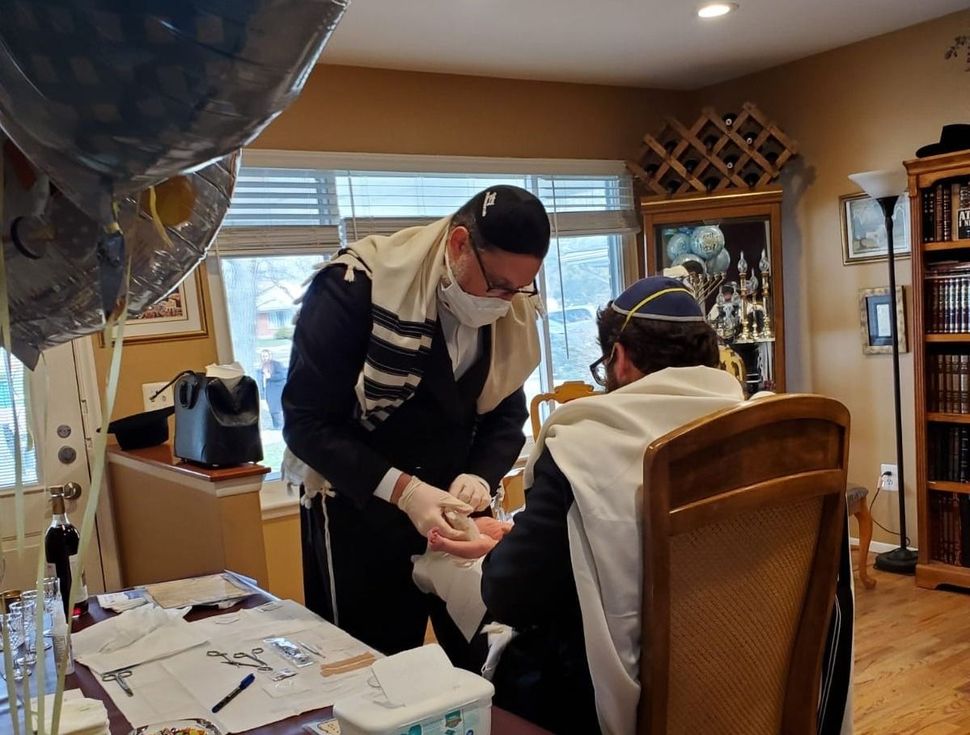 Becky Lustgarten is due to give birth to her first child, a boy, at the end of April. Pre-pandemic, she and her husband, Taylor, felt committed to following the Jewish mandate for circumcision on the baby’s eighth day of life, though she admitted being “a little not-so-thrilled” anticipating the painful procedure.

Now the couple, who live in Hoboken, N.J., have decided to forego the brit milah ritual, commonly called a bris. In this era of social-distancing, the idea of inviting a mohel, or ritual circumciser, into their home was a no-go — never mind the dozens of friends and relatives typically invited to witness the event and celebrate with a meal afterward.

“I don’t know if maybe we’re making the wrong decisions in not having our families, but all of our parents are over 60, so we thought it seems like a safer option,” Becky Lustgarten said in an interview.

With synagogues and schools closed across the country, the novel coronavirus has stopped much of American Jewish life in its tracks — or at least profoundly changed its trajectory. But it can’t stop childbirth, and so thousands of Jewish parents are going to have to decide how – or whether – to conduct circumcisions, one of Judaism’s oldest and most widely adopted commandments.

One common approach so far is to take extra medical precautions – minimize the number of people who attend, and make sure the mohels, who are almost always either rabbis or medical professionals, wear extra protective equipment.

Yisrael Pinson, an Orthodox rabbi and mohel who co-runs Chabad of Greater Downtown Detroit, recently conducted a brit milah where he wore an N95 mask and surgical gloves, and the only other person in the room besides the baby was the father, who was also wearing a mask and gloves.

“The ceremony was very emotional for the family and myself,” he said via direct message. “I was reminded of my great-grandfather, who was performing clandestine ritual circumcisions in Leningrad in the 20s and 30s. He would go to a house and no one was present besides the father and baby.

“Eventually he was executed by the Soviets because of this ‘sin,’” Pinson continued. “Today, no regime is preventing us from performing this mitzvah, but the circumstances are such that it’s more complicated and more limited, yet we are finding creative ways of continuing the tradition of milah on the eighth day.”

Tova Lerer, who is also Orthodox and lives on Long Island, gave birth to her third child and first son earlier this month: his bris was March 22. Because the coronavirus situation was developing rapidly at that point, she said, the advice from her rabbi and doctors kept changing. First, the family was told that they could have the 10 people required for a minyan, or prayer quorum. But as the day approached, that seemed increasingly unwise.

In the end, only Lerer, her husband and his parents, brother and niece — who live nearby — came. Everybody wore masks and gloves and stood far apart. “It was very emotional,” she recalled, “especially for my husband, because he was anticipating something different.”

But, like so many things in life these days, the ceremony was live-streamed via Zoom — which meant more than 100 friends and relatives from all around the world who would never have come in person were able to tune in. “In a way, it was bigger than anything we could have anticipated,” Lerer said.

Other have decided to delay the circumcision, or at least the ritual aspect of it.

“There’s been a lot of conversation on our listserv about this,” said Rabbi Julie Pelc Adler, the executive director of the Brit Milah Program of Reform Judaism, which has trained hundreds of mohels. Some are doing the ceremony with only the parents in the room, while others watch on livestream, she said. Then there are some, especially those who also work as frontline medical professionals, who are refusing to conduct the ceremonies because they don’t want to accidentally expose the babies or their parents to infection.

Because of the Jewish concept of pikuach nefesh — suspending religious obligations for health-related reasons -– there is longstanding precedent, accepted across all denominations, for delaying a brit milah if it would harm the infant, such as when it’s born prematurely. But Pelc Adler said that parents shouldn’t wait too long to circumcise.

“After the baby is a certain weight and age, circumcision has to be done under general anesthesia in an operating room, and many parents won’t want to do that,” she said. Besides, such elective surgeries across the country are on hold while doctors prioritize coronavirus patients (a regular eighth-day circumcision is not considered such a surgery, and is typically not done in the hospital).

In the United States, many hospitals offer circumcision to all newborns as part of their regular postnatal care. Babies who are circumcised in hospitals can have a bris-like ceremony on the eighth day, or at any point thereafter, known as a Hatafat Dam Brit. It involves drawing a pinprick of blood from the area, and is the same procedure that is used on circumcised adult males when they convert to Judaism.

But that’s not always possible in other countries, where circumcision of babies who are not Jewish or Muslim is rare. Britain’s Association of Reform and Liberal Mohelim announced last week that they were suspending circumcisions. “Because pikuach nefesh has got to come first and circumcision can wait, we have to be sure we are not exposing anybody to risk,” Rabbi Margaret Jacobi, joint chair of the Liberal Beit Din, told the Jewish Chronicle. The British union of Orthodox mohels said they would continue brit milah for the time being, but limit attendance to parents.

However, not everyone is so cautious. Rabbi Gedalia Oberlander of Monsey, N.Y. – a Haredi Orthodox enclave that has since seen a coronavirus outbreak – proclaimed on March 20 that not only should brises go forward, but that mohels should continue metzitzah b’peh, the controversial practice adopted by some Orthodox Jews in which the mohel uses his mouth to suck the infant’s blood away. Oberlander stated that mohels should first wash their mouths with Listerine, which he claimed would “destroy the virus.” (There is no evidence that Listerine kills the coronavirus, while there is evidence that metzitzah b’peh can lead to herpes infections.)

Pelc Adler, for her part, said that there would likely not be a blanket policy in the United States, even within a specific denomination, because rabbis and mohels want to have flexibility based on the outbreak situation in their specific area.

Lustgarten, who described hers as a “mixed marriage” – she’s Conservative, he’s Reform – said that right now, the plan was to have the circumcision in the hospital and do a ceremony later on, when family and friends could be present. Her non-Jewish friends have told her that they barely noticed their sons’ medical circumcisions, that the doctor just took the baby away and brought him back a minute later.

Still, she is thinking about how to maintain the distinctive Jewish ritual around the procedure.

“We might wait to announce his name until after the eighth day,” she said. “It might be silly, but it might be the only traditional thing we’re able to hold on to.”