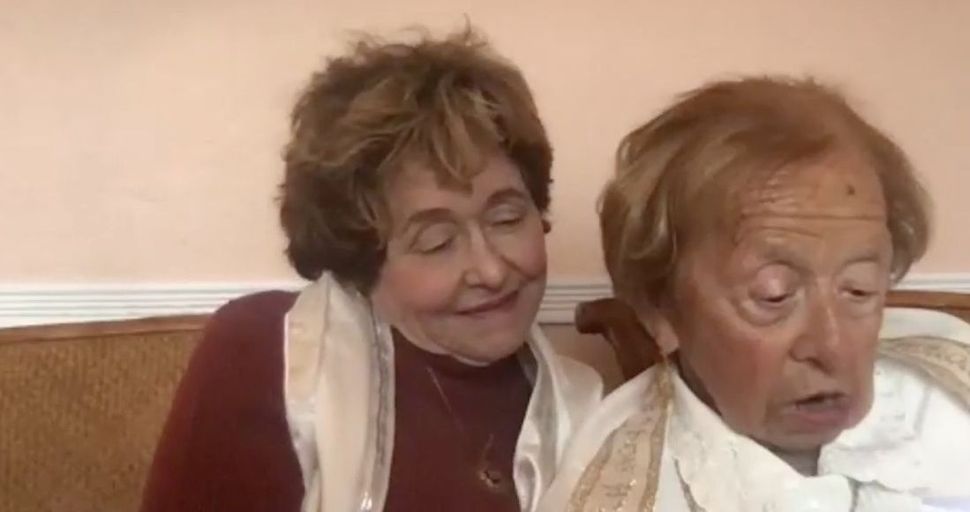 Hilda Namm at her Zoom bat mitzvah on April 4, 2020. Image by Jon Regardie

Carefully, with great precision, Hilda Namm recited the Hebrew words from the 25th chapter of the Book of Exodus.

Her daughter Evelyn sat closely beside her on the couch in Hilda’s home. The two were close together, their shoulders often brushing, Hilda in a white top with a wide collar, Evelyn wearing burgundy. Evelyn handed her 94-year-old mother the words of Torah on a sheet of paper.

Hilda read the Hebrew, in her German accent.

Meanwhile, on screen, Cantor David Margules used his cell phone camera to show the Torah opened to the right portion.

Even by the unusual standards of life under the coronavirus pandemic, Hilda Namm’s bat mitzvah stood out.

Of course, it took place over the social chat app Zoom, with the rabbi, a cantor, and several dozen friends and family participating online in what passes for attendance.

But it also marked the end of a long journey for Namm. In 1938, as she was turning 13 — the traditional age of a bat mitzvah — Hilda endured Kristallnacht, the Night of the Broken Glass, when Nazis attacked Jews and Jewish stores throughout the city. Shortly after, her family escaped Germany. They found their only refuge in Shanghai, China, where they lived in the city’s Jewish ghetto, enduring Japanese occupation. 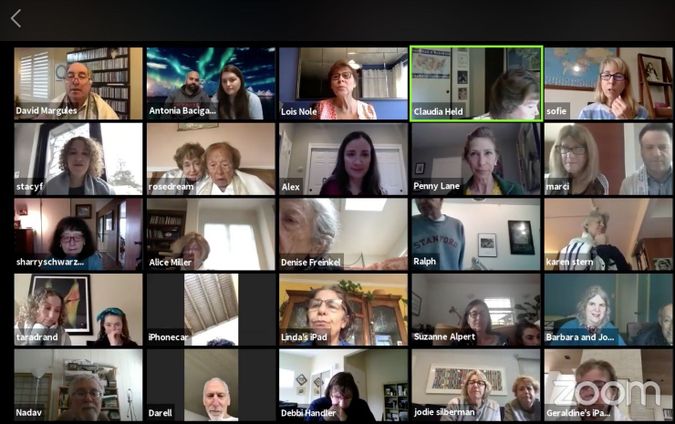 “It was hot in summer and there was lots of rain in winter,” Namm recalled in an interview with the J Weekly in March. “We had so much rain that it flooded the streets — you could see things swimming [and drowning], even babies.”

Almost all of her father’s siblings and many of her mother’s family members died in the war.

Namm survived the hardship, attending a Jewish school in the British section. She stayed for nine years before heading, by herself, to San Francisco, and making her way alone. An online bat mitzvah is hardly the greatest challenge she has faced.

“It wasn’t bad,” Namm, who admits to being shy, told the Forward shortly after the ceremony. “Not as bad as I thought it would be.”

Namm began studying for her bat mitzvah approximately nine months ago, at a time when the world was far different. She was regularly out and about in the Bay Area community, going to the JCC, exercising, swimming and attending luncheons, said Evelyn.

Namm also visited the temple each week to work on her Torah studies with her fellow students, and in between visits she practiced regularly at home.

Friedman said Namm was a committed student. On the evening of March 12, she showed up at the temple for the regular b’nai mitzvah program. That night, the synagogue’s leaders opted to shift to remote services amid the growing threat of the novel coronavirus.

“That was the last day the group, or any group, came to the synagogue,” Friedman said. “She was up there on the bima — it was a real reflection of the strength and tenacity and wisdom Hilda has. We almost had to force her off the bima.”

The social distancing and stay-at-home orders that have gripped the nation naturally impacted the nonagenarian’s studies. Namm’s caregivers helped her stay connected via Zoom, and she began to work and prepare at home.

“My cantor helped. And my daughter helped a lot,” Namm said. “I’ve been struggling with it because I can’t see too well and I can’t hear too well.”

During the Saturday morning service, Evelyn read her mother’s commentary on the Torah portion. She detailed how Hilda Namm’s late father Sinai would have been proud. She described how her Torah portion concerned the Exodus from Egypt and the building of a sanctuary, and the community gifts and donations the project required.

“In this difficult time, I am hoping everyone in the congregation survives this epidemic,” said Evelyn, reading her mother’s speech. “I am looking forward to when we can all get together again at Rodef Shalom.”

During the ceremony, Friedman noted that whereas a bat mitzvah traditionally marks the time when one becomes “a daughter of the commandments,” the situation was different for Namm. The onset of World War II forced her to become an adult at a young age, the rabbi said, and in later life Namm grew into a pillar of her community. So Saturday’s ceremony had a unique twist.

“This is really an affirmation to the world of who she already has been,” Friedman said. “She’s such a leader in our community in multiple ways, and this is just an affirmation of all the mitzvot, and all the righteousness that she gives to the world already.”

That sentiment was apparent in the ceremony, which was also available on a Facebook livestream. As the service came to a close, and the Zoom users clicked off the mute button, a chorus of congratulations sounded.

“We love you, Hilda,” chirped another.

“Yasher koach,” added someone else.

And so it continued, until the Zoom session ended.