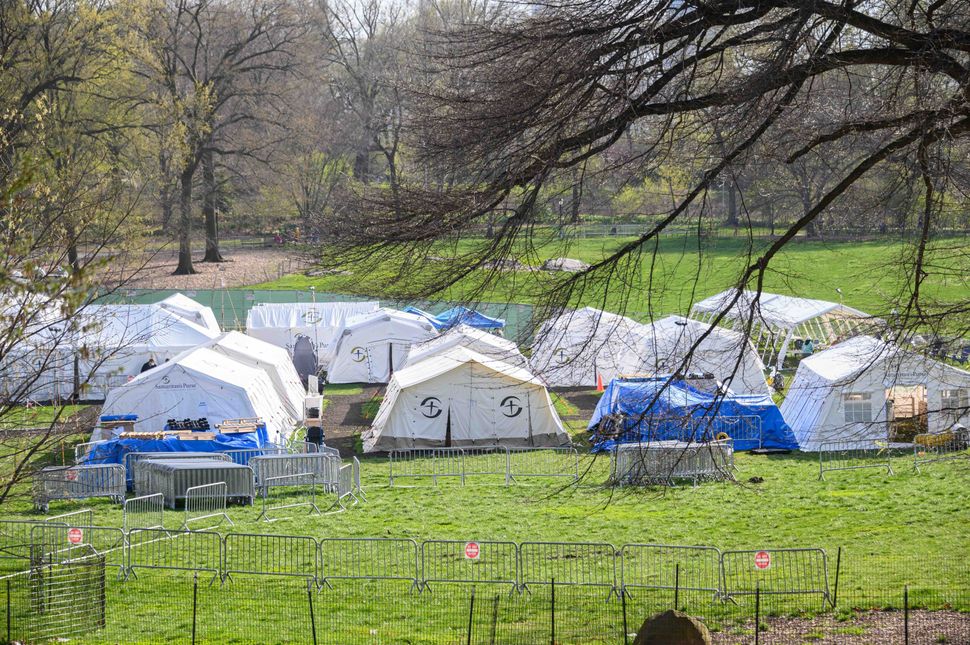 A prominent Reform synagogue in Manhattan found itself on the defensive over the weekend when some congregants protested its decision to highlight the Covid-19 response efforts of an evangelical Christian organization whose politics they abhor.

The group, Samaritan’s Purse, has set up a field hospital in Central Park, and Central Synagogue featured the group in its newsletter and on its website at the request of a congregant who has been volunteering there. The congregants have asked the synagogue to remove these notices, but the synagogue is pushing back.

Samaritan’s Purse asks volunteers to support a statement of faith that defines marriage as between one man and one woman. The group opposes legal abortion and its leader, Rev. Franklin Graham, has called Islam “a very evil and wicked religion.”

“I tend to be a pragmatist,” said Tilson, 53, who has been buying food for the group’s doctors and nurses as well as setting up tents and beds. “I’ll have the ideological discussions with them later. If they’re here saving my fellow New Yorkers’ lives, and not even asking to be paid for it, then I will absolutely help them do that.”

Central Synagogue, which was finished in 1870, is the oldest synagogue in continuous use in New York City. It has 2,000 member families, which makes it one of the largest congregations of the Reform movement, which is itself American Judaism’s largest denomination. The Reform movement is liberal both theologically and politically, and it has long accepted full participation of queer people in Jewish ritual life. Central itself has employed queer rabbis, and hosts gay pride events.

Last week, it included information about Tilson’s efforts in its daily email to congregants. It also included a request to donate boots to Samaritan’s Purse’s hospital staff, and Bluetooth speakers, to help provide music to patients. The synagogue listed more information about volunteering efforts led by Tilson on its website. That information is still on the site, and will stay there, said spokeswoman Jessica Cohen.

Nancy Gilman, a member of the synagogue for close to two decades, was one of the congregants who, along with several others, contacted Central leadership to voice her disapproval of featuring the work of Samaritan’s Purse.

“The values harbored by this group and its founder just completely fly in the face of what Central stands for,” she said. 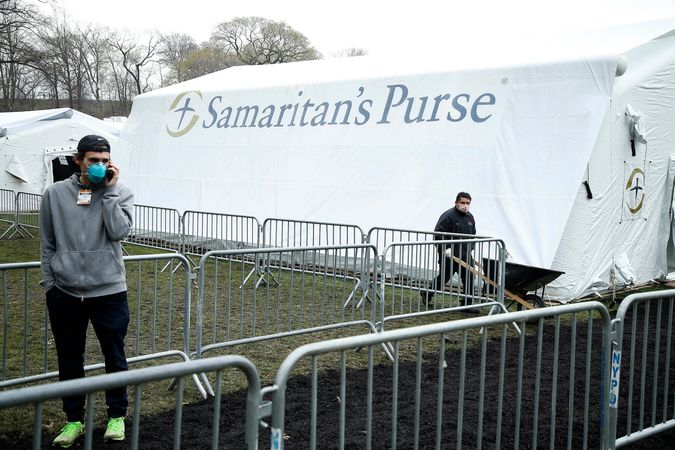 The Samaritan’s Purse temporary hospital in Central Park, in Manhattan. Image by Getty

Tilson, who runs an investment research site and used to head a hedge fund, defended his volunteer efforts, saying that he found Graham’s statements on sexuality “abhorrent,” and did not intend his volunteer work and $7,000 donation to be taken as a general endorsement of the group or of Graham.

“Central Synagogue’s ideology is first and foremost serving New Yorkers and healing the sick,” said Tilson. “That is by far the most important ideology of Central Synagogue, and this is entirely consistent with that.” He is not Jewish, but his wife and daughters are, and he has been a Central member for nearly 20 years, he said.

Samaritan’s Purse did not respond to a request for comment.

“This is a unique time with an urgent need and we felt comfortable supporting the efforts on the ground, not the organization itself,” the statement said. The synagogue will not feature Samaritan’s Purse in any future emails, said Cohen, the spokeswoman.

Tilson said Graham had called him to offer thanks for his volunteering.

“I’d like to sit down someday and have a heart-to-heart with him, and ask him to change the rhetoric,” Tilson said.