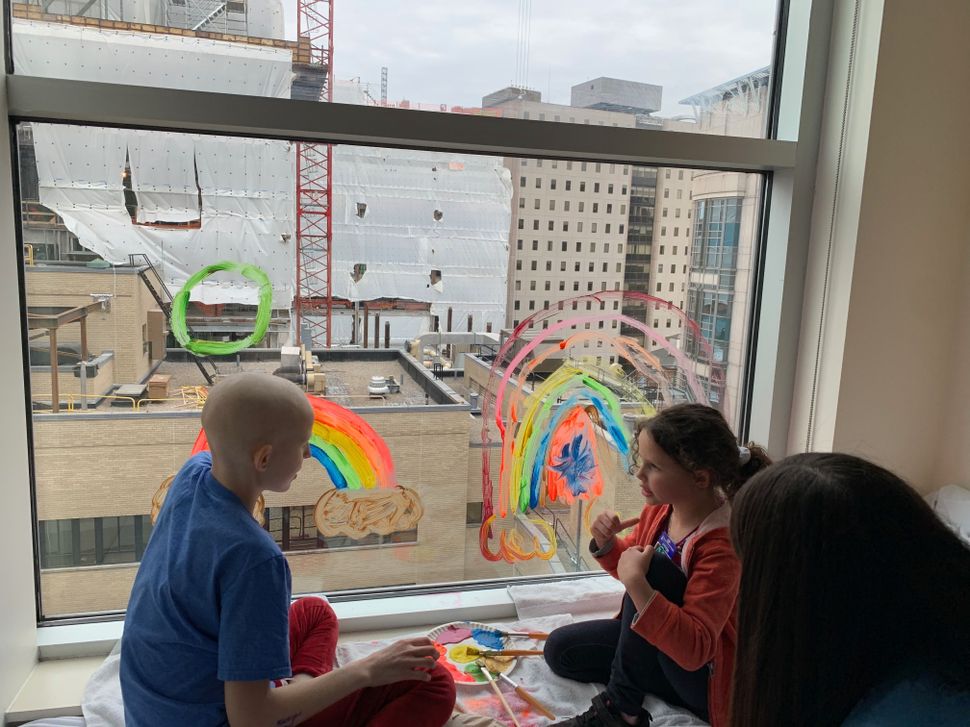 Orli’s sister Hana visits her in the hospital the week following her liver transplant. Image by Photo by Sarah Wildman

On the Friday after my daughter, Orli, received a new liver, in a new city, a doctor appeared in the doorway bearing a small sack. He was, it turned out, the husband of one my 8th grade Camp Ramah counselors—and also the head of the medical ICU. In the bag was… Shabbat, a vegetarian soup, a chicken dinner, sides, challah, and LED candles. The following week, we were no longer in the ICU, but on the transplant ward, when he appeared again, this time with a larger bag containing Shabbat dinner for four. Orli was, by then, awake and eating. She had requested we create a real Shabbat. Now we could.

As the world faces the coronavirus crisis, acts of kindness have been called “disaster altruism.” People dust off old sewing machines and create masks for first responders and neighbors. Donations of PPE pour in to help ER teams. Meals are made for the homebound and dropped off without contact. But for us, a family who navigated a medical crisis well before the country faced its own, and endured a form of social distancing for the many months Orli has fought the cancer that encompassed her liver, I call it something else: radical kindness.

We saw this form of ultra-altruism, this radical selfless kindness, over and over at our home in Washington, D.C.

It is the sort of kindness that comes from a friend who not only shows up again and again with bags of groceries, but who texts you, from the store, insisting you send a list. It is the person who arrives with the waffle that a kid who hasn’t been able to eat in a week craves. It is the time given by those who have shown up for hospital shifts, or come, unasked, to quietly fumigate our rotting, abandoned, refrigerator. It is the weekly wellness check in that requires no response. It was the legwork done by an airline executive to reserve and secure flights, if we needed them, to get between cities quickly. And it is the effort made by the people who carefully pack up your life in Washington and send it, piece by piece, to the city you temporarily live in. It is a kindness that becomes like air, essential. You can’t imagine the fear that would exist were it to disappear, nor can you ask for it.

But in Washington, we had community. In Boston, where Orli found a match for a liver, we had none. We dreaded facing the ordeal alone, in a lonely Air BnB, in a new city. And yet, immediately, we experienced that same sort of radical kindness.

Not long after our arrival at Boston Children’s Hospital, an old friend I hadn’t seen in years turned up – three times – bearing bags of home-cooked meals (spanakopita and chocolate chip cookies, chicken pot pie and black sesame dotted bourekas) and some basic essentials (Olive oil! Chocolate!). We heard again and again that Boston shuls were communicating to their members our story: a family, displaced for an essential organ, seeking accommodations and help navigating the city. We had offers of playdates for Orli’s six-year-old sister Hana and offers of Shabbat meals. We had offers of a space for Hana to attend school, if she didn’t return home, and we had offers of homes to live in. Empty nesters had extra bedrooms. One even had a home with a car we could use.

And then the virus hit.

Gone was our ability to go on playdates, gone was the chance of school, gone was our chance to live with other families. But the radical kindness remained.

The woman who had offered us a place to live, and a car to use, no longer had a place for us. Her kids were now home from college after all, and we were now in isolation. But when we showed up at the Butcherie, Brookline’s kosher emporium, with a large call-in order for pick up, set to stock up the apartment we ended up renting a mile from the hospital, we discovered she had paid for all of it. She waved away our protests, saying only that had we been here at any other moment, in any other year, we would have been hosted again and again for Shabbat, playdates, and meals. (We have still yet to meet her.) The kindness of that gesture helped staunch the profound loneliness of this experience – the double isolation of the Covid-19 crisis and Orli’s transplant. 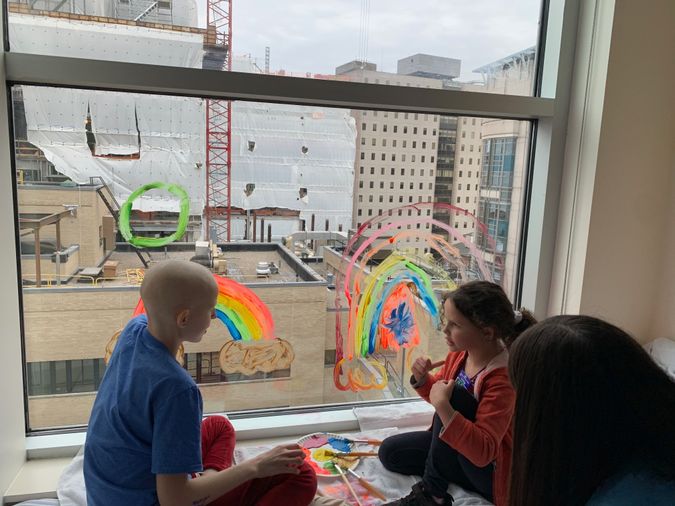 Orli’s sister Hana visits her in the hospital the week following her liver transplant. Image by Photo by Sarah Wildman

Even our endless extra weeks in Boston were buoyed by altruistic donors of another sort, from our shul in Washington, Adas Israel. Two people sponsored the apartments we rented, sequentially, during Orli’s initial post-surgical convalescence.

We have encountered radical kindness in the most breathtaking form as well: in all those who were screened as potential live-liver donors for Orli. People who offered to put their own lives on hold for an 11-year-old girl in desperate need. People who sat down with partners and wives, husbands and children, to say they would take four to six weeks off, to give life to a child.

We are so grateful for all of it.

But it is not always easy to receive such largesse. It can be exhausting to need so much.

Early on in Orli’s liver cancer ordeal, her younger sister Hana articulated the discomfort. We were, by then, receiving meals every few days from members of their school and synagogue community. “I want to be a helper,” she said one night, “not be the helped,”

I understood her. I’ve worried about the same. But one of my rabbis, Elianna Yolkut, recently shared something that helped me shoulder the fear of our need, as large as it is. “I have been for a number of years been firmly rooted in the idea that _chesed,” she wrote on Facebook, using the Hebrew word for kindness, “is the most important lived concept Judaism offers us. It is meant to sustain us when we are struggling, guide us when we are lost, elevate us even higher when we are joyful. It roots us to our highest selves, to others, and to the Holy One.”

Having experienced such radical kindness, such selfless giving, we’ve been given a window into not just what we can receive, but of what we too are capable. The thing is, I told Hana that night, we all get our turn.

Sarah Wildman is the author of Paper Love: Searching for the Girl My Grandfather Left Behind.