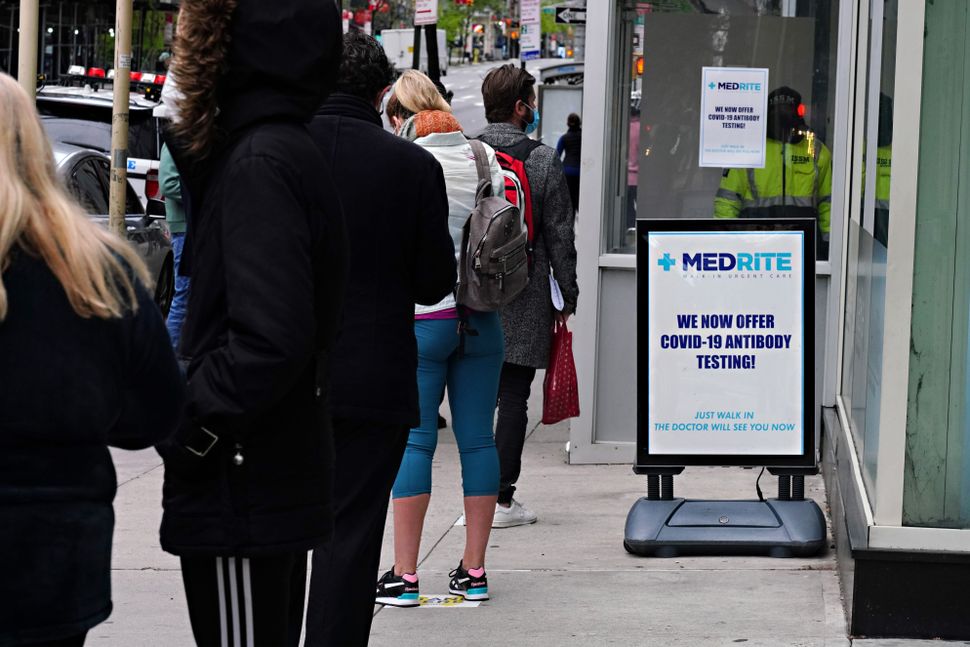 People line up outside MedRite Urgent Care which has recently started COVID-19 antibody testing during the coronavirus pandemic on April 27, 2020 in New York City. Image by Cindy Ord/Getty Images

The New York State Assembly is calling on city and state health departments and city hospitals to begin a program that would allow volunteers with coronavirus antibodies to visit COVID patients, according to a joint letter signed by assembly members and city council members Kalman Yeger and Chaim Deutsch.

“We propose that your hospitals create new Compassionate Helper Volunteer Programs to connect families with their loved ones while they are hospitalized,” said the letter. “This program will identify individuals who have survived COVID19, possess antibodies and who seek to volunteer to sit with hospitalized COVID19 patients.

One man, social worker Mordechai Neuman, shared a story that spread on Twitter about how he was unable to reach his mother in her last moments at a New York hospital.

“Survival could not be expected just by pumping meds,” he wrote. “Hopefulness and emotional wellbeing plays as large a role as medical interventions.”

“Let’s find a way for patients in hospitals to get the emotional support they are now missing because of restrictions on family visits,” said City Councilmember Mark Levine in a tweet about the volunteer program. “This is important to all NYers, and has been a top priority of the Jewish community,” he said, referring to Orthodox Jews.

The letter calls for the New York State and New York City health departments to “embark on an immediate testing program” to “verify COVID19 antibodies.”

The letter says the volunteers can read or play music for patients or sit “quietly offering a caring presence to the patient.”

As of Monday, the World Health Organization said scientists don’t know if an antibody response means that a person is immune to the virus.

On Monday, New York State Governor Cuomo announced that 14.9 percent of the population has COVID-19 antibodies, according to a testing survey.

The New York City Department of Health did not immediately respond to a request for comment.