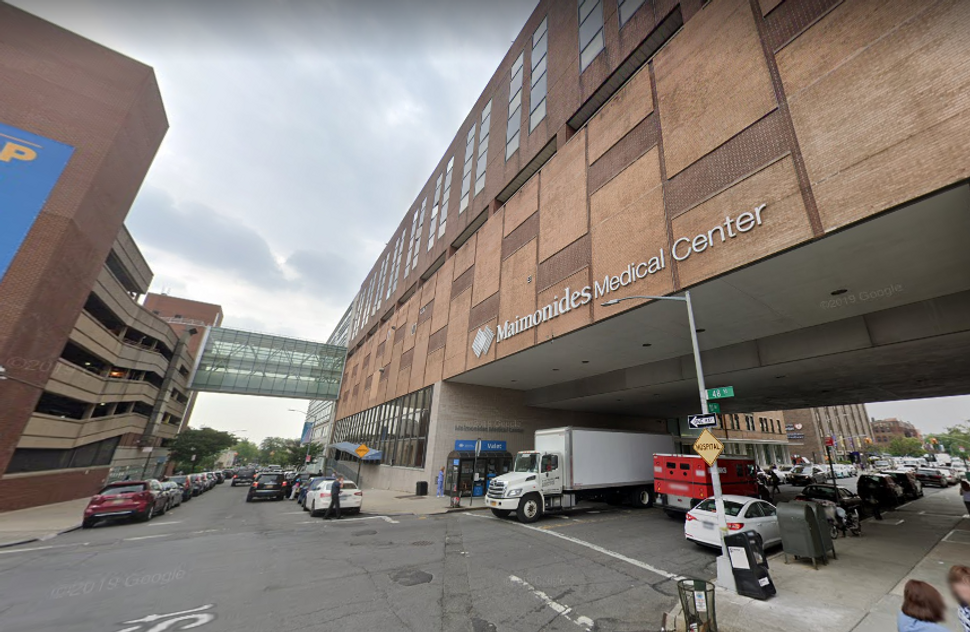 Brooklyn’s biggest hospital has made concessions to the Orthodox community in its neighborhood by allowing for broader and longer use of ventilators amid the coronavirus crisis, in contrast with other New York City hospitals who might increasingly need to start deciding who gets a ventilator and who doesn’t due to the combination of more patients and equipment shortages.

The Orthodox ambulance service Hatzolah has resolved, at least for now, the conflict between Maimonides Medical Center in Borough Park and Jewish patients. Hatzolah transferred at least 50 ventilators to the hospital — with conditions, according to an audio recording provided to the Forward.

In the recording, Chasky Rosenberg, a paramedic with the service, said the hospital had agreed to put on a respirator every single patient regardless of age, or whether they have more than one chronic condition. Also, the hospital had agreed not to take patients off ventilators without consulting families. He did not respond to requests for comment.

“Maimonides has committed to us that as long as they have the equipment, they will intubate every single patient,” he said, using the medical term for inserting a tube into the airway, which is needed to connect a patient to a ventilator.

The patients had complained that the hospital’s apparent removal of patients from ventilators was not in line with their religious traditions, which prioritize the sanctity of life over the quality of life.

The disagreement reflects broader debates about triage, supplies and medical ethics across the city and the country precipitated by coronavirus and, especially, the shortage of ventilators needed by those most seriously ill with the disease. Even as Maimonides puts more patients on its new ventilators, other hospitals in New York City are already “informally” using protocols that call for doctors to refrain from resuscitating coronavirus patients who stop breathing, according to the Washington Post. New York City has by far the country’s highest rate of coronavirus infection as reported to the CDC, with almost 46,000 cases about a quarter of the national total(186,101) of 186,000.

Maimonides has to strike an especially difficult balance — attending to a Jewish community with particular religious needs while taking every necessary step to save more lives. That community also relies heavily on Hatzolah, the private ambulance service, and is also sometimes distrustful of mainstream medical professionals. And, according to images, videos and testimonials from staff at funeral homes and Jewish burial societies, tightly-knit Orthodox communities appear to be hard-hit by the virus.

“If chas veshalom anyone needs emergency care they should call a private ambulance (most take insurance) and go to a different hospital,” rather than Maimonides, said one message sent to the Forward. Other messages purported to schedule a protest on Thursday afternoon against the hospital, which would defy social distancing rules meant to prevent the spread of coronavirus.

According to some scholars, the ventilator takes over a vital bodily function, and removing it can be seen as withdrawing treatment, a decision that hastens death. Once a patient is using a ventilator, many families do not want it removed.

But for now, Maimonides seems to have enough ventilators.

Hatzolah, according to the voice note, has been working with Kenneth Gibbs, president and CEO of Maimonides Medical Center and Dr. John Marshall, chair of emergency medicine, to make these changes.

Other changes may already be in the making, however. Gov. Andrew Cuomo said on Monday that the state was going to try to start operating all of its hospitals as one system, which might mean more standardization of such protocols. And doctors are asking the state for more discretion over treatment decisions, including who gets a ventilator, the New York Times reported.

Maimonides’ communications office did not respond to a request for comment.