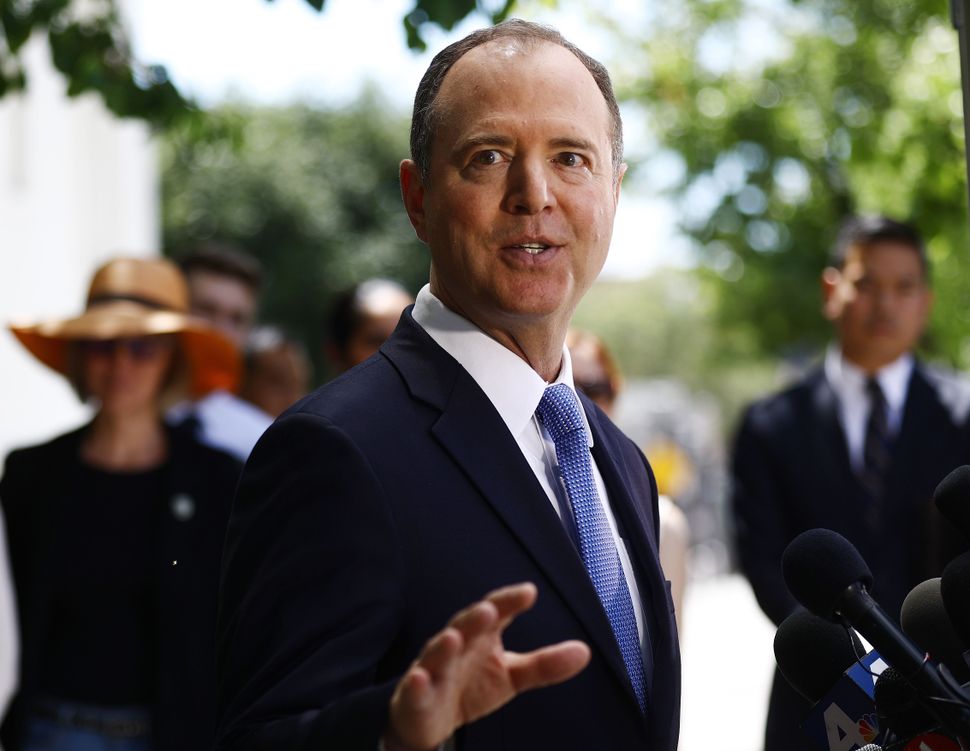 Through much of the late fall and early winter, Representative Adam Schiff, a California Democrat, was a daily presence in the national conscience. Beloved by Democrats, cursed by Republicans, he was must-see-TV, leading the House impeachment hearings of President Trump, then arguing for his removal as lead prosecutor in the Senate trial.

Not long after the president was acquitted on Feb. 5, the coronavirus took over the news, and memories of the national ordeal over Ukraine and Russian interference in the 2016 election seemed to fade behind unrelenting reports of illness, death and a moribund economy. Like other members of Congress, Mr. Schiff was gone from view.

It bears noting, however, that Mr. Schiff never went very far. For the 10th-term Democrat who represents communities in and around Los Angeles, including Hollywood, Glendale, and his home town of Burbank, the transition from Ukraine to viral pandemic wasn’t a transition at all. In his view, the Trump administration’s management of the coronavirus underscored the overarching theme of his concluding remarks in the Senate trial: In essence, he argued then, if the president were not removed from office, he was unbound. “You cannot constrain him,” he told the senators. “He is who he is.”

“It haunts me now,” Mr. Schiff said this week from his home in Washington. “How much damage could he do? There’s no question how much damage he could do. A lot, with lives lost now approaching the grim threshold of those lost in Viet Nam” — well over 50,000. “His poor handling of this has caused untold suffering through his compulsive fixation on himself and politics over the national interest. That’s exactly what we saw in his Ukraine misconduct and what led to his impeachment in the House.”

As chairman of the House intelligence committee, Mr. Schiff spends most of the national shutdown time in Washington, where he receives briefings on matters of national security and pushes for “a deep dive,” as he called it, into how the intelligence committee responded to the pandemic and and how it might do better the next time. He also serves as a proxy voter for House Democrats unable to make it back to Washington.

For now, his Washington home also remains headquarters for his family and constituent work, aspects of his life more common to Burbank. In recent weeks, he has held town hall-style meetings and other events over Zoom, with the next scheduled for Friday night, a “Shabbat Table Talk” with members of Kol Ami, a reform congregation in West Hollywood.

In other virtual events he met with employees of the Chateau Marmont hotel on Sunset Boulevard, the NASA Jet Propulsion Laboratory in Pasadena and health experts from UCLA, Cedars-Sinai Medical Center and the Los Angeles County Public Health Department.

He spent Passover in the Capital, celebrating a first-night Seder with his wife, Eve; his children, Alexa and Elijah, and Alexa’s boyfriend, whom she met six years ago at a summer camp program in Israel.

Politically, little has changed for Mr. Schiff since the impeachment trial. He remains a staunch critic of the Trump administration and a favorite target of it, along with the president’s supporters and conservative media: Does “Shifty Schiff” ring a bell? How about “Pencil-Neck Adam Schiff?” 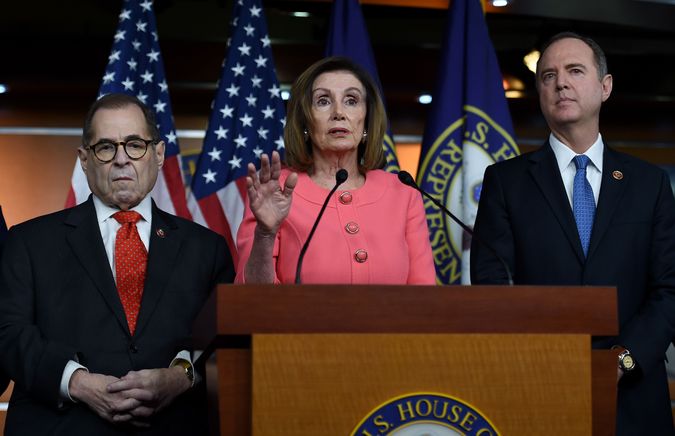 Nancy Pelosi, flanked by Jerrold Nadler and Adam Schiff, announcing the impeachment managers who will prosecute the case in the Senate. Image by Getty

In recent weeks, he has called for a 9-11 style independent commission with subpoena power to examine the administration’s handling of the coronavirus crisis and has argued for more testing before the country can open up without inviting more illness and death. He pushed to include relief for freelancers and gig-workers in the $2 trillion CARES Act that President Trump signed on March 27. And he has imploried him to stop blaming China, the World Health Organization and U.S. governors for the spread of the virus.

On other matters, he has accused the administration of denying Congress information on Russian efforts to disrupt the 2020 elections and called for an explanation of the administration’s purging of agency inspectors general, including Michael Atkinson of the intelligence community.

None of which has endeared him to Trump and his fans. Still angry over his role in the impeachment, they regard him variously as “a liar,” “a wack job,” “a total imbecile” and much worse. They have accused him of trying to protect witnesses in the Mueller investigation by delaying the release of testimony transcripts. Some critics have questioned his patriotism and charged that as intelligence committee chairman, he should have done more to stop the pandemic in the United States.

The Trump 2020 campaign recently tweeted a drawing of Mr. Schiff’s face with a red clown nose.

“I’m a useful fundraising tool for them,” he said. “As long as that’s the case, they’ll continue to attack me. I think I’ve managed to get inside the president’s head.” He paused. “That’s very scary to me.”

For the near future, Mr. Schiff said he intends to remain in Washington, focused on issues related to the coronavirus, efforts to interfere in the November elections and any commingling of the two.

“The Russians are not stopping,” he said, a reference to election meddling. “And I’m deeply concerned about using the pandemic issue to exploit the campaign in the Fall. The months ahead, Mr. Schiff said, “are rife for manipulation.”

Michael Janofsky is a former correspondent for The New York Times, now working as a writer and editor in Los Angeles.