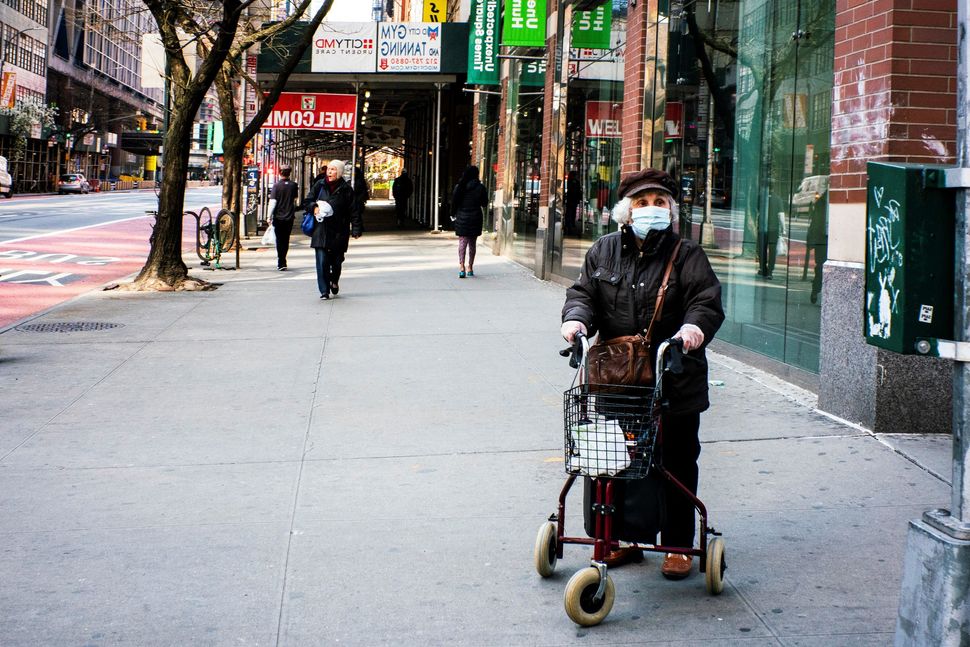 An elderly woman wears a face mask and plastic gloves as she waits to cross the street due on March 26, 2020 in New York City. Image by Eduardo Munoz Alvarez/Getty Images

Parker Jewish Institute for Health Care and Rehabilitation in Queens is the nursing home with the highest number of COVID deaths in the state, according to data released from the Department of Health Monday.

The institute, which receives funding from the Jewish Communal Fund and UJA-Federation of New York, has had 71 COVID deaths since the beginning of March in its facilities.

“We deeply mourn the loss of all those in our Parker Community who have been taken by this virus, many have called Parker their home for many years,” said a spokeswoman, Lina Scacco in a written statement. Staff “are doing everything possible to prevent further infections and loss of life, including testing of all symptomatic and asymptomatic patients and residents to detect and isolate any future cases.”

Parker offers long-term care, short-term rehabilitation and medical house calls. Despite the word “Jewish” in its name, its website mentions no kosher meal options or Shabbat services. It does, however, mention an Indian cultural inpatient unit.

Scacco said the seemingly high number of COVID deaths at its facilities could be attributed to its early testing capacity, its size and the way it reported COVID deaths. Staff started testing patients in March, before some other nursing homes, and Parker made a decision “to classify any death where the resident or patient was COVID-19 positive as a COVID death, even if the more proximate cause of death appeared to be comorbidity, such as heart-failure or an advanced disease state.”

The nonprofit has 499 residents and 527 certified beds; that makes it one of the largest nursing homes in the country. The national average number of certified beds is 106, according to the CDC.

Medicare inspectors have found four deficiencies since 2016 at the nursing home, all relatively mild, according to inspection reports. They included loose handrails in hallways and failure to provide a splint device to a patient despite a doctor’s order. At least 7,000 people nationally “living in or connected to nursing homes” have died of coronavirus, according to the New York Times.

A Parker employee told the Daily Beast employees were wearing trash bags earlier on in the outbreak due to a lack of adequate protective equipment.

In New York, the total number of nursing home deaths in the state was 4,813 as of Monday, about 25% of the state’s COVID deaths.

The numbers released by the Department of Health this week illustrate that New York State’s COVID death toll at some of its 618 nursing homes and adult care facilities is significantly higher than previously known.

There were 1,600 previously-undisclosed deaths this week, and the current data only includes individuals who died at elderly care facilities, and not those who were transported to the hospital and died there.

Nine New York nursing homes with the word “Jewish,” “Hebrew,” “menorah” or “Beth Abraham” in their name saw a total of 289 confirmed COVID deaths or deaths of residents who were presumed to have the virus. Among them were Rosa Coplon Jewish Home and Infirmary in Erie County, The New Jewish Home in Manhattan, Gurwin Jewish Nursing and Rehabilitation Center in Suffolk County, Hebrew Home for the Aged in Riverdale and United Hebrew Geriatric Center in Westchester.

Many of these organizations historically served Jewish residents and now work with a broader and more diverse population.

American Jews are older on average than the rest of the country, according to a study out of Brandeis University that found that 26% of the community in the continental U.S. is 65 or older, compared to about 20% of the general population.