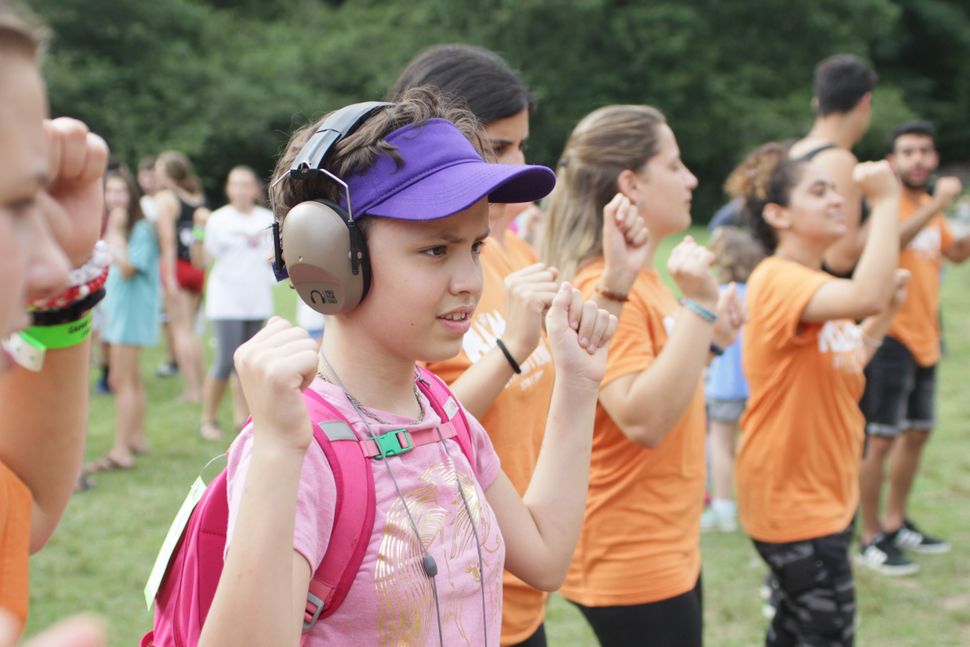 Stacie Funk is afraid to tell her son that there might not be summer camp this year.

Jonah, 21, has severe autism. Funk playfully calls him “one and done”: He’ll talk incessantly about a movie he wants to see, for example, and as soon as he sees it, he never mentions it again. But for 10 years, going to Camp Ramah in California, in Ojai, is the only thing Jonah has wanted to do every year, without fail.

He is 6’5” — his smile is bigger than everyone else’s. But over the last two months, shaken out of the routine he relies on to stay happy and focused — school, library, hikes, movie theater — he’s reverted to behaviors his family thought they’d moved past. He yells, paces, doesn’t listen, hits himself. The toll on Jonah, Funk and the rest of their family is immense. Perhaps sensing the uncertainty about whether he can return to his favorite place, Jonah has taken to repeating, hundreds of times a day, “I am going to Camp Ramah this summer in 2020.”

“We’ve held it together as long as we can,” Funk said. “We’re now crumbling.”

The pandemic has taken nearly 73,000 lives. It has taken livelihoods, disrupted school, separated families and is now poised to cancel Jewish summer camp. It’s a loss for thousands of families, and it cuts especially deep for those with children with disabilities. Those families rely on camp to give their kids a classic Jewish childhood experience that fits their needs, and to give parents a chance to recharge. Now the parents, already exhausted by the toll of the pandemic, are agonizing about how to break the news of a camp-less summer.

“Kids need camp this summer more than they ever have in their life,” Funk said. “And for special needs kids it’s that 1,000 times over.” 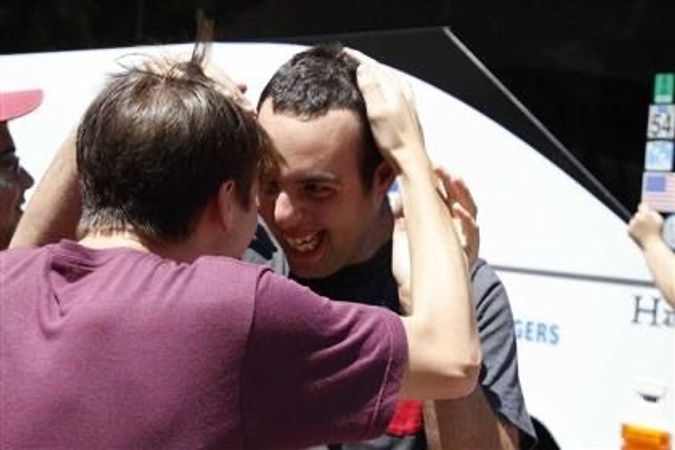 Jonah Funk coming off the bus on the first day of camp in summer 2019. Image by Courtesy of Stacie Funk

There are about 164 overnight Jewish summer camps in the U.S., including 100 camps with programs for children with disabilities serving more than 3,700 campers. That’s about 5% of all Jewish campers, according to a 2019 survey by the Foundation for Jewish Camp.

While it’s not clear how many camps have closed, the closure of camps in the Reform movement alone, which is the largest denomination of American Judaism and operates 15 camps, means 10,000 campers — 600 with disabilities — won’t have the summer they wanted.

Forty years ago, there were only a handful of programs for teenagers with special needs at Jewish sleepaway camps. Now there are dozens, where children with special needs and disabilities often grow in ways that they can’t at home, experts say. Some programs have semi-separate schedules, with specialized classes to learn social skills. Others use a “full inclusion” model: kids with disabilities do just about everything that kids without disabilities do. There are even vocational programs, which teach job skills and independent living, and which support participants who continue to mature and develop socially well into adulthood.

But the main classroom is the camp itself, where campers with disabilities learn to get ready for the day by themselves, eat as a cabin, take leadership roles in programs and make friends.

The main draw, many parents say, is the moments when their children — who may be used to leading parallel but separate lives from peers at school who do not have disabilities — get to participate in camp-wide events like prayer services, sports games, color wars, talent shows and plays.

“Camp is really the ultimate environment” for inclusion in the Jewish world, said Howard Blas, the director of the Ramah network’s Tikvah programs for children with special needs.

Gail Heyman sends her 39-year-old son Scott to a vocational program at Camp Barney in Marietta, Ga., which is run by the Atlanta JCC, each June. He works in the dining hall, setting tables, serving food and cleaning. She said that Scott, who has Fragile X syndrome, “grows exponentially every summer socially and emotionally.” 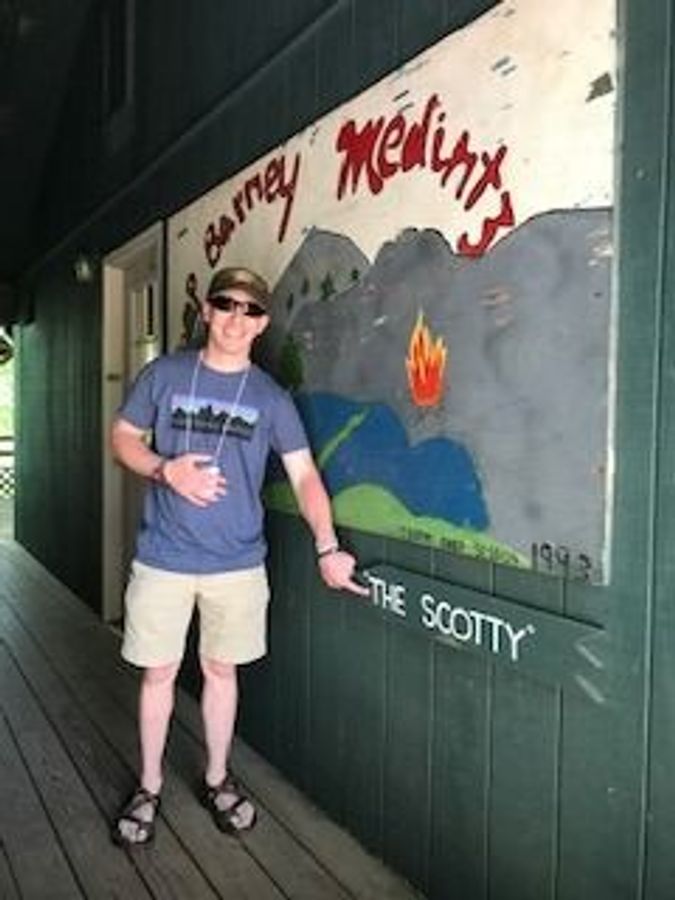 Even though Scott has been going to Camp Barney for 27 years, and plans to be there next summer, he said in an interview that he took the news that it would close this year really hard.

“I was shattered,” he said.

‘Strength for the entire year’

The parents and siblings of the special needs campers also value camp — for them, it’s breathing space. In social services, it is referred to as “respite.” It’s a chance for parents to relax their rule-bound lives, deviate from the strict schedules that children with disabilities might need to thrive and lavish attention on their other children.

And after months of stay-at-home orders, it’s especially needed now. Special needs families are struggling. Distance learning, by and large, is not working. The kids can’t meet in person with occupational, speech or physical therapists, and parents — who are balancing jobs and household duties — are not trained to fill their shoes.

“It’s just nice for my husband and I to have a reset,” said Amy Kales, who sends her three kids, who have a range of needs, to three different camps — all of which have closed. “It’s a luxury, but it’s great to go out to dinner and eat whatever we want, and not worry about who needs what.”

This reporter learned about respite firsthand, working as a staff member for four exhilarating summers in Camp Ramah in Wisconsin’s special needs programs. One of the first lessons I learned was that, while we go into the summer with earnest goals for each camper, if all we can accomplish is providing respite for the family, it will have been enough.

“It gives them strength for the entire year,” said Judah Mischel, the director of Camp HASC, an Orthodox camp that usually enrolls about 350 children with a range of special needs.

The camps that have not yet declared themselves closed say they still hope to welcome campers this summer, and to provide that respite to families. Some Ramah camps have moved back their start date, or, like Ramah in California, where Jonah goes, have made no announcements yet.

Mischel, director of Camp HASC, said as of now they are hoping to open in some fashion — perhaps only on weekends, or only for campers who are not immunocompromised — but only in a way that will comply with state rules and health expert recommendations.

“But there’s no question that for this summer specifically our goal is to provide as much respite as we can,” Mischel said. “It’s an emergency situation.”

The Reform movement’s Camp Harlam and Ramah Darom in Georgia, which have both closed, have sent out surveys to parents of children with disabilities to ask what their needs are.

“That’s really the piece we need to figure out this summer: how can we continue to facilitate the amazing inclusion we do at camp, online,” said Dr. Audra Kaplan, Darom’s director of camper care and of its Tikvah support program.

Losing camp has also put parents in the position of having to explain to their children that the pandemic has taken yet another piece of normal life.

Kales sends her oldest, 16-year-old Jack, to Camp Harlam, in Pennsylvania, where he is one of about 120 kids participating in their inclusion program, out of 800 total campers. When she broke the news that Harlam was closed for this year, he was devastated. He was looking forward to playing and talking about sports — and being tucked in each night by his bunkmates, who do not have disabilities.

“Maybe next year,” Jack, who has an intellectual disability resulting from a birth injury, said in an interview. But Kales isn’t sure of that: This summer was supposed to be Jack’s last as a camper. 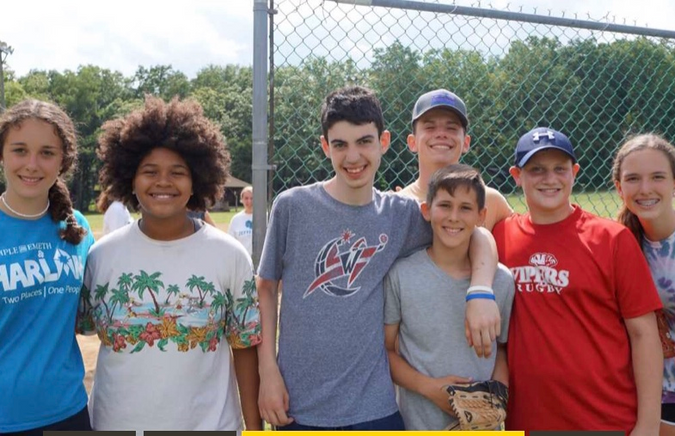 Jack, center, with his bunkmates in summer 2019. Image by Courtesy of Amy Kales

With time left before the summer, parents like Stacie Funk, and campers like her son Jonah, are still holding out hope. She says she’ll take camp in whatever form Ramah can offer it, but has decided not to tell Jonah that there is a possibility camp won’t happen at all. She says she does not know how he’ll react.

“I can explain that he isn’t having a graduation,” she said. “I can get people on Zoom and have balloons and have a pretend ceremony. I can’t replace Camp Ramah. There is no substitute.”

For this story, I wanted to ask Jonah directly how he would feel if there was no camp this year, but I left it to Funk to determine the questions. I was concerned that by introducing the notion that camp might not happen, I would undermine his mom, and give him something new and upsetting to perseverate on.

Funk asked Jonah his favorite things about camp: ceramics, jewelry making, singing prayers with his friends, zip line. She finally asked him, what if there was no camp this year?

He changed the subject several times, before saying he would feel sad, and miss his friends. He soon went back to his standby, his hope: “I am going to Camp Ramah this summer in 2020.”