As a counselor for kids with disabilities, I learned just how important summer camp can be 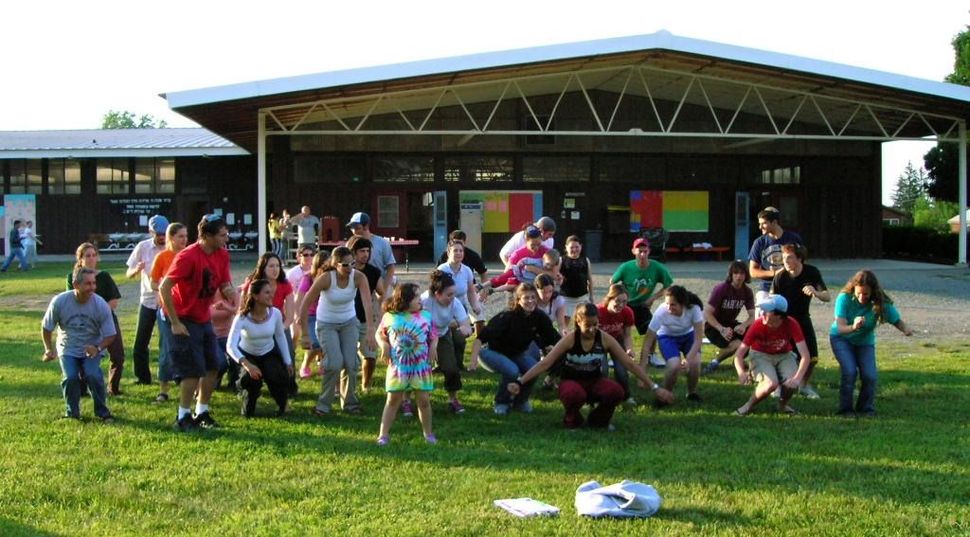 There we were, on the third day of camp in summer 2012, trying to get the bunk ready for Shabbat: me, unprepared for what was happening in skin-tight khakis and boat shoes; my friend David, a muscle-bound future Marine; a former Israeli special-forces soldier from the cabin next door whose name escapes me now; and N., a 14-year-old with deadlift and bench-press records in his home state, who was having a meltdown.

I was 18 years old; it was my third day as a counselor for children with disabilities, in the awkwardly but earnestly named Tikvah (Hebrew for “hope”) program at Camp Ramah in Wisconsin. It was a job I’d been hoping to get for years. I spent six summers as a camper at Ramah, during the last two of which I had participated in partnership and internship programs with Tikvah. But on that first Friday evening, I worried I’d already blown it. 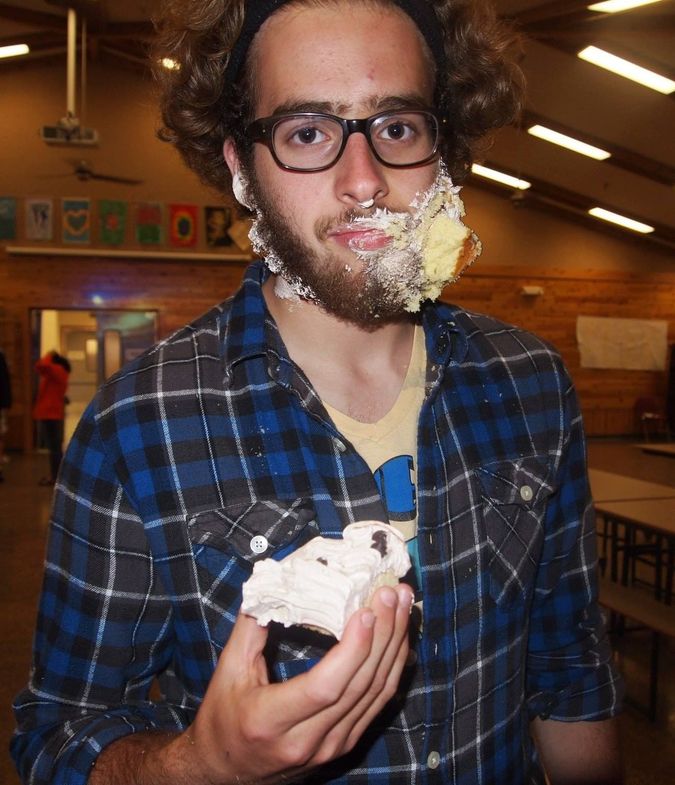 A picture of the author as a junior counselor with cake on his face. Image by Ari Feldman

I wasn’t a perfect counselor, especially that first summer of what would become my four years in that job. I struggled with sharing responsibilities I felt I could shoulder on my own; I was defensive in the face of constructive criticism; I lost my cool a few times. But I put my whole heart into the work because I loved my campers’ goofy senses of humor, their constant striving to deepen their friendships, their courage to learn to swim, go camping, get up on stage in front of the whole camp.

As many Jewish camps have announced cancellations because of coronavirus, I’ve been thinking about how difficult this summer is going to be for Tikvah families and others like them — and about that first time I was truly in over my head. That one moment with N. — I’m using just his first initial to protect his privacy — crystallized both the challenge and the promise of summer camp for kids with disabilities, and the hope these families have already lost this year for a little growth and a little peace.

At Ramah, a landscaped Eden of Jewish culture cleared out among Wisconsin’s old-growth Northwoods, the season’s first Friday-night services are a pageant. We wait 10 months to sing Kabbalat Shabbat on the lawn by the lake as the sun goes down behind us; we wear sandals so we can pray barefoot in the cool grass. Campers dress in their adolescent finery from Hollister and Urban Outfitters; young counselors loudly corral kids onto the rainbow-painted benches, showing off their newfound authority to one another.

I was a 30-second walk from this joyous scene, but a world away, stress-wise. 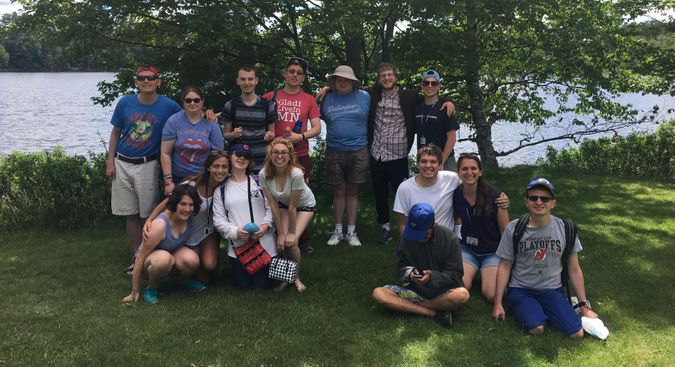 Some of the participants I worked with at Camp Ramah in Wisconsin’s Atzmayim (independent ones) program, which teaches independent living
and vocational skills, for participants aged 18 to 23. Image by Ralph Schwartz

Though N. was a young 14, and new to Ramah, we put him in my cabin with the older kids because he met the age threshold. Her certainly looked the part: slightly shorter than me at 5’9”, and I wasn’t kidding about the weightlifting.

N. was a quiet goofball; he later connected with the more puckish kids in the younger Tikvah cabin, the ones spending hours arguing about the relative merits of different Pokemon. But he was also prone to intense meltdowns in certain conditions: if he was hungry, thirsty, tired — or was confronted with nudity in the cabin.

While the boys were showering that first Friday evening, N. began whimpering and crying. I volunteered to wait out the meltdown with him. But even after my co-counselors took the others to services, his distress continued to escalate. He wailed at tornado-siren levels, tipped over his bed and threw everything that was on a shelf in his corner of the cabin onto the floor, or at me, David the future Marine and the former Israeli soldier.

N. showed no signs of stopping. I tried approaching him — did he want a hug? — and the yelling got louder. I felt David tug on my shirt: “Give him some space. Don’t make him feel cornered.” The Israeli nodded.

I was soon relieved by my senior counselor, Jeremy Drazner, who after learning from another staffer how much worse things had gotten, sprinted back to the cabin — something he recently told me he was not wont to do, as a large former defensive lineman on his high-school football team.

Jeremy took N. to the infirmary, where he calmed down temporarily after being given a light sedative. But he later reversed course, and he wriggled out of the collective grip of Jeremy, our program director and the camp photographer — three of the biggest people at camp — and walked right out of the parking lot and halfway to Bauer’s Dam, the beloved staff watering hole two miles away. Eventually he tired himself out, and was driven via golf cart back to the cabin, where he slept for 14 hours.

Kids are just as impacted by the quarantine as adults. We want to hear from them. Send short videos about your quarantine experience to photos@forward.com.

Meanwhile, I had avoided the physical exertion Jeremy put in, but I was emotionally drained. “Is this what this job was like?” I remember thinking. I had had one week of formal training — how could I help this kid? It would prove to be only the first in a series of miserable meltdowns that N. would have over his four weeks at Ramah, some of which would include attempts to harm himself — without question the worst meltdowns I saw in my four summers with Tikvah.

During dinner, the long-time Tikvah program director, Ralph Schwartz, ushered me out of the dining hall and brought me to the secluded porch of the library building, overlooking placid Lake Buckatabon. Ralph is a guru of tough love and practical empathy, a battle-hardened special-education veteran. He had recently returned from following N. to Bauer’s, but put off eating to talk with me. We slumped into the wooden deck chairs.

I told him how unequipped I felt to care for N. Ralph listened, then explained one of his core philosophies, the hidden mission of the Tikvah program: respite for the parents.

You can’t always make progress with the campers, he said. Maybe they’re not ready to mature socially, or there are intractable behavioral problems that require specialized attention from psychiatrists — or, in N.’s case, camp is just too new of an experience.

Still, you are giving parents a break — for two weeks, a month, two months — and that is a gift the value of which we, as counselors doing this job one summer at a time, cannot fathom. Parents can recharge, spend more time with their other children, take a break from the nonstop and exhausting duties of parenting a child with a disability.

This was a meltdown that we had handled — just barely — so N’s parents could do anything else. I like to think that while Jeremy and Ralph were getting licked outside the infirmary, N.’s parents were sitting on their deck, sipping wine in the breezy summer evening.

I remembered N.’s story, and the lesson Ralph imparted, as being an example of a consolation prize: We couldn’t help him in that moment, but we certainly gave his parents a break. But when I called Jeremy last week to talk it through, he reminded me of a pretty crucial piece of the narrative: N. had a successful summer. He made friends and participated in programs; he was a Tikvah captain for campwide color wars.

“When you think of stuff like that, it wasn’t a total waste,” Jeremy said. “He had a full camp experience, it just wasn’t the camp experience we thought he was gonna have, and that’s totally O.K.”

I felt the relief of having a painful memory revised for the better, but also newly disheartened: With no camp this summer, families have little chance for respite, and even less chance to see their children flourish against the odds.

As a counselor for kids with disabilities, I learned just how important summer camp can be