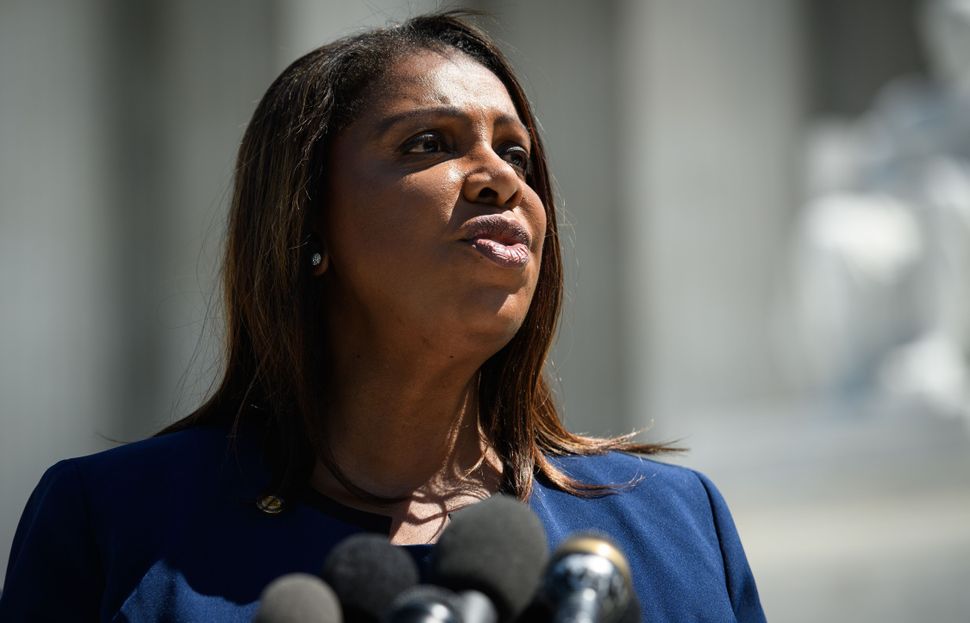 New York Attorney General Letitia James speaks to reporters outside of the US Supreme Court in Washington, DC on April 23, 2019 Image by MANDEL NGAN/AFP via Getty Images

New York State Attorney General Letitia James announced on Wednesday that she is looking into reports of unequal enforcement by the New York Police Department of social-distancing requirements due to coronavirus.

In a May 8 letter to the police commissioner, James requested department policies and directives for enforcing the social-distancing rules, as well as the department’s demographics on race, precinct and age of arrestees. She has asked for the records to be delivered by this Friday, according to the letter, which was referenced in a press release her office issued Wednesday.

“It is inherently wrong to aggressively police one group of people, yet ignore another group that commits the same infraction,” said James in a statement. “The NYPD must better ensure that a New Yorker’s race, color, and neighborhood does not determine how they are patrolled.”

The demand for records comes after weeks of mounting debate across the Jewish community about the enforcement. It began with concern that visibly Orthodox Jews in Brooklyn were being unfairly targeted, helping fuel anti-Semitic accusations that they were responsible for spreading the virus. More recently, progressive Jewish groups have joined coalitions calling attention to blacks and Latinos being singled out for punishment.

James has otherwise championed Jewish civil rights in recent weeks, as she intervened in a housing discrimination case involving Jews in Orange County earlier this month.

The attorney general is the latest public official to raise questions about the equity of NYPD’s enforcement of social-distancing rules, and many have focused on claims of disparate enforcement in communities of color. The beginning of this month represented a turning point after a video surfaced of a violent social-distancing arrest in the East Village that involved an officer punching, dragging and kneeling on a black man.

The Brooklyn District Attorney’s Office released data soon after that showed 35 out of 40 people arrested for social-distancing violations in the borough were black. On Tuesday, the NYPD released long-sought data that showed black and Latino New Yorkers account for more than 90% of “COVID-19 related arrests” and more than 81%of the social-distancing enforcement summonses.

The issue of uneven enforcement has also been top of mind in New York’s Hasidic neighborhoods. After the city issued 12 summonses to mourners gathered in Williamsburg for the funeral of a Hasidic rabbi a few weeks ago, the Orthodox Jewish Public Affairs Council tweeted photos taken the same day of secular city residents crowding the city’s waterfront parks to watch the Blue Angels fly overhead, with no apparent consequences.

The photos attached to this tweet is of today in NYC. Where was @NYPDnews? Oops. It’s not Hasidim so there is no media and no tweets from you either. BTW there is no distancing at Domino Park in Williamsburg but @NYPD90Pct breaks up even funerals of just 15 Hasidim in Willi. pic.twitter.com/dNptnaYF00

Hasidic New Yorkers also cried foul after a Hasidic man was issued a ticket for not wearing a mask in Williamsburg only two days before the police department tweeted a photo of an officer politely handing a mask to a non-visibly-Jewish woman. The photo was captioned, “No mask? No problem.”’

The New York Jewish Agenda, a new progressive group that has been working with the African American Clergy and Elected Officials Organization on matters related to social-distancing enforcement, said in a statement they support James’ effort.

“Reports of disparate enforcement, especially in Brooklyn, are deeply troubling,” said Matt Nosanchuk, the group’s president. “Effective efforts to promote and enforce social distancing must avoid any social stigmatizing or selective enforcement,” he said, referring in part to the mayor’s singling out the Jewish community a few weeks ago.

Until last Friday, the only police data available had to be gathered by combing through individual daily tweets on the department’s account. Spokespeople would not even release summary data, so residents were left to add the statistics up on their own. There was no breakdown by precinct or race.

Now, the department has released data by gender, race, age and the city’s eight patrol boroughs, but not by its 77 precincts. The data clearly shows New Yorkers of color being more frequently targeted by summonses and arrests.

But legal experts and others have questioned the usefulness of analyzing the the arrest data, because the department’s definition of “COVID-19-related” is very broad and does not exclusively count arrests for social-distancing violations. A department news release says: “The crimes are characterized as COVID-19-related due to the circumstances of occurrence, remarks made by the arrestee at the time of the alleged crime or afterward, or statements made by a victim.”

And Rep. Adriano Espaillat (D-Manhattan) said the way communities of color are being treated during the pandemic is “horrendous.”

Thank you @NewYorkStateAG for this effort. The way communities of color are being treated during this pandemic is horrendous. We need NYPD community affairs officers who are trained to engage with residents to address #SocialDistancing within all communities. https://t.co/zAfZv83Y2p

This is not the first time James has reviewed NYPD activity on suspicion of discrimination. In January, she announced a probe into the department’s subway-fare evasion enforcement to see if those practices varied along lines of race or ethnicity.

She has also had an occasionally contentious relationship with New York Mayor Bill de Blasio, who has backed his police department amid questions of racial disparities

She also ridiculed de Blasio’s presidential run a year ago, criticizing his records on affordable housing, income inequality, equal pay and bicycle safety, among other issues.

But, James declined to participate in a march to protest the police killing of Eric Garner, an unarmed black man, and her cozy relationship with New York Gov. Andrew Cuomo has occasionally left her at odds with the state’s progressives.

She encouraged people who think they have been victims of discrimination or have other information relevant to the inquiry to contact the Civil Rights Bureau.