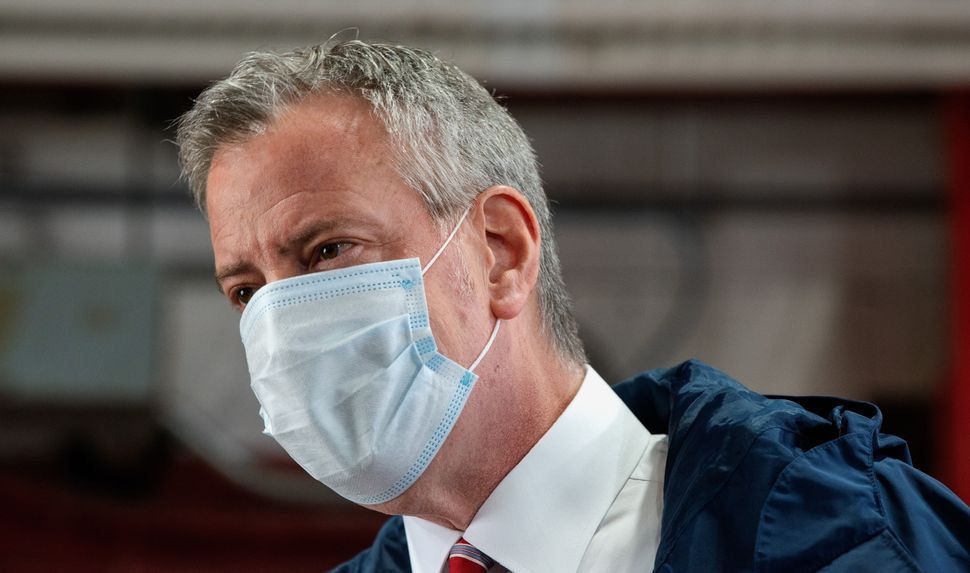 First he was accused of anti-Semitism for his crackdown on a Hasidic funeral last week in Williamsburg, Brooklyn. Days later he navigated claims of racism after the New York Police Department made violent arrests of young men of color for not following social distancing regulations. On Thursday night, the Brooklyn District Attorney’s office released data that showed 35 out of 40 people arrested in the borough for not socially distancing were black.

On Friday, New York Mayor Bill de Blasio announced restricted access to two parks, one of which is in Williamsburg — meaning he will surely have to continue to contend with the perception of inequities in enforcement that has tracked his coronavirus response.

The city will increase police presence and monitor for overcrowding at Domino Park in Williamsburg, de Blasio said, so that once the park hits capacity, visitors will have to wait to get in.

At the other park, Piers 45 and 46 at the Hudson River Park in Greenwich Village, police officers will also limit the number of people who can enter.

Complaints of uneven treatment of coronavirus restrictions have dogged the mayor since the very start of the pandemic, when local media revealed that de Blasio made his routine trip to the Prospect Park YMCA just hours after shuttering the city’s schools due to the virus March 16.

True or not, there is a very real feeling on the streets in Jewish neighborhoods that there is a double standard in enforcing social distancing and mask rules. At the park Sunday the only group of people watching police walk around were Jewish. (They had masks on, a lot didn’t)

But while rival politicians and longtime nemeses like the police union have hardly let up on their criticism of the mayor, recent weeks have seen outrage even from sectors of New York that had previously supported him.

The Jewish and African-American communities in particular have voiced concerns over a checkered public safety system that seems to give protective masks to white affluent hipsters, summonses to Hasidic Jews and severe injuries to people of color.

“A lot of it has to do with the inconsistent ways policing is being done,” Brooklyn Borough President Eric Adams, who is black, said in a video released Wednesday, speaking over photos of New York police officers and the Jewish public-safety group Shomrim aggressively breaking up a Hasidic funeral procession in Williamsburg, juxtaposed with images of police officers walking calmly by crowds of sunbathers. “The differences were in the geographies.”

A Jewish advocacy group went even further, saying the mayor “added fuel to the fire” of anti-Semitism by singling out the Williamsburg funeral. The group, called the Lawfare Project, has made a public records request for documents related to the NYPD’s deployment to Williamsburg, as well as data pertaining to 311 calls and any assignment of officers to predominantly Hasidic, Muslim, African-American and Latino neighborhoods during the outbreak.Their goal is to see whether the police department used different strategies for areas with different demographics.

The NYPD declined to provide the total number of summonses and arrests for coronavirus violations to date, but according to its Twitter account, the department has issued 39 summonses and made 12 arrests since Saturday.

The data from the Brooklyn District Attorney’s office shows that out of 40 people arrested for social distancing violations in Brooklyn between March 17 and May 4, 35 were black, four were Hispanic and one was white. The 73rd precinct, which serves a northeastern area of Brooklyn containing Brownsville and Ocean Hill, saw 16 arrests, the most in the borough. The D.A. declined prosecution in all 40 cases, according to a spokesman for the Brooklyn District Attorney’s office.

After the New York Times broke the story Thursday night, de Blasio tweeted, “The disparity in the numbers does NOT reflect our values. We HAVE TO do better and we WILL.”

The Brooklyn District Attorney, Eric Gonzalez, vowed to investigate the demographic details of arrests after videos of violent social-distancing confrontations in East New York and the East Village surfaced over the weekend.

De Blasio has promised to release data on city-wide social-distancing enforcement, which Public Advocate Jumaane Williams has been demanding for weeks. All of the people being confronted by officers in the videos are people of color.

“It is even more critical and urgent they address this selective enforcement against people and communities of more color,” Williams said in a statement Monday. “This inequity is made clear when some violating social distancing receive a mask while others receive a summons, when some are warned and others violently arrested.”

Look at all these Chasids refusing to social distance pic.twitter.com/7n1Hm86VLC

De Blasio insists that the police have been directed to enforce evenly across communities. But Patrick Lynch, president of the Police Benevolent Association, the union that represents the city’s roughly 24,000 officers, said in a statement that officers have been given “nothing but vague guidelines and mixed messages.”

After the city cracked down on thousands of mourners gathered in Williamsburg for the funeral of a Hasidic rabbi, the Orthodox Jewish Public Affairs Council tweeted photos taken the same day of secular city residents crowding the city’s waterfront parks to watch the Blue Angels fly overhead, with no apparent consequences.

De Blasio clapped back against complaints of a double standard in a press conference last week.

“Anyone who equates a small number of people around, you know, a blanket in a park with what we saw last night is entirely missing the point,” he said.

But the perception of uneven enforcement did not go away.

On April 30, a video of NYPD officers giving a Williamsburg Hasidic man a ticket for not wearing a mask went viral. Only two days later, the Department tweeted a photo of a police officer handing a white woman in a Williamsburg park a mask, rather than a ticket.

Young Man In Williamsburg Gets a Ticket For Not Wearing A Mask. pic.twitter.com/VxrjsY7EG6

No mask? No problem.

This park-goer in Domino Park didn’t have a mask, no problem, our task force officers were more than happy to provide her with one. pic.twitter.com/qgSo1li2VH