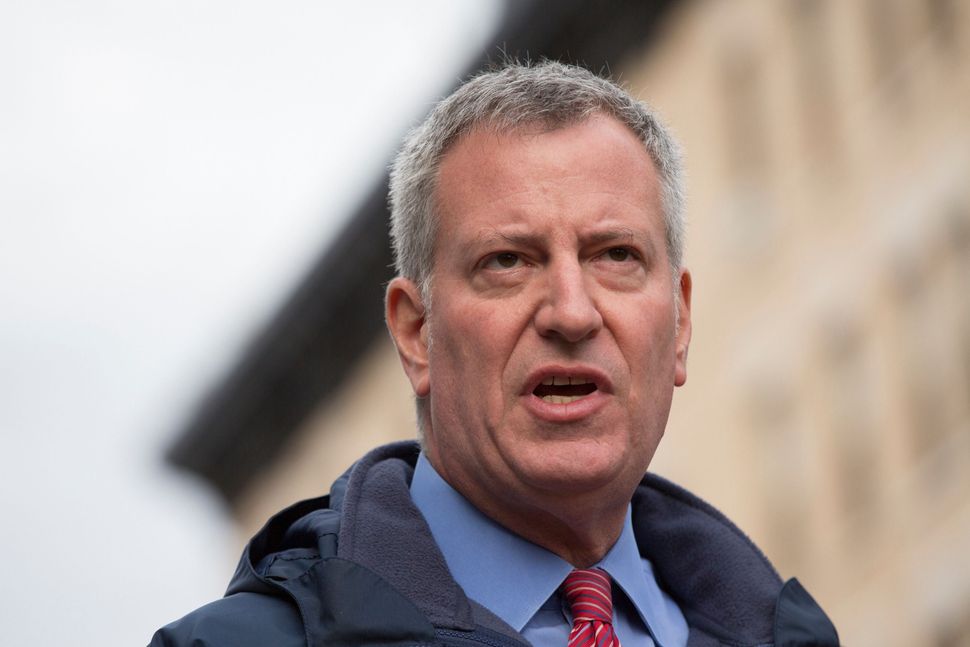 New York City Mayor Bill de Blasio issued a message to the “Jewish community” Tuesday night after several hundred people attended the funeral for a Satmar rabbi in Williamsburg, prompting Jews and allies outside the insular world of the Satmar sect to condemn the mayor for his generalization.

In a string of tweets, the mayor called the funeral “unacceptable,” adding that he went there himself “to ensure the crowd was dispersed.”

Something absolutely unacceptable happened in Williamsburg tonite: a large funeral gathering in the middle of this pandemic. When I heard, I went there myself to ensure the crowd was dispersed. And what I saw WILL NOT be tolerated so long as we are fighting the Coronavirus

Jonathan Greenblatt, head of the Anti-Defamation League, also spoke out against the mayor’s comments, calling them “outrageous.”

Hey @NYCMayor, there are 1mil+ Jewish people in #NYC. The few who don’t social distance should be called out — but generalizing against the whole population is outrageous especially when so many are scapegoating Jews. This erodes the very unity our city needs now more than ever. https://t.co/jcYO9QQred

The World Jewish Congress also announced that they will formally censure the mayor.

From Opinion: De Blasio is stoking anti-Semitism. He’s not alone.

Social media was filled with images of hundreds of people attending the funeral for Rabbi Chaim Mertz who died earlier in the day from coronavirus.

Tipster says this is the Williamsburg funeral today of Rabbi Chaim Mertz who died from COVID-19 pic.twitter.com/wsTvCrlzpb

In a following tweet de Blasio issued a warning to the Jewish community: “My message to the Jewish community, and all communities, is this simple: the time for warnings has passed. I have instructed the NYPD to proceed immediately to summons or even arrest those who gather in large groups. This is about stopping this disease and saving lives. Period.”

The Orthodox Jewish Public Affairs Council asked why the mayor had not criticized the many New Yorkers who took to the streets Tuesday to watch a flyover by the Blue Angels.

Police were on hand at the funeral, and videos from the scene show organizers and officials attempting to disperse the crowd and encourage social distancing. The New York Post reported no arrests or summonses were made at the funeral.

The secretary of the synagogue that held the funeral, Beit Midrash Tola’as Yaakov, said in a statement that staff thought a funeral procession would be fine if all the marchers stayed six feet away from each other, which did not happen.

“People walk the streets daily, thus, a funeral – we thought – shouldn’t be different, as long the rules are followed. Unfortunately, this didn’t pan out, and NYPD had to disperse the crowds,” wrote the secretary, Jacob Mertz. “It also hurts that this led to singling out the Jewish community, and for that we apologize to all Jewish people. We know that the mayor’s reaction came from his concern to the health of safety of our community and the entire city, and it wasn’t ill-intentioned.”

Der Yid, a Satmar newspaper associated with one faction of the Hasidic dynasty, criticized in Yiddish the “unjust threats from Mayor de Blasio that there would be mass arrests of Jews.”

“The police arrived with great chaos and with their sirens on, which caused panic and a stampede among the gathered mourners, despite the fact that, according to our latest information, the streets were divided up and prepared for the funeral with permission from officials,” said the Der Yid email.

De Blasio’s comments were quickly condemned by the Jewish community. Chaim Deutsch, a New York City Council member who represents an Orthodox neighborhood in Brooklyn wrote on Twitter, “This has to be a joke. Did the Mayor of NYC really just single out one specific ethnic community (a community that has been the target of increasing hate crimes in HIS city) as being noncompliant??”

This has to be a joke. Did the Mayor of NYC really just single out one specific ethnic community (a community that has been the target of increasing hate crimes in HIS city) as being noncompliant?? Has he been to a park lately? (What am I saying – of course he has!) https://t.co/LYKnUZm2Mc

But singling out one community is ridiculous. Every neighborhood has people who are being non-compliant. To speak to an entire ethnic group as though we are all flagrantly violating precautions is offensive, it’s stereotyping, and it’s inviting antisemitism. I’m truly stunned.

Senator Ted Cruz, Republican of Texas, and others joined in voicing their condemnations.

Would DeBlasio have sent this identical tweet with the word “Jewish” replaced by any other religious minority? If not, why not? Laws should be enforced neutrally w/o targeting religious faith. #ProtectFreeExercise https://t.co/dMVcX0bin4

I think you mean part of a specific community (some 50,000+ people) in a specific neighborhood – you know, the ones probably not reading this tweet.

Are you kidding me? We are not a monolith, and neither are the specific communities you are calling out.

This is disgusting and antisemitic, and especially dangerous considering the recent uptick in antisemitic attacks.

You just singled out a highly diverse and vulnerable religious community for imperfections that are not unique to it. Why didn’t you just start with “The time for warnings has passed. I have instructed the NYPD….”? You owe “the Jewish community” an apology.

The funeral procession highlights the spotty record that Orthodox groups have shown in trying to maintain a near-total shutdown of communal religious life in the city. While major Orthodox umbrella organizations, like Agudath Israel of America and the Orthodox Union, as well as influential schools and leading rabbis have called for Orthodox Jews to refrain from attending any prayer gatherings or sending their kids to in-person classes, high-profile funeral gatherings in Borough Park, and some secretly-open ritual baths and schools have drawn media attention and condemnation.

Recently a smaller funeral procession was held in Crown Heights, and minyans — prayer groups — in front of 770 have persisted.