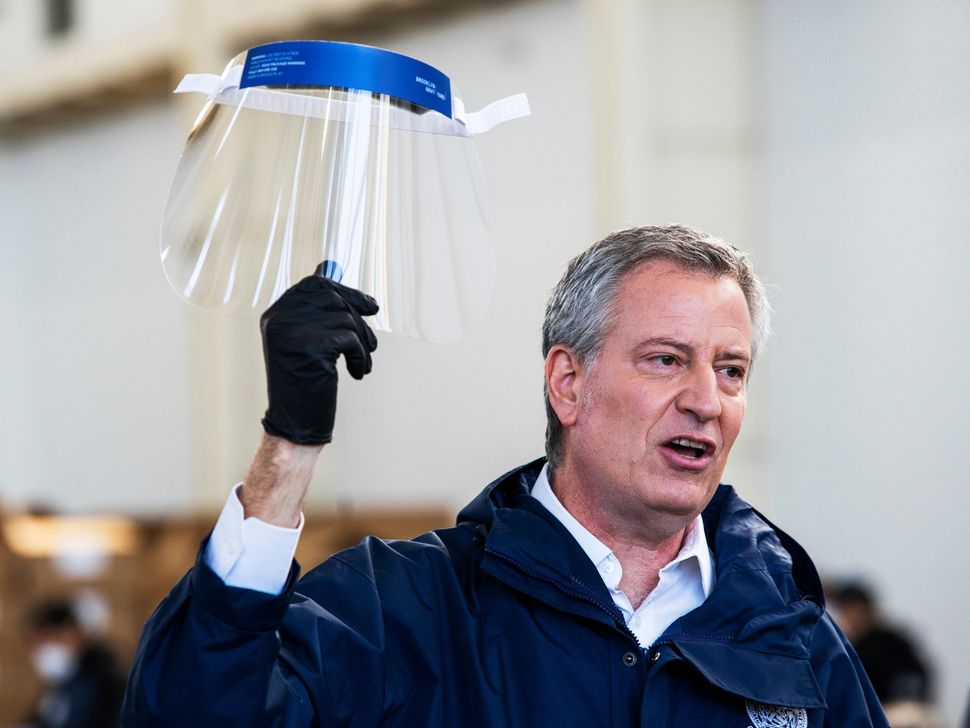 On Tuesday night, Mayor Bill de Blasio declared war on New York’s Jewish community. The very same mayor who went to the gym the day after closing New York City’s schools, restaurants, and bars and who took a stroll in Prospect Park on Saturday, as news was breaking that 28 New York City schoolteachers had died from the virus, has ventured out yet again into a crowd. This time, he went to Williamsburg, Brooklyn, where a large number of Satmar Hasidim had gathered. The mayor went to personally “ensure the crowd was dispersed,” the mayor explained in a tweet.

And then, he took things one step further.

“My message to the Jewish community, and all communities, is this simple: the time for warnings has passed,” the Mayor tweeted. “I have instructed the NYPD to proceed immediately to summons or even arrest those who gather in large groups. This is about stopping this disease and saving lives. Period.”

The tweets would have been outrageous coming from any elected official. Certainly, the city has the right to police people breaking its stay-at-home ordinances. Protecting first responders and flattening the curve are absolute values in the public interest. But the mayor painted a whole community with the brush of its offenders – portraying the entire “Jewish community” as diseased malefactors requiring police intervention to stop the spread of the virus.

It was grossly anti-Semitic, casting New York City’s 1 million Jews with the brush of a few hundred. And it was doubly offensive given the mayor’s failure to protect Orthodox Jews last year as they suffered daily physical attacks on the streets of New York City.

Unsurprisingly, de Blasio had no opprobrium for the thousands of New Yorkers who, like himself, were tempted by the weekend’s warm weather to enjoy the city’s parks.

Couple all that with the fact that Satmar Headquarters is claiming that the mayor’s office initially approved the funeral and coordinated it with the NYPD, and you have a truly shameful debacle.

This Funeral was originally approved and actually organized by @NYPDnews 2 hours b4 it started, PD brought trucks with barriers/tower lights to close off Bedford Avenue and the surrounding area. It’s the @NYCMayor’s Dept who originally approved it before deciding to take it back. https://t.co/i1EtGvCkKO

The mayor is being roundly denounced, and rightfully so. But de Blasio’s ugly sentiments do not stand alone.

From the beginning of the outbreak, Orthodox Jews have been uniquely cast by the media as the villainous spreaders of the coronavirus, despite there being little evidence to substantiate that claim. Indeed, while being beaten up on the streets of New York for a year, Orthodox Jews couldn’t get anyone to pay attention to them. Now that they can be cast as villains rather than victims, the media can’t seem to get enough of them.

Though Brooklyn’s Prospect Park is filled with families every time the weather breaks 60 degrees, though other communities have struggled to convince their members not to attend funerals, though New Yorkers just keep finding their ways into big crowds, it’s pictures of Orthodox Jews in black hats that people keep posting and sharing – voraciously – on social media.

Certainly, some Orthodox Jews have flouted the rules; they deserve censure and even intervention. But breaking the rules to give respect to the dead – one of the most important tenets of the Jewish tradition – is certainly of a different moral order than breaking the rules because you’re worried about your expanding waistline. And the amount of attention – the kind of attention – that Orthodox rule-breakers have attracted has been completely different from that of any other community.

Compare the coverage of Orthodox funerals – photos of which are breathlessly shared on social media – to the (correctly!) mournful coverage accompanying a southern funeral with 200 attendees that turned into a “super-spreading event,” or the compassionate concern for communities in New York struggling with the never-ending feeling of isolation.

Two New York Times stories on April 9 provide an instructive compare-and-contrast. One article was headlined “Fear and Frustration Increase With Spike in Cases in Jewish Enclaves.” It was about Monsey, a hamlet in upstate New York, where cases were spiking, and the reporters started by saying that Monsey had the highest per-capita rate of infection in the state – a number that would no longer be accurate just a week later, as Ari Feldman reported in The Forward. “The source of the problem,” The Times explained, “lies in small pockets of the county that are home to a large number of Orthodox Jewish residents, some of whom, according to authorities, have refused to adhere to social-distancing requirements.”

While Orthodox Jews were cast as the “source of the problem,” absent any substantiating data, another article in the same edition of the paper bemoaned the “Losses Sweeping Immigrant Enclaves in Queens.” This piece explored reasons immigrant communities were suffering so much loss from the virus, including overcrowding, high rates of poverty, and a big language barrier – all things that are equally true of the Orthodox community, but that American journalists almost never bother to mention.

Perhaps this would make sense if there was evidence that Orthodox Jews were worse offenders. But while the infection rates were highest in Monsey at the beginning of April, they were quickly eclipsed by Garnerville and West Haverstraw. Purim, the religious holiday blamed for the spread, occurred on March 10 this year – five days before New York City closed restaurants. Three days after the rabbis of Lakewood, N.J., were issuing official edicts to their followers to stay home, Mayor DeBlasio went to the gym.

After a year of mostly silence from the news media as Orthodox Jews were attacked daily, the lurid excitement at casting a community in mourning as diseased predators is sickening.

Mayor DeBlasio should be ashamed. But so should those of us in the media who have furthered the canard he stumbled into.

We can all understand how the virus can spread in poor immigrant communities and why ethnic groups in the South attending funerals deserve our compassion. It’s telling that we can’t extend the same to Orthodox Jews.