Coronavirus is deepening the divide between Orthodox and liberal Jews 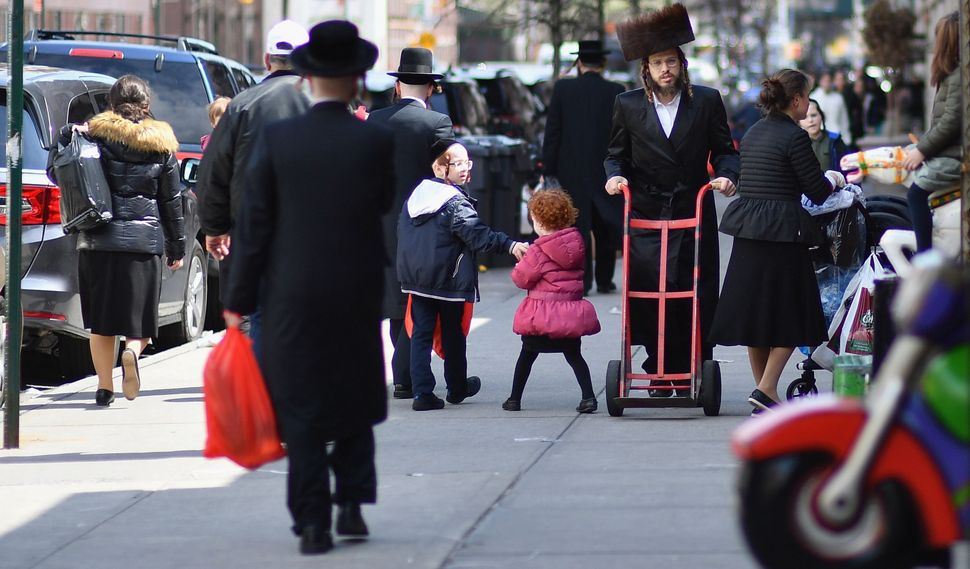 When my mom-friends and I were discussing where to do our Passover shopping last weekend, one sheepishly asked, “Is it anti-Semitic for me not to want to go to the kosher supermarket because of coronavirus?”

Yes, I immediately answered. While some Hasidic neighborhoods in Brooklyn and upstate New York — and Israel! — had been a bit slow to adopt social-distancing, it hardly seemed fair to boycott businesses over it. But others in our kaffeeklatsch insisted it was not only not discriminatory but smart to stay away, and shared the wisdom that a ShopRite in the neighboring town had historically had well-stocked Passover aisles.

What a difference a couple of months — and, yes, a global pandemic — make. As recently as January, 25,000 mostly non-Orthodox Jews had marched across the Brooklyn Bridge to protest the frightening rise in anti-Semitic violence in those very same Hasidic neighborhoods. It was an unprecedented show of solidarity with what we came to call the “visibly Orthodox” — and it turned out it was a fleeting one.

The fear of being attacked because we’re Jewish has been overtaken by a different, more directly present set of fears. Now we are more interdependent than ever. This invisible, insidious enemy feeds on selfishness — anyone who puts their individual desires over the collective responsibility to flatten the curve threatens to unleash the virus, to overtax the health systems, to make our long national nightmare even longer.

To many liberal/secular/mainstream Jews, that’s what the ultra-Orthodox’s apparent lag in fully disbanding prayer and study groups looked like — in part because we never really understood or respected the insular, seemingly obsessive religious way of life in those communities in the first place.

The day after the shopping conversation, I received an email from a self-described “very discouraged Jewish doctor.”

“I mention my origin and my religion because I don’t want this to sound as an anti-Semitic rant, but the way some Orthodox Jewish groups are acting is right down criminal,” the doctor wrote. He went on to call “them” fanatics, zealots, practitioners of “religious apartheid” and “a special kind of dysfunctional individuals.”

It was clear this was not just about the outbreak. “I often think of them as ‘them,’ never as us, the rest of the Jewish community,” the doctor said. “I think they want to show the rest of us that we are second-class Jews.”

There has been a lot of anti-Semitism swirling around this pandemic, much of it echoing the blood libels of prior eras. Jews are accused of having created the novel coronavirus, of trying to profit off of it, of hoarding critical medical supplies. “Zoombombing” seems to have become the neo-Nazi’s latest hobby; the Anti-Defamation League’s hate tracker chronicles numerous instances of synagogue programs being hacked.

But what if there are legitimate criticisms about a community’s behavior? After all, there were videos of people continuing to gather for weddings in Hasidic Williamsburg, Kiryas Joel and Bnei Brak long after public officials banned such congregating. And there are documented reports of higher rates of illness and death in those and other Orthodox areas — which might be because they didn’t adopt social-distancing fast enough, or because they are dense neighborhoods with high rates of poverty, like other New York virus hotspots.

Of course, there were also videos of hipsters lollygagging in Brooklyn parks and drunken idiots on Daytona Beach. But I didn’t hear stories of people avoiding hipster grocery stores. The evangelical Liberty University was one of the last campuses to cancel classes, and has already reopened the campus. It didn’t lead to widespread condemnation of evangelical Christians.

Haredi Jews are an especially easy scapegoat for bigotry and anti-Semitism because they are easily seen as other, even alien, the result of their dress, geographic segregation, private schools that sometimes shun math and science, and some even speaking Yiddish rather than English as a primary language.

Stressful times, of course, underscore our essential tribalism. Last fall and winter, when visibly Orthodox Jews were attacked viciously in Jersey City, N.J., Monsey, N.Y. and Crown Heights, Brooklyn, that tribalism was our Jewishness. Many liberal, secular and mainstream Jews felt guilty that the Orthodox seemed to be taking the hit for all of us because of their visibility; there was even a movement to make ourselves more visibly Jewish: People put on yarmulkes and pulled their Stars of David outside their shirts.

Now, in the era of social distancing, the commonality among us as Jews seems to be taking a back seat to the differences in the way we live our lives. This virus doesn’t distinguish by religion or anything else, but lifestyle is essential to its spread, so we feel much more kinship with our non-Jewish suburban professional neighbors taking socially distant hikes and posting homemade signs on trees to thank first responders than we do with the black-hatters of Borough Park who don’t respect our rabbis’ credentials.

I was troubled by the mean-spirited tone of the “discouraged Jewish doctor,” and when I asked whether he had any recent evidence of the Orthodox violating public-health guidelines, as opposed to examples from mid-March, he said he had not personally witnessed any, then referred to a colleague who never materialized for an interview. And yet, part of what he said resonated: I do feel that many Haredim disparage us as “second-class Jews” because we do not observe the way they do, and that’s at least part of why we sometimes struggle to show them empathy.

On my walk last Sunday I ended up in the back yard of the friend I went with to the “no hate, no fear” march in January, sitting six feet away from her, her husband, their sons and his mother. She said she was feeling “disgust and shame” about the Haredi refusal to follow all the public-health restrictions. I reminded her of the solidarity moment we’d shared, and she admitted, “I feel like I was play-acting back then, I was doing what I felt was the right thing for Jews across the board.”

That was actually part of why I shopped at the kosher supermarket last weekend, even though my Passover kashrut doesn’t require everything to have a label. In my efforts to support local businesses during this shutdown, I wanted to support the Jewish one. (I also felt more confident they’d have brisket, plus if I was going to make my mother’s matzah balls, I needed chicken fat.)

The store was not crowded, and most everyone was wearing masks and keeping distant. They had everything I needed except cake meal, plus lots of crackery snacks and that Passover cereal that tastes like chocolate cardboard. Done and done.

As I walked out, I got a call from the friend who’d gut-checked her own anti-Semitism the day before. The line at ShopRite was snaking around the parking lot, she said, so she wanted to know how it was over at Seasons.

Coronavirus is deepening the divide between Orthodox and liberal Jews