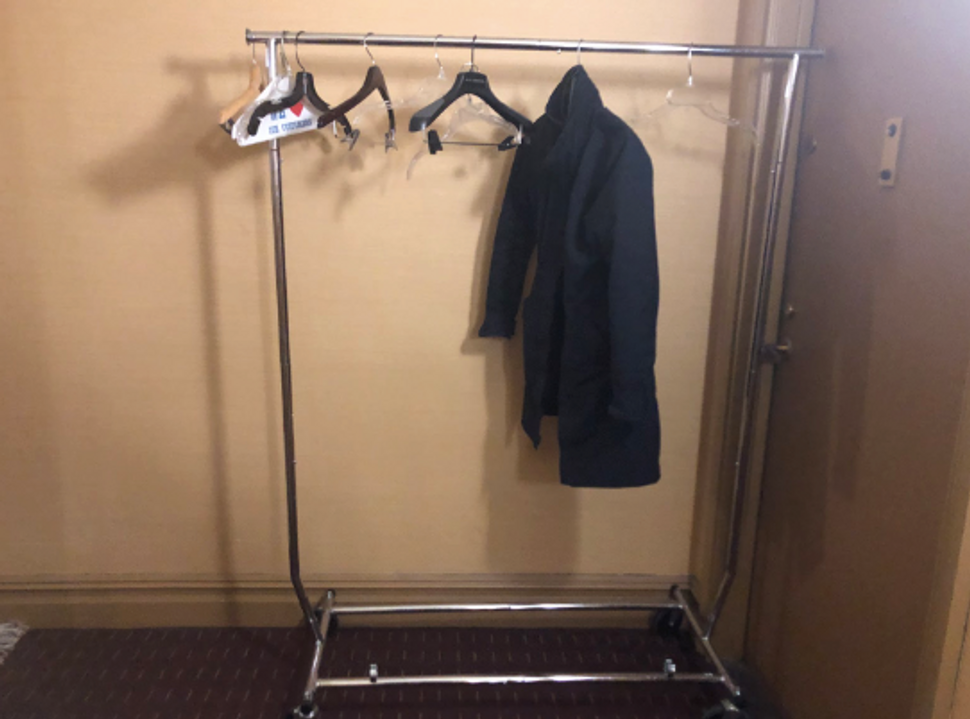 It was a somewhat absurd thing to do, in the hours before President Trump officially declared a national emergency, in this new era of social distancing: trek across state lines from my home in Montclair, N.J., to the Upper East Side of Manhattan. It was also the most natural thing I could think of to do, the right thing, the only thing.

The mourner was Roberta Caplan of the Forward’s development department, a pistol of a woman who used to be a dancer and now runs our annual gala, among many other things. The dead was her 107-year-old father, a giant of a man who served in World War II and practiced medicine in Pittsburgh until he was 95 and was rarely seen without a tie.

When I arrived, there was a single coat on the rack in the hall. A note was taped on the door: “Kindly Purell before signing the condolence book.” (When did “Purell” become a verb?)

Shiva is perhaps my favorite Jewish ritual, and definitely the best mourning one I have seen in any culture. The person whose parent or spouse or sibling — or, heaven forbid, child — has died stays sheltered in place, sitting on a low chair, mirrors covered, sometimes not even showering, shutting out the normal stuff of life to focus on not the death but the life of the one they have lost.

And we recreate the community around them: organizations send platters of food; synagogue lends chairs and prayer books; acquaintances come twice a day to make a minyan, the quorum required to recite the memorial prayer; people simply show up and sit down, as the mourner shares stories of the one who is not there, who will never again be there. It works.

Now we’re all sheltered in place.

Shiva is all about showing up, and suddenly we can’t show up in the places we usually do, in the way we’re used to. But showing up is what’s going to get us through this pandemic as a community, as colleagues, as Jews. Just not physically.

So I sent little messages to everyone Facebook said was having a birthday on Saturday, something I often skip because it seems so silly and rote. I’m feeling more inclined to post on social media generally — and to like and comment on what I see, just to make clear it was seen.

I’m making many more actual phone calls instead of just texting — on the way to Friday’s shiva I dialed a series of colleagues, and each time I said it was “just to check in, see how you’re feeling,” I could feel this sense of gratitude pouring back. When I signed on to stream Kabbalat Shabbat services, I felt the urge to post a picture of our family even though we were in pajamas, to register: we’re here with you.

These next few weeks are going to really drive home the importance of truly being present. During one of my Zoom meetings on Thursday, when I clicked over to check email for a second, the woman I was talking to stopped mid-sentence — “wait, where’d you go?” She was just worried there had been a technical glitch, but actually she had caught me in the sin of multi-tasking when she deserved my undivided attention.

It’s happening with my kids, too — they’re telling some story but my head is in the news blasting from Alexa or the project open on my laptop. With the boundaries between home and work and school and synagogue all disappearing, we’re going to have to be vigilant about protecting each sphere of our lives and committing even more fully to the people in them.

But I’m also thinking about all that time we all waste commuting and shuttling around town, and how we might put it to better use. Repaint their rooms! Finish that puzzle! Ping-pong tournament! Maybe I’ll finally create that Etsy store for the tubs of hand-knit baby clothes my mother made.

I’m going to talk, really talk — to the kids, to friends, coworkers, sources, maybe even strangers.

That, of course, is all we did on Friday at shiva. My colleague told me about her father’s last days: it was a quiet death, a good death, she and her sister and the rabbi around the hospice bed to say goodbye. And she told me about his glory years, his funny stories, their special relationship. We looked at pictures of him in his natty outfits.

The office had sent a beautiful platter of bagels and smoked fish that barely showed a dent, since I was one of scant few visitors. It freezes well, I told her; yes, she said, I’ll bring it into work when we go back.

As we kibbitzed, text-messages kept pinging on her phone. Turns out I wasn’t the only one showing up that hour. Shiva in the age of social-distancing is still as sweet.

Saturday morning, I got a notification that a friend was doing a Torah study by Zoom and decided to participate, something I’d rarely have — or rarely make, at least — time for pre-pandemic. My daughter sat next to me for it; she had a second screen going with some silly game, but she was listening to the discussion about the golden calf, too. Later we played many, many rounds of Scattergories, a super-fun game we’ve had for years but I hardly remember opening.

And then we joined a Zoom havdalah led by our cantor, which led to an exuberant group-text filled with emojis. “It was weirdly wonderful!!!!!” wrote my friend Amy. “Loved seeing all of u!” said Peri. Sarah added, “Felt more like community than ever!”

And I suggested: “Let’s keep doing that after we get back to normal.”