How not to talk about coronavirus in the Orthodox community 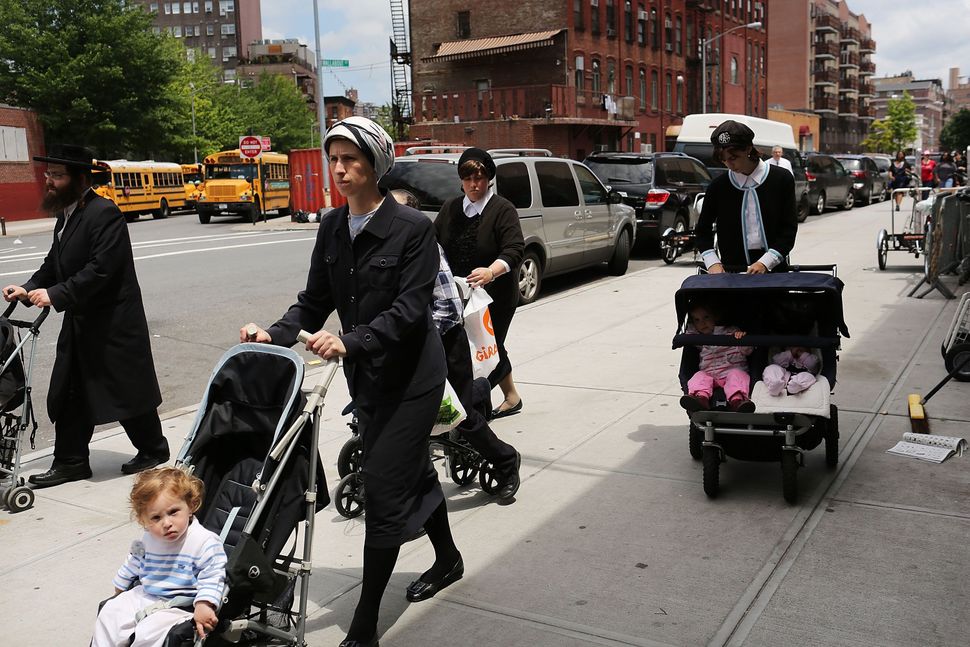 Members of the Jewish Orthodox community walk down a street in a Brooklyn neighborhood on June 14, 2012 in New York City. According to a new study by Jewish Policy & Action Research, New York City’s Jewish population, especially the Orthodox community, is growing. The study found that there are 1.54 million Jews living in 694,000 Jewish households in New York City and three suburban counties. This represents an increase of 9 percent between 2002 and 2011 of Jewish residents. Outside of Israel New York has the highest percentage of people identifying themselves as Jewish. (Photo by Spencer Platt/Getty Images) Image by Getty Images

Tuesday was the COVID-19 tipping point for New York’s Hasidic communities. Rumors began circulating that morning that in Boro Park, at one clinic alone, there were hundreds of new positive test results, marking an extreme jump in cases of the virus. While it later turned out that rumor was overblown, it was true that well over 100 new cases were confirmed — across Brooklyn’s entire Hasidic community.

As often happens when news stories involve Orthodox Jews and especially Hasidim, there is an outsized focus on the religious identification. That’s fine, I suppose. It is, after all, part of the news story; the lives of these people, the unique contours of their communities, how the virus and its sudden onset impacts them, and how they are reacting to it — these are all fair things to cover.

But what isn’t okay is to engage in the sort of coverage we’ve seen, which frames this as a uniquely Orthodox Jewish problem — as though that ever ends well for anyone — and engages in wholesale criticism of this community. Doing this just because they are also struggling with something the entire world is trying to figure out how to combat and cope with is just wrong.

Much has been made already of the unique struggle Jews — especially Orthodox Jews — have with social distancing. We are, after all, a people formed on and sustained through the very opposite ideal: We worship together, study together, shop together, celebrate together, and mourn together. And, in what is perhaps the greatest irony about today’s pandemic and the social distancing that’s mandated, we usually overcome adversity by dealing with our challenges together.

This strength of ours will get us through this as well, with some revisions. But there is a weakness inherent to this strength: When it comes to communicable diseases, we are more at risk than a typical community that doesn’t have as much interaction with each other, even when we take all the same precautions as everyone else.

And our attachment to each other makes us seem a lot more like a single monolith than we are, contributing to the impression that the virus is spreading from one Orthodox community to the next when what’s really spreading is concern. That’s why even though I live in a New Jersey town that only first got a confirmed positive test yesterday, we already knew about what was happening in Hassidic Brooklyn.

Of course, at the same time, there is the focus on covering those who are acting irresponsibly — especially those who are identifiably Orthodox. At least one Brooklyn wedding had to be cut short by the authorities, as the number of people in the banquet hall exceeded CDC and New York state guidelines, making it easy to blame the spike in cases on a “lax attitude among the general population in the neighborhood.”

It’s a fair criticism, to be sure. There is certainly more that can be done to encourage our community to adopt this foreign concept of social distancing to prevent further spread (even as I write this, more is being done). And it goes without saying that anyone who does anything which is out of compliance ought to be condemned.

But for a media with a penchant for dehumanizing the Orthodox, it’s crucial that coverage be fact-based. For example, when thinking about who is to blame for the outbreak in the Orthodox community, it’s important to bear in mind that the CDC’s “15 Days to Slow the Spread” guidelines were first released on Monday afternoon. The New York State limitation on gatherings of 50 people or more (which is included in the CDC recommendations) only went into effect Monday evening at 8:00 p.m.. And given the backlog, the turnaround time for the COVID-19 tests can be up to 48 hours. What this means is that many of the people whose tests came back positive on Tuesday were tested before any of the revised guidelines went into place.

And, as the CDC has told us, people can be asymptomatic for as long as 14 days after they’ve contracted the virus. It’s probable that many of the people testing positive were infected over a week ago, before the guidelines were in place, rather than this week, ignoring those guidelines. It’s really perverse to blame that on a “lax attitude.”

Furthermore, those anecdotal stories of “Hasidim” who ignored the fast and ever-changing CDC guidance are not necessarily representative of the broader community. Of course, there will always be people who act irresponsibly no matter what community they are in. The beaches in Tampa Bay are reportedly filled with people, and even New Jersey Governor Phil Murphy said that people, at large, were not grasping the severity of the issue.

“Bars were so packed… anecdotally people couldn’t get in, and at same time you couldn’t find a roll of toilet paper in the entire darn state…..we had to take dramatic steps.” pic.twitter.com/13TeAWYlzW

There’s just no reason to over-blame the Orthodox community, as though there is something uniquely bad here. That isn’t, and should never be, okay.

We should all strive for a little more kindness at this trying time. For some, this should start in how they depict our community, whose message is relevant to the entire world at this time: We’re all in this together.

How not to talk about coronavirus in the Orthodox community