At least 100 test positive for coronavirus in Hasidic Brooklyn neighborhood 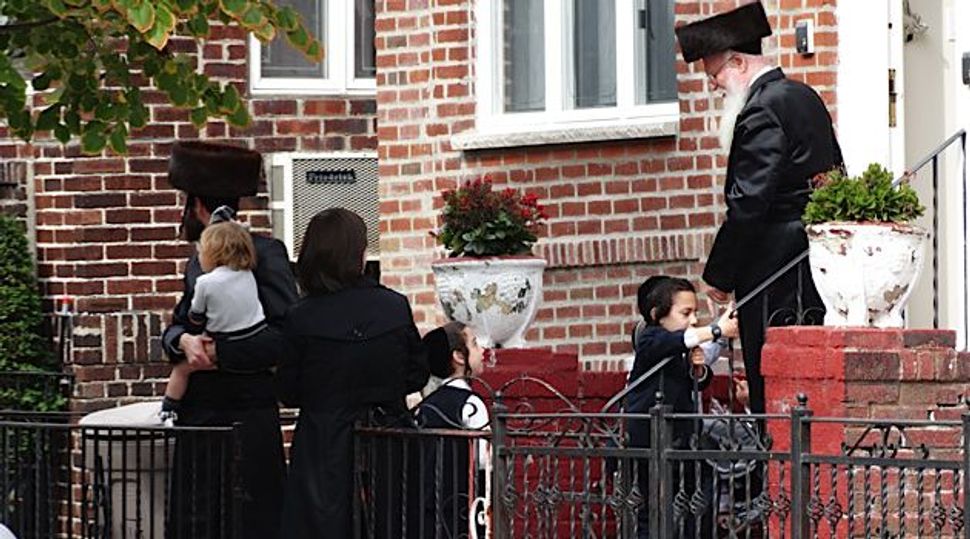 At least 100 people have tested positive for coronavirus in Brooklyn’s Hasidic Borough Park neighborhood, amid intense debates within and around such communities over continued gatherings for prayer, study and celebrations like weddings.

The news of the outbreak was first reported by the Jewish Telegraphic Agency, which cited an official at Asisa, an urgent-care clinic in the neighborhood that caters to the Hasidic community.

Related story: Panic is gripping my Orthodox community as we navigate the plague

According to the Asisa official, who asked to remain anonymous because of restrictions on speaking to the media, the 100 positive tests have come since the clinic began testing on Friday morning. The clinic has conducted about 500 tests so far, and results are pending for some of the tests.

According to Hamodia, the tests were done solely on people exhibiting symptoms of having contracted the virus or from people in proximity to people who have tested positive.

Avi Greenstein, chief executive of the Boro Park Jewish Community Council, said that Hasidic Jews, like the rest of the world, have been caught flat-footed by the growing severity of the changes to regular social life that health experts are advocating to fight the virus. But he said that the spike in infections was clear evidence that the Hasidic community had been slow to act decisively in stopping the spread of coronavirus.

“We were late as a community in closing our schools,” he said.

This gives me hope. A PSA in Yiddish in Borough Park encouraging people to stay home as much as possible because of the coronavirus. pic.twitter.com/O1aRF9qtAG

“We’re gonna be having conversations, meetings, a lot of studies about this, about how information gets to the rabbis,” he said. “We will be searching inwards so that we can figure out how we can be better prepared for this in the future.”

Greenstein said that the relatively slow response from community leaders and the community in general was because the Hasidic world has never had to face a threat like this before, and they were not immediately prepared to enforce the social distancing measures recommended by health experts.

“It’s such a radical change of our social life and community lifestyle,” Greenstein said. “Our lifestyle is praying three times together, going to weddings and dancing — that’s the norm. To change that norm is something that’s very difficult.”

But, he added, “It’s not an excuse for anything.”

The community’s response changed after Avi Berkowitz, an advisor to Donald Trump, had a conference call with major Hasidic rebbes, or rabbinical leaders, in the New York area, including Boro Park. In the conference, Berkowitz laid out the severity of the virus, and the recommendations of government health officials in enforcing social distancing to limit its spread, according to Ushi Teitelbaum, a Hasidic community activist and the community liaison for City Councilman Mathieu Eugene.

In response to the call, virtually every yeshiva in New York City that was still open closed indefinitely this afternoon, as did major Hasidic synagogues, Greenstein and Teitelbaum said. Smaller synagogues that remain open are instituting smaller minyans in shifts, to keep the prayer groups to around 10 people. They are expecting rabbis to release letters about the advice from health officials on social distancing.

CORRECTION: The following community leaders participated in the conference with WH officials:

Another half dozen “askanim” were invited as well.

Ahead of news of the changes made in the wake of the White House call, the condemnation of the Boro Park community’s apparent lax response to the spread of coronavirus drew harsh responses, especially from within the Orthodox world.

In a Facebook post, Dr. Stuart Ditchek, a pediatrician who has been sounding the alarm in the Orthodox world over the severity of coronavirus said that Boro Park requires immediate state-level intervention.

“I dont think they’re going to listen to physicians right now,” Ditchek said of Hasidic Boro Park residents in an interview Tuesday evening. “The rabbis in Boro Park have to get together immediately and act on this.”

Teitelbaum, who lives in Boro Park, said he was appalled and frightened by the spike in cases and blamed it on a lax attitude among the general population in the neighborhood.

“I walk in Manhattan, it’s empty,” Teitelbaum said. “I walk on 13th Avenue in Boro Park, it’s full. This going around and hanging around has to stop.”

Teitelbaum said he is confident that there are going to be major changes to the neighborhood. The rabbis who participated in the call with the White House had not previously understood the severity of the virus, or the extreme measures recommended to combat its spread, Teitelbaum said.

“They don’t watch TV, they’re not on social media — that’s why that phone conversation was so important,” he added.

Mordy Getz, the owner of Eichler’s, a prominent Judaica shop and bookstore, and an influential philanthropist in the Hasidic world, said that he had seen both good and bad actions over the coronavirus response in Hasidic Brooklyn. On the one hand, organizations like Hatzalah, the volunteer paramedic group, and Shmira, volunteer community safety patrol, had “sounded the alarm” on coronavirus last week, and asked rabbis to tell communities to quarantine.

But there were also leaders of yeshivas that waited until the last possible moment to close.

“As people in leadership, they carry a responsibility to educate people,” Getz said. “So when they don’t shut down, people learn not to take medical advice seriously. So they continue with their weddings, their social events. That is bad.”

Getz said he has also heard about yeshivas that are evading government detection by holding classes in basements of community centers.

At least 100 test positive for coronavirus in Hasidic Brooklyn neighborhood