De Blasio: Jewish funeral broken up because it was ‘thousands of people’ 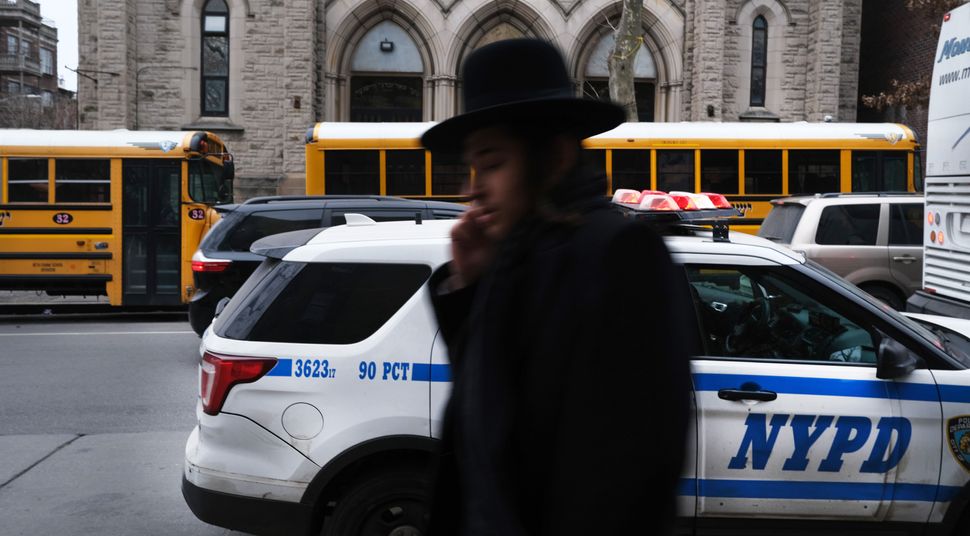 A member of an Orthodox Jewish community walks through a Brooklyn neighborhood on December 29, 2019 in New York City. Image by Spencer Platt/Getty Images

Mayor Bill de Blasio of New York on Wednesday defended his actions the night before in personally venturing to Williamsburg, Brooklyn, to disperse a crowd at a funeral for a Hasidic rabbi and then sending a Tweet about it that outraged many in the Orthodox and broader Jewish community because it seemed to blame all Jews for the funeral.

“Members of the Jewish community were putting each other in danger,” de Blasio said at a news conference. “They were putting police officers in danger.”

De Blasio said his response was appropriate given the offense perpetrated by the mourners, because their gathering was so big, and planned.

Neither de Blasio nor his police commissioner, Dermot Shea, addressed reports that the funeral procession had actually been coordinated with the New York Police Department and the knowledge of City Hall. Shea said that 12 summonses had been issued for refusal to disperse and for violating social distancing. “That event last night never should have happened,” he said. “It will never happen again.”

The mourning event in the Williamsburg neighborhood Tuesday night was organized by followers of the late Rabbi Chaim Mertz. Organizers said that they thought the procession would conform with social distancing guidelines because they asked everyone to stay six feet away from each other. The police department cooperated by barricading streets and putting up street lights, according to David Greenfield, the CEO of a Jewish anti-poverty organization and a former city councilman.

2. The NYPD wanted to work with the chasidic synagogue out of respect for their revered (and well-known) late Rabbi so they literally barricaded streets for this “socially distant funeral.”

Video of the event showed that funeral marchers were also guided by members of Shomrim, the Jewish community security organization. A Hasidic source who is familiar with the Shomrim’s preparations for the funeral, but not authorized to speak publicly, told the Forward that the Shomrim and NYPD had worked together in planning the funeral.

“The plan was to have a specific number of people who could go into one street, then close it down, and have the car go to the next street,” the source explained. The source added that in addition to lights and barricades, the police had also approved having a sound system so that attendees could hear eulogies, but that at the last minute, officers ordered organizers not to use the speaker system.

In their joint news conference, de Blasio and Shea did not respond to the claims of NYPD involvement. Spokespeople for the mayor’s office and the NYPD declined afterward to discuss these questions, referring reporters to the transcript of the news conference.

The magic of the virtual press conference: Cant follow up, cant press when questions go unanswered. After last night, no clear answer why the NYPD went out and tried to accomodate in the first place. Barrier set up and mask distribution send signals. That part was not explained

A popular Twitter account that shares information about Williamsburg’s Satmar Haredi community claimed that the office of New York City Mayor Bill de Blasio had approved the parade, but a city hall spokesperson told the New York Post on Wednesday that no such permit was issued.

In a tweet that was criticized for allegedly singling out the Jewish community, de Blasio wrote on Tuesday night that in response to the funeral, he had instructed the NYPD to arrest or issue summons to people who violated social distancing rules.

De Blasio came under harsh criticism over the tweet from Jewish community leaders who felt he was singling them out. “It was said with love, but it was tough love,” he said at his press conference.

Rabbi Mertz was widely known and respected within the Hasidic community for his deep piety and devotion to study. In the world of the Satmars, the largest and most politically influential camp of Hasidic Judaism, he was a rarity: a prominent rabbi who didn’t involve himself in politics, building yeshivas or even the internal divisions of the community. In normal times, multiple Hasidic sources told the Forward, his funeral would likely have drawn tens of thousands of mourners, despite the small size of Mertz’s own synagogue.

“He was dedicated 24/7 to serving God,” said Yitzchok Frankfurter, the publisher of the influential Orthodox magazine Ami, and a second cousin of Mertz. “It was a home of piety and nothing else.”

De Blasio: Jewish funeral broken up because it was ‘thousands of people’