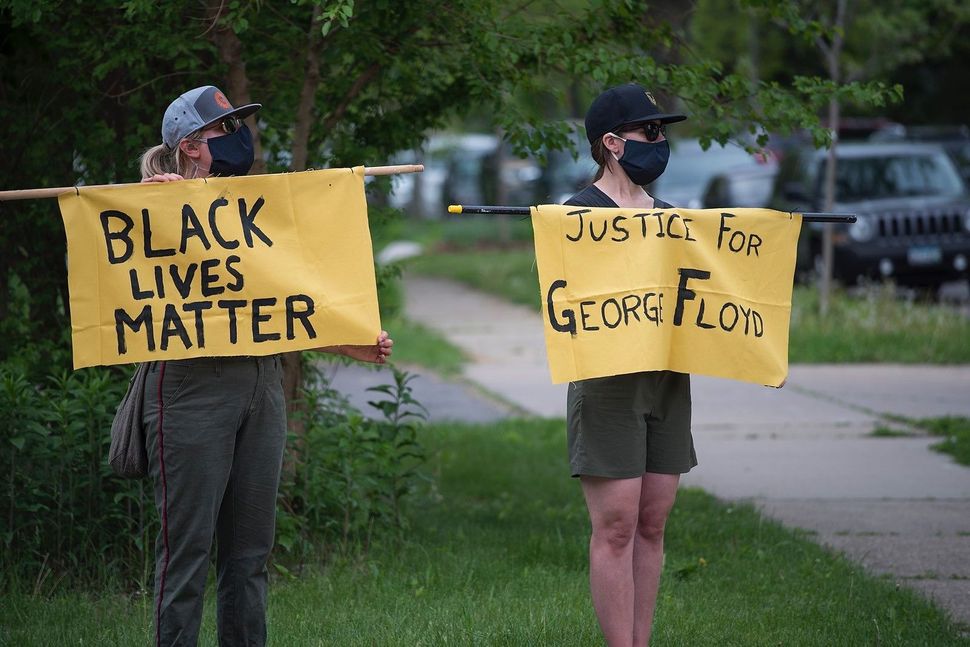 On May 26, 2020, people protested against police violence after the death of George Floyd. Two protesters, one with a Black Lives Matter sign and the other with a Justice for George Floyd sign. Image by (Wikimedia)

On Monday night, Minneapolis witnessed a lynching. A white police officer murdered George Floyd, and the video left no doubt of what had happened.

It’s not the first time this had happened here, but something about this murder seems to be moving through the city in a different way. Maybe it’s because of a pandemic – a pandemic that has already activated structures of systemic racism in ways that attack black and brown bodies first. Maybe it’s because as the warmer weather arrives, we are returning to the usual racism against black people in public spaces. Maybe it’s because in so many ways right now our collective processes feel fraught. How can we mourn when our yearning to be close could carry infection? How do we grieve when we can’t physically reach for one another? How do we begin to tell a shared truth about the depth of violence at the core of our society, when we can’t even share space?

I live in Minneapolis, on land stolen from the Dakota people, near the territory of the Anishinabeeg, in a state whose political boundaries only exist through the broken treaties and through the violation of Native sovereignty. Winters are cold here, and summers are glorious. We are credited with having one of the best quality of life indexes for white people, and the worst for Native peoples and people of color. Racism here often looks a lot like whiteness itself. We’ve baked our racial violence into the very systems that define us – education, healthcare, housing, even our parks.

Yesterday, organizers and community members put out the call for folks to gather at the corner of 38th and Chicago in South Minneapolis, where Mr. Floyd had been killed. Thousands of people put on masks and lined the streets at spacious intervals. Cars honked in support. People held signs that said “Black Lives Matter” and “Abolish Police Now.” Many of the signs were inspired by groups like MPD150 and Reclaim the Block – local initiatives led by young Black, Native, Brown, POC, Indigenous, trans and queer artists and organizers and cultural workers and community members who have spent the past years asking us to imagine a world without police. Even more so, these organizers have been creating the material conditions to make that world possible.

In 2018, Reclaim the Block ran a municipal budget campaign that diverted millions of dollars from the Minneapolis police department and invested those same funds in community-led healing projects. Today, Reclaim the Block and Black Visions released a statement calling on the Minneapolis City Council to once again divert funding from police and invest in community infrastructure in ways that could transform our city for years to come.

It matters that many of the organizers who are leading these groups formed relationships through organizing related to previous murders of black people by police in the Twin Cities. When Jamar Clark was murdered by police in 2015, the Minneapolis mayor responded with support for the police department. When Philando Castille was murdered on video by police, leaders lined up behind the police involved. This time, after years of black organizing on the ground, the four police officers involved in Mr. Floyd’s murder were immediately fired, and the mayor of Minneapolis has called for them to be charged with murder – something that didn’t seem possible five years ago. Black organizing has changed what we can expect from our city’s leaders and has transformed how justice can express itself in public. Our mayor’s call for charges against the officers isn’t enough, but the shift that it represents matters. As a white person and as a Jew, I know that if I want to live in a city where justice remains possible, then I need to keep finding ways to organize in solidarity with black leadership.

And still, there’s a part of this story I haven’t told yet.

Tuesday night at around 9 p.m., a group of mostly brown and black protesters went to the 3rd Precinct of the Minneapolis police department – a few blocks from where Mr. Floyd was killed. Things became heated, and instead of responding with de-escalation, police fired rubber bullets, tear gas canisters and pepper spray at the crowd. Eyes stinging, bodies hurting, community members stayed. People have remained gathered near 38th and Chicago, where a growing memorial of cards, flowers, signs and offerings fills the street. People have remained gathered, in witness and in vigil, wearing masks and keeping physical distance, all night and all day. Right now, I am reading texts and social media updates about more rubber bullets, more tear gas, signal-jamming of cell phones, further escalations of violence by the police. I am worried for my friends and for the violence they are facing.

I remember the first time I learned the words tikkun olam in Hebrew school as child. I remember the horror of it – what do you mean the world is already broken? What do you mean that we are shattered? And then the tender joy and quiet power of learning that I could do something about it, that as Jews, we seek to repair the world towards justice. What I learned later was that as a white Jew, repair of the world wasn’t enough. I had to do the ongoing work of repairing the parts of myself that wanted to believe that my whiteness would protect me. I had to repair the part of myself that seeks allegiance with white supremacy in its benign and cruelest forms, the parts of myself that tried to pretend that the systems of violence around us somehow aren’t violent.

While I was on my way to the protest Tuesday night, I received an email from my synagogue – also in South Minneapolis – that a neighbor had found Nazi graffiti on the benches and utility boxes across from our synagogue entrances. There was no direct threat, and the graffiti can be painted over, but I worry about other white people in my synagogue who see anti-Semitic graffiti and who feel like a police presence will keep them safe – at a direct cost to the safety of our Jewish siblings of color.

It’s not an accident that multiple forms of white supremacist violence and narrative are happening at once right now. The intense racism of our federal response to Covid-19 is not separate from the murder of George Floyd. The graffiti at my synagogue is not separate from the way that white supremacy uses anti-semitism not just to hurt and scapegoat Jews but to fuel its power to terrorize black, brown, native, people of color and indigenous people. I cannot be safe as a Jew while white supremacy persists, and nothing in my life can be okay while my black siblings are being killed. My Jewish tradition teaches me that we are interdependent and interconnected beings. I believe this is our strength and our gift to one another. May we one day all of us be free.

Liz Loeb is a Minneapolis-based civil rights attorney and community organizer. She serves as co-director of Kaleo Center for Faith, Justice & Social Transformation and is a member of Shir Tikvah synagogue.