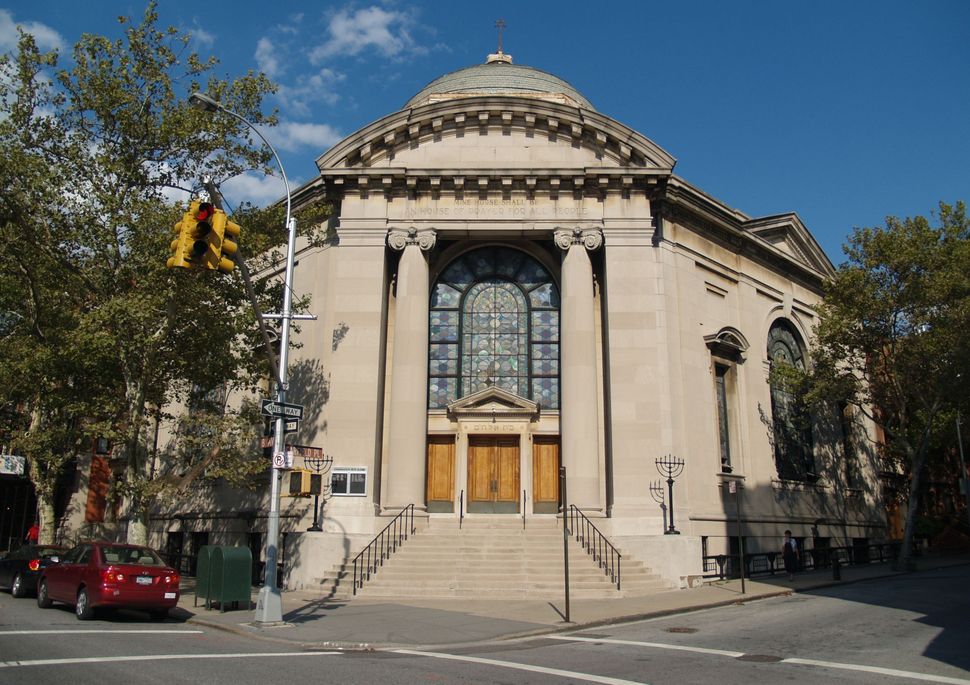 Two historic Reform synagogues in New York announced Thursday that they are entering merger talks. One is embroiled in a financial crisis made more pressing by the pandemic; the other is growing, but faces a $2 million shortfall due to the economic impact of the coronavirus.

In email messages sent to their congregations Thursday afternoon, Congregation Beth Elohim — the largest Reform temple in Brooklyn — and Union Temple said that financial difficulties tied to the pandemic triggered the talks. Union, which has been facing a severe financial crisis for several years and told its membership a year ago it would soon run out of money, initiated them.

The announcement marks the first major potential merger in the Reform movement since the onset of the coronavirus, though experts say it heralds more. The pandemic has forced both synagogues and the support organizations that provide them with training and other services to cut staff and seek emergency funding.

Even the president of the movement’s umbrella organization, the Union for Reform Judaism, said that the organization and its counterparts in other egalitarian denominations might merge some operations during his tenure.

The CBE-Union talks began in early April, and have been held over Zoom. Leaders of the two congregations said that while the initial meetings were largely secret, they are announcing the talks now to allow for input from their congregations.

“We’re building a sacred process for our communities to work through these questions together,” said Rabbi Stephanie Kolin, of Union Temple, in an email. “We want the process to be productive, healing, and future-looking, so it’s essential we don’t get out ahead of our communities.”

The synagogues share a neighborhood and much history. Located a 10-minute walk from one another in the heart of Brooklyn’s brownstone belt, both anchor the area as a bastion of egalitarian Judaism and progressive ideals. The congregations’ leaders — Kolin and Rabbi Rachel Timoner of CBE — have built their careers around social justice work.

Indeed, these merger talks are not the first for the two communities: In 1926, Union’s congregation voted down a proposed merger with CBE, then known as the Eighth Avenue Temple. In an article on the vote, the Brooklyn Daily Eagle said that the “long agitated amalgamation” “would have melted two of the wealthiest and most influential Jewish congregations in this boro into one of the foremost religious powers in Greater New York.”

“These are two congregations that are in very different situations at the moment but with a shared set of values that draw us to one another,” said Rob Raich, CBE’s president.

Founded in 1861, CBE is the larger of the two, with pre-school and after-school programs and a community center with a gym and a pool frequented by many non-Jewish neighbors in Park Slope. It recently created what it called an “emergency stabilization fund” to offset more than $2 million in lost revenue from such programs over the last several months. Yet the synagogue’s membership has been growing for years, and Rob Raich, CBE’s president, said earlier this month that the loss in revenue was not threatening the synagogue’s immediate operations.

“We are not going to hit that existential wall,” he said.

Union, founded in 1921, was financially fragile going into the pandemic, and is now more so. It counts 150 families as members, with others that enroll their children in the synagogue’s religious school. For over a year, it has been seeking a long-term loan to prevent its dissolution, though leaders said it has not been able to obtain one.    Union is “not big enough, strong enough, or well-resourced enough as a congregation to do what we dream of doing on our own,” the synagogue leaders wrote in an email announcing the talks, sent Thursday to the congregation. “We believe now that the most viable way forward is to engage with a strong partner who has the same dreams as we do.”

In the letter the synagogue said that the federal grant it received will carry it through July.

Union is not alone among American synagogues that have seen declining enrollment for years, and are now facing even more significant financial stress tied to the current economic crisis. More than 200 Reform congregations — out of 850 in North America — asked for assistance from the movement’s umbrella organization, the Union for Reform Judaism, in obtaining federal emergency assistance, Rabbi Rick Jacobs, the URJ’s president, said earlier this month.

The scope of the crisis could deepen in late summer, when people typically renew — or, as is possible this year, not renew — their synagogue memberships, according to Steven Windmueller, a professor of Jewish communal studies at Hebrew Union College-Jewish Institute of Religion in Los Angeles.

Long-established brick-and-mortar synagogues — which have been losing membership for decades — may also be in for a spate of mergers similar to what followed the 2008 financial crisis, Windmueller said.

“I think that those synagogues without multiple funding sources will be in the most precarious shape,” Windmueller said. “Congregations with schools, camps, cemeteries, senior housing, and other potential income streams have somewhat more options.”

Even with its financial stress, if the merger talks between the two congregations pan out, they will lead to the complicated process of unifying two unique communities. Though mergers are becoming more common, even across denominations, they are tricky.

The key to any successful synagogue merger is helping congregants from the two communities create relationships with one another, said Dr. Ron Wolfson, a professor of Jewish education at American Jewish University. That happens through open houses, coffee meet-ups and communal gatherings, he said.

“There has to be that kind of relationship building that will smooth the opportunity for the communities to come together, not just financially, physically, organizationally,” Wolfson said.

But there are also specific steps that can help make the physical merging easier as well, said Vicki Spira, co-president of the synagogue created by the last two large congregations to merge in the Reform movement, Temple Har Sinai and Congregation Oheb Shalom in Baltimore. The two synagogues have co-rabbis and co-presidents, and a board that is almost equally split between members from its two legacy shuls — an arrangement they agreed would last for the first two years of the new synagogue’s life.

In that merger, Har Sinai played the role of Union, bringing fewer members to the table. But Spira, formerly the president of Oheb Shalom, said that it’s important for the two communities to look past numbers.

In CBE’s letter to its congregation, the synagogue’s leaders said that Union had approached them about “combining congregations to become a stronger CBE together.”

Both communities are presenting the potential merger to the communities ahead of their respective annual meetings next week. They expect talks to take up to a year before any final vote.