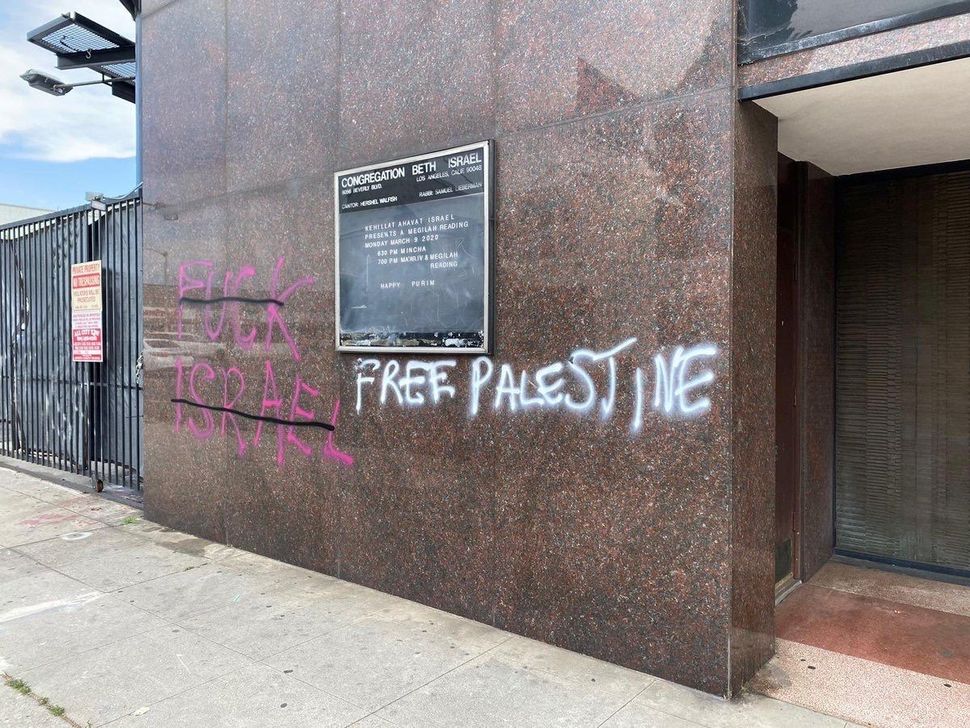 After protests that stemmed from the death of George Floyd descended into violence, vandalism and looting tore through Los Angeles on Saturday, sweeping a number of Jewish businesses and synagogues into the wake of destruction.

The day started peacefully, with thousands of people gathered to demonstrate against police brutality and systemic racism in Pan Pacific Park, in the historically Jewish Fairfax-La Brea area and the site of the Los Angeles Museum of the Holocaust.

Hearing that an Orthodox neighborhood in LA has been hit hard by looting. “Every store destroyed. Things are on fire all over,” a friend with family there tells me. This is video of Syd’s Pharmacy & Kosher Vitamins on Beverly Blvd. #laprotest pic.twitter.com/pf9SfkQ9ec

But the protests were ultimately subsumed in a pitch of smoke and broken glass. Police officers fired tear gas and rubber bullets into retreating crowds, civilians torched patrol cars, and people broke into the stores that line Fairfax and Melrose, trendy retail streets that cut through one of the city’s largest Jewish neighborhoods.

Video circulating on WhatsApp Saturday evening showed Ariel Glatt Kosher Market, a grocery on La Brea Boulevard, with its windows smashed in, several shelves emptied, and wares dumped across the floor. “All the liquor gone,” a person can be heard saying.

More video from last night in LA. Police rolling into an Orthodox neighborhood to cheers after a long night of looting which left several Jewish owned stores looted and synagogues vandalized. pic.twitter.com/PDYq1SCqYh

The wall outside Congregation Beth Israel, a historic synagogue on Beverly Boulevard that now only sometimes holds services, was spray-painted “FREE PALESTINE.”

Rabbi Moshe Pinto was on his way to the Baba Sale shul on Fairfax Avenue Saturday afternoon with several of his students for mincha services. Shavuot, the Jewish holiday which began May 28, marked the first time Baba Sale had hosted prayer services since the statewide shelter-in-place order was instituted in March.

But Rabbi Pinto was unable to see as far as the building, let alone make it to the door, as the group was blocked by a mass of civilians and police that were fighting for control of the street. Fairfax Avenue, which also abuts the Grove shopping mall, appeared to be the epicenter of looting activity.

Some of the civilians, he said, hurled epithets at the group, and one person threw a stick at one of his students.

“It was like looking at antisemitism, but in a time of rage,” Pinto said.

The group spent the rest of the evening locked in one of the students’ homes, waiting out the unrest.